Shopkeepers refuse to open despite India easing some curbs in Kashmir 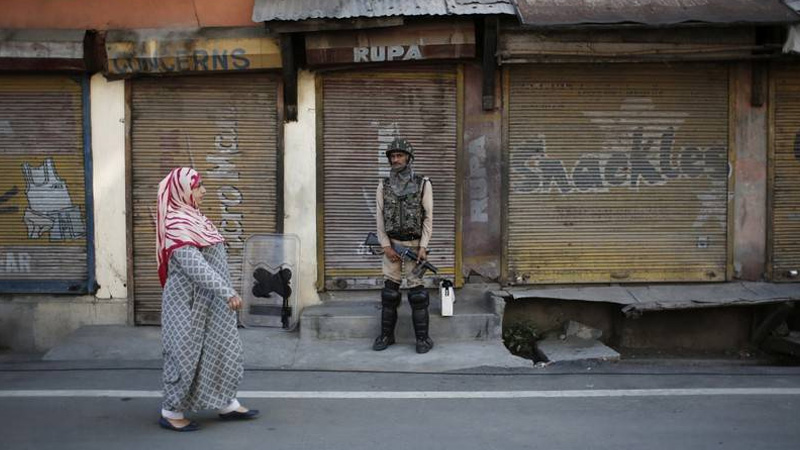 A month after India withdrew Kashmir’s special status, locked it down with thousands of additional troops and made mass arrests, residents are resisting attempts by authorities to show some signs of normalcy returning in the Muslim-majority valley.

To dampen the possibility of widespread protests, India flooded Kashmir – already one of the world’s most militarized zones – with troops, imposed severe restrictions on movements, and cut all telephone, mobile phone and internet connections. Thousands of people were arrested.

New Delhi has since eased some of the curbs although no prominent detainees have been freed and mobile and internet connections remain suspended.

Officials in Jammu and Kashmir’s summer capital of Srinagar say that 90 percent of Kashmir valley is free of restrictions on daytime movement, some landline phone connections have been restored and thousands of schools have re-opened. However, checkpoints remain in place and communication restrictions make reporting from the region difficult.

Despite the partial relaxation, many students are boycotting classes, shopkeepers are not opening up and public and private sector employees are not turning up for work, in informal action aimed at protesting against the government in New Delhi, according to interviews with seven government officials and dozens of residents of the valley.

“For us, our identity at stake and its safeguarding is our priority,” said Shabir Ahmad, a shopkeeper from the old quarter of Srinagar. “Let them restore it and we will re-start our businesses.”

The civil disobedience has sprung up alongside small but regular protests by stone-throwing crowds that have been quickly quashed by security forces with tear gas and pellet guns. In previous phases of protests in Kashmir, Kashmiri groups would issue official calls for shutdowns and protests. This time, however, Kashmiri leaders have been detained alongside mainstream politicians, including three former chief ministers and hundreds of other civil society leaders. In posters across Srinagar, which began appearing in late August, shopkeepers have been asked to only open late in the evenings and early in the mornings to enable residents to buy essentials. In the commercial areas of downtown Srinagar, the majority of shops remain shuttered. Despite security forces asking owners to return to normal opening hours, many have refused. “We were opening shops in the evenings for people,” said Ayub, a Srinagar shopkeeper. “The troops tell us either to open the shops for the full day or don’t open in the evenings.”

Rohit Kansal, the official spokesman of the Jammu and Kashmir state government, blamed ‘anti-national’ forces for preventing shops from opening. “Security forces have taken note of it,” he said. Attendance in major government offices in Srinagar is about 50% and those in smaller, subordinate offices in the city is substantially lower, a state government official said, declining to be named as he was not authorised to speak to the media.

At an office of the state housing and urban development department in western Srinagar, only 30 out of about 300 staff were in attendance on most days, another official said. “Only those who live nearby report to the office. The others come in once in a while,” the official said.

Government workers employed to tend Srinagar’s famous Dal Lake have not turned up for work in several weeks, officials said, and the water’s surface has become clogged with weeds. Many schools are empty. “How can I send my children to school? There is a clampdown and we are concerned for the safety of our wards,” said Javed Ahmad, a Srinagar parent. Kansal said that 4,000 schools in Kashmir are functioning, and that attendance is improving, although it remains low in some areas.

The shutdown and restrictions are having an impact across all areas of society. With tourists avoiding the region, hotel owners say occupancy rates are close to zero. Srinagar’s historic Jamia Masjid mosque has been closed for a month. Kashmir’s postal service is heavily disrupted, and online retailers, including Amazon, say their operations in Jammu and Kashmir remain suspended.

Pharmacists say there are shortages of some drugs because of logistical problems, particularly thyroid, diabetes, anti-depressant and cancer drugs.