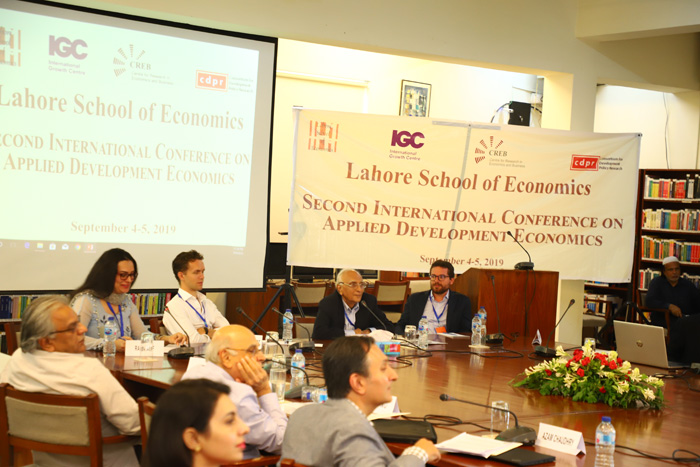 The Lahore School of Economics in partnership with International Growth Centre hosted its Second International Conference on Applied Development Economics, at its Burki Campus on 4-5th of September 2019.

Similar to the first edition of the conference last year, which was a great success, the two-day event this year was once again devoted to bringing together policymakers, renowned researchers, academics and practitioners from within Pakistan and abroad to discuss relevant themes for developing countries, such as poverty, social protection, gender, public finance, firms and political economy. The thought-provoking research presented at the conference was hoped to disseminate and invite interesting feedback, stimulate further research in this domain and be instrumental in improving research capabilities of young researchers within the country.

The conference started off with welcome remarks by Dr Shahid Amjad Chaudhry (Rector, Lahore School of Economics). He extended a warm welcome to a distinguished and impressive galaxy of academics, researchers and other honorable guests. He highlighted that it is a sensitive time for Pakistan with the brunt being borne by the poor and vulnerable segments of society especially with regards to food poverty. He emphasized the dire need for researchers to collaborate globally, so as to understand and address the complexities of the developing world. He highlighted on how this conference sets the stage for further deliberation on core developmental issues. The plenary address was delivered by Dr. Ghazala Mansuri (Lead Economist, World Bank) who took on a more policy-oriented approach towards issues in her insightful research focusing on water, sanitation and child health. She pondered over that it is puzzling that even though poverty has been on a declining trend in Pakistan, improvement in sanitation and access to safe drinking water – focal areas of MDGs – have been limited. She stressed on how stunting and wastage in children caused due to poor sanitation facilities, has an adverse impact on their motor skills and immunity, regardless of the household’s income level. She highlighted that these effects were more strongly felt in Sindh, and more so in rural than urban areas, due to inefficient human fecal waste management relative to Punjab, KP and Baluchistan. She also noted that only urban areas have access to piped water whereas hand and mechanized pumps are more commonly found in rural areas, with sporadic testing for water quality and contamination. This contamination, she explained, arises from effluent seeping into water ways and ground water used for drinking and irrigation of agricultural production which is highly detrimental to health. She concluded her address by proposing that there is a need to strengthen regulatory guidelines and enforcement mechanisms in this sphere as well as provision safe water and sanitation by the public sector.

The first session of the conference focused on poverty and the role of social protection in economic development. The chairperson for the session was Dr Shahid. The session was initiated by Jonathan de Quidt (Assistant Professor, Stockholm University) with his paper (written jointly with Dr. Gharad Bryan, Tom Wilkening and Dr Nitin Yadav) evaluating whether market design can contribute towards increasing efficiency in reallocation problems and hence in reducing poverty. The discussant for the paper was Sanval Nasim(Assistant professor, Lahore University of Management Sciences).