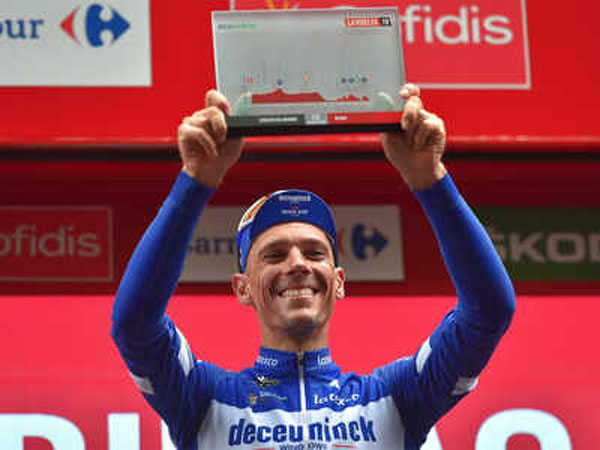 Belgian rider Philippe Gilbert earned the 10th Grand Tour stage victory of his career by winning stage 12 of the Vuelta a Espana on Thursday, whilst Primoz Roglic held on to the red jersey as there was no change in the general classification. Gilbert, 37, came into the Vuelta looking to prove himself after he was dropped by his team for the Tour de France and made his move on the final climb of the day with 40 kilometres to go. The Deceuninck-Quick-Step rider faced competition from Spanish pairing Alexander Aranburu and Fernando Barcelo but slowly increased his gap and maintained it during the downhill finale into Bilbao to win the 171.4 km hilly stage, which began in Circuito de Navarra.

He crossed the finish line three seconds ahead of Aranburu, who narrowly took second over Barcelo. The peloton finished three minutes and two seconds down so there was no change in the overall standings despite the best efforts of Miguel Angel Lopez, who attempted an attack but was quickly reeled in by race leader Roglic. “It was a long fight to get into the breakaway, when we went away I saw good climbers with me, and I wasn’t really confident about my chances to win,” Gilbert told reporters. “The atmosphere was crazy on the last climb, it was really like in the Classics with all the flags and everything.

“They gave me a lot of motivation. It’s also special because it’s my tenth victory at a Grand Tour so it’s a nice number.” The Vuelta moves back into the mountains on Friday for a 166.4 km ride from Bilbao to Los Machucos. Monumento Vaca Pasiega, where climbing specialists Lopez and Nairo Quintana will look to make up time on Roglic.