Literary journal Tasteer’s newest issue has something for everyone

* The present issue of Tasteer starts with the usual Hamd-o-Naat by Naseem-e-Seher and Jalil Aali, two proficient senior poets from Rawalpindi 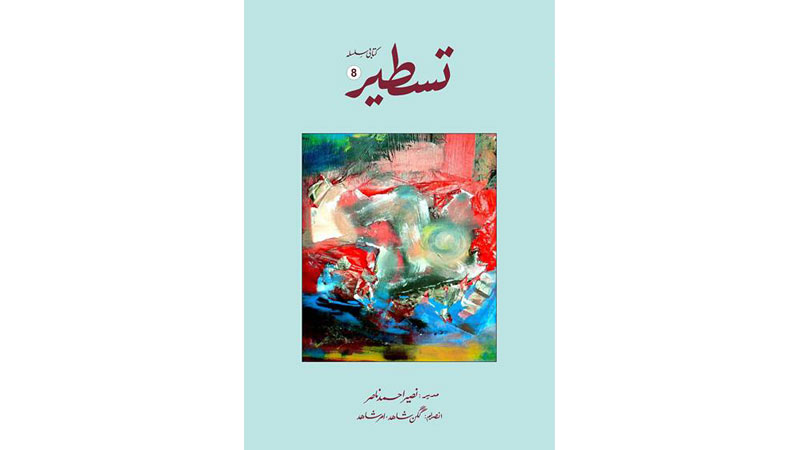 When I wrote that the August 2019 issue of literary journal Tasteer comprised 654 pages, it sounded like a heavy volume but it was not. Naseer Ahmad Nasir, a poet of international repute has been very regular in the publication of this literary magazine since many years. He says in his poem in the corner ‘Apni Bayaz Sei’ (from my collection) that he refused to sleep before dreaming (poem ‘Khwaab Daikhne Sei Pehle’ (before a dream – Page 392). The result was that he couldn’t sleep afterwards. He opened the windows but he was surrounded by glass walls. He freed the birds from their cages but was rewarded by cutting of all trees around him.

He started sitting under shadows of the trees but his eyes were filled with sunlight instead. This poem proves the poet can express the doom and injustices surrounding a man through metaphors. The next poem ‘Dhoop Kei Baghair Saaye’ (shadows without sunlight) is the story of riding a horse without reins. The last four lines are ‘Raat Humain Kab Talak Chupaye Rakhe Gi/Aik Din Uryani Hamare Jismon Sei Tuloo Ho Gi/Aur Hum Bhari Kainaat Main/Aik Doosre Ki Ankhon Sei Panah Mangain Gei’ (Till when night shall conceal our doings! One day nudity shall rise from our bodies. And we in whole of the universe shall avoid looking at each other). It is a satire on the degradation of our society. The other poems are ‘Aur Jab Tum Daikho’, ‘April Ki Aik Nazm’, ‘Patta Nahin Yei Nazm October Ki Hei Ya April Ki’, ‘Chaye Khane Main’ and others.

The present issue of Tasteer starts with the usual Hamd-o-Naat by Naseem-e-Seher and Jalil Aali, two proficient senior poets residing in Rawalpindi. Fahim Jozi contributes a guest editorial in tradition of quality literature and Facebook. He accepts this media to be an effective one; an extension of one’s communication skills. This medium has opened a dialogue between seniors and juniors (Page 18). So one foresees such an era that each person in this globe shall need to say poetry. Top quality literature shall even then keep its traditions intact.

The two essays in the chapter ‘Mubahis’ (debates) comprises one on whether post-modernism has died its own death by Dr Ahmad Suhail and ‘Meiyaar Ki Behes’ (the debate on standard of quality) by Rafiullah Mian.

The chapter on bygones (Lams-e-Rafta) comprises essays titled ‘Mera Aik Hi Naam Hei’ (I have only one name) by Abdul Rasheed, ‘Aik Nazm Abdul Rasheed Kei Liye’ (a poem for Abdul Rasheed) by Tabasum Kashmiri, ‘Mausam-e-Sarma Main Chiriya Ki Maut’ (death of a sparrow in winters) and ‘Zindigi Ka Akhri Bosa’ (the last kiss of life) by Hameed Qaiser. The latter is an obituary of poet Javed Akhtar Bedi in Bradford, UK.

A very unique corner in Tasteer is a dialogue with various personalities. This time Umar Farhat has it with Rasheed Amjad and Abul Kalam Qasmi. Writing on the childhood of famous writers is another nice addition in Tasteer. This time Dr. Uzma Saleem discusses childhood of poet Yasmin Hameed and Syed Zia uddin Naeem. Travelogues by Amjad Sheikh and Naeem Fatima Alvi are also included. A forbidden name Manto is in vogue now. Gopi Chand Narang writes on fresh reading of Manto’s works, Nizam Siddiqui on Manto’s Fiction’s effects and possibilities and finally Dr. Parvez Sheheryar on Manto’s artistic treatment of the Partition. Gopi Chand Narang says that many contemporary personalities like Raja Mahmudabad, Mahir ul Qadri of Hyderabad and Nawa-e-Waqt’s Hameed Nizami criticized. Ahmad Nadeem Qasmi was an exception who published Manto’s stories ‘Bu’ and ‘Khol Do’ in Naqoosh – Page 128.

Two essays by Edward Saeed and Nasir Baghdadi titled ‘Matan Ki Tafheem Ka Masa’ala’ (solution of the text)and writer Schopenhauer born in 1788 in Danzig (now part of Poland) by Zafar Sipal are included. Schopenhauer’s parents were of German-Dutch origin. He started his literary journey by writing biography of Karl Ludwig Fernow. He wrote novels also. He developed differences with his mother who was an established writer as after publication of ‘On the four fold roots sufficient reason’. He spent last 29 nine years in Frankfurt. In 1936 his book ‘On the Will of Nature’ was published. His book that was acclaimed was ‘Parerga and Paralipomena’ in 1951. He died on September 21, 1860.

Fourteen essays are included in the Criticism and Research section, the notable one is Dr. Akhtar Shumar’s analysis on Nasreen Anjum Bhatti’s poems (Page 250). In the present day’s media’s influence the only literature that lives is the one which has rigorousness of thought and emotions, freshness and depth in thought content. Nasreen’s poems had those qualities. That is why her name is taken with respect even now after her demise.

As expected the largest two sections are for poems (pages 297 to 381) and Ghazals (Pages 586 to 621). Most of the seniors along with juniors are included with their presentations. Appreciation and Appraisal include Jamil Ahmad Adeel covering Mahmud Zafar Iqbal Hashmi’s ‘Issi Kainaat Main’, Dr. Imtiaz Ahmad Baloch presenting a review on ‘Khwaabgah Main Rait’, Shahid Hinai talking about the poems that makes you sad and finally a review on ‘Aajizaana’ by Hafiz Muhammad Junaid Raza. Section ‘Sur Sanjog’ on music includes this reviewer’s essay on singer Habib Wali Muhammad who died five years ago. A brief introduction of Habib Wali Muhammad is reproduced here from this reviewer’s book Melody Makers. “He was born in Rangoon (now Yangon) in Burma (now Myanmar) to a conservative Memon family. I was disclosed of this fact when I visited Yangon in 1998 for Pakistan Day function organized by Pakistani Ambassador H. E. Javed Hafiz. The hall was packed with thousands of Indian/Pakistani origin crowd who were fond of watching PTV and loved its music. Even some of my songs which had been telecast once on PTV were being requested for rendering in my concert. One Ghazal ‘Lagta Nahin Hei Dil Mera Ujre Dyar Main’ of the last of Mughal Emperors Bahadur Shah Zafar, who lived in exile in Burma and his mausoleum is built there, was repeatedly asked to me to sing. This Ghazal had become popular in the voice of Habib Wali Muhammad. I was told that Habib Wali Muhammad had performed before two decades of my performance. Lot of Memon community was present and the following day a function was held in Memon Community House. Most of these people were thirsty to hear their language and music, being in land-locked country. On September 04, 2014 when I heard of demise of Habib Wali Muhammad joining the Almighty while in Los Angeles, USA at the age of 93, his resemblance to me became more pertinent on two accounts; his passion for music and following different profession. He had later moved to Bombay where he lived for ten years before migrating to Pakistan. His family, Tabani, an industrial house has large business holdings in Pakistan. His brother Ashraf W. Tabani was Governor of Sindh Province in 1988”.