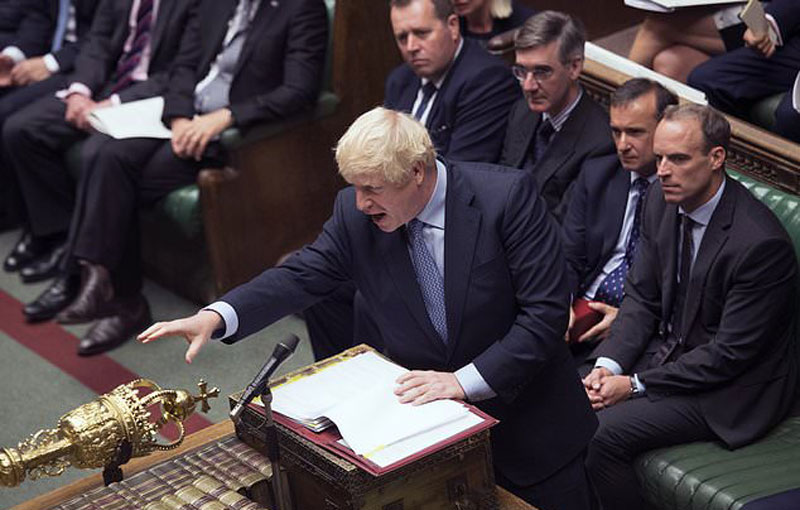 As British lawmakers battle over Brexit, they are making decisions of historic importance. But their language is often punctuated with wisecracks, insults and taunts more suited to the schoolyard.

During a testy House of Commons debate Wednesday, Prime Minister Boris Johnson accused Labour Party leader Jeremy Corbyn of ducking an election and being “a chlorinated chicken” – a reference to claims the U.K. will have to lower its food safety standards to get a post-Brexit trade deal with the United States.

Both comments were typical jibes from Johnson, a politician who has built a career on blustering charm and seemingly can’t resist a cheap joke or pun.

He also accused the left-wing Corbyn of wanting to emulate Venezuela, adding: “And I think he is ‘Caracas!'” – a play on the word “crackers.”

Such banter is nothing new in the chamber, despite its strict rules against “unparliamentary language.” It is forbidden to accuse another lawmaker of lying, and legislators must be referred to as “the honorable lady,” ”the honorable gentleman” or “my honorable friend,” rather than by name.

House Speaker John Bercow made no objection to Johnson’s jibes, or his use of a four-letter expletive starting with “s” to describe Labour’s economic policy.

What finally drew a rebuke, however, was when Johnson called Corbyn by his full name.

“We don’t name people in the chamber – people must observe the rules,” Bercow admonished.

Bercow, who has become a celebrity with his booming calls for “Orrrr-derrr!” during raucous debates, has his own repertoire of rhetorical flourishes, which includes telling off lawmakers for “chuntering from a sedentary position.”

Corbyn was criticized last year after appearing to call then-Prime Minister Theresa May “a stupid woman,” although he denied it.

In 2011, then-Prime Minister David Cameron was accused of sexism when he adopted a catchphrase from a popular commercial and told a female lawmaker to “calm down, dear.”

Many Britons see Parliament’s idiosyncratic – and arguably self-indulgent – use of language as evidence that politicians are hopelessly out of touch.

That gap is exemplified in pro-Brexit Conservative lawmaker Jacob Rees-Mogg, who has been nicknamed “the honorable member for the 18th century” because of his formal dress, ornate rhetoric and conservative views.