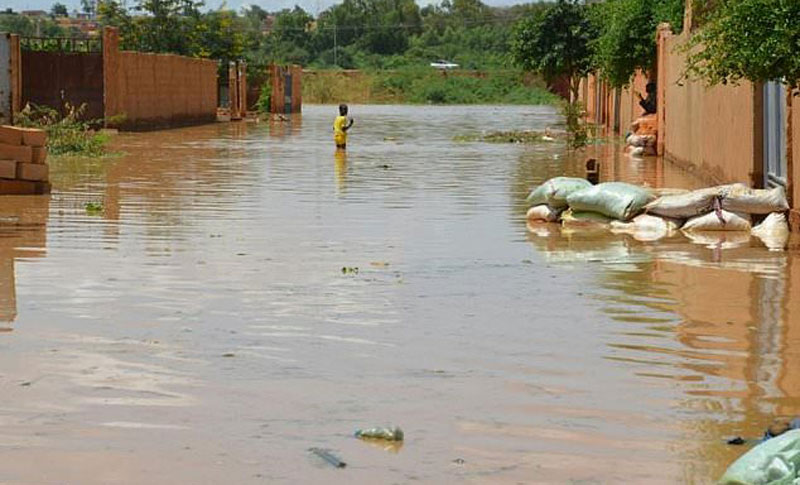 “That’s it, time to go!” As a rising swell of muddy water creeps towards his house in Niger’s capital Niamey, Mamoudou Barkire is finally leaving.

Deadly floods have swamped several parts of the city and the rest of the country, forcing thousands to flee as it demolished homes and turned streets into rivers.

And the 63-year-old retiree, propped on crutches, is joining them.

But leaving was not an easy choice. Barkire, whose neighbours left weeks ago, spent the past two days piling sandbags onto a clay wall he built in a futile bid to keep the water away.

“I barely have enough to feed my family on this measly pension, and now I risk losing my home”.

Extreme weather is an all-too-common phenomenon in Niger. Last year, drought and flooding led to food shortages in a crisis which, exacerbated by jihadist violence, left over 10 percent of the population needing humanitarian aid.

But the World Health Organisation (WHO) has warned that the current floods — sparked by exceptionally high water levels in the river Niger — could lead to a cholera epidemic.

The disaster has already claimed 42 lives. Only 25,000 of the 70,000 people affected by the crisis have received aid, said Lawan Magadji, Niger’s minister for humanitarian affairs.

Niger, one of the world’s poorest countries, is in the midst of its annual rainy season, which lasts three to four months over summer.

At the start of the week, water rose to 6.38 metres (21 feet) in Niamey, levels “not seen in more than 50 years”, the city’s governor Assane Issaka Karanta said.

It prompted authorities to trigger a “red alert”, which they renewed on Wednesday.

Even the arid Agadez region — home to a UNESCO-protected historic centre — has been hit.

In Niamey inhabitants have clubbed together in the struggle to save their neighbourhoods.

Children drag carts piled with dam-building materials through the streets, while women try their best to clean up courtyards brimming with water.