Riding out Dorian, over pancakes, in South Carolina 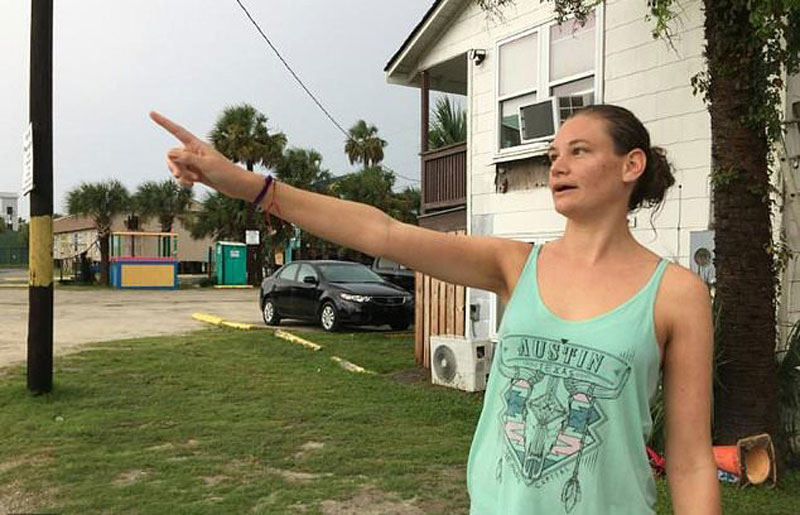 Kaycee Meyer enjoys a leisurely breakfast of pancakes as she pooh-poohs Hurricane Dorian and says she will ride it out.

She is among some in this small seaside town in South Carolina who are ignoring evacuation orders as the storm that leveled the Bahamas and killed at least seven people approaches the US. Meyer is sitting tight even though Folly Beach is situated on a small, narrow island.

Indeed, the 29-year-old school teacher likes the sudden peace and quiet of this town of 2,400, which is usually bustling in summer as surfers pour in.

Dorian hit the northern Bahamas a few days ago as a furious Category 5 storm, and then to make things worse, stalled over the islands, wreaking havoc for more than two days.

It is now a still-dangerous Category 2 storm with maximum sustained winds of 105 mph (165 kph). Dorian on Wednesday was 90 miles east of Daytona Beach, Florida and forecast to move near or over the coast of South Carolina and North Carolina Thursday through Friday.

“It´s kind of cool staying here. Nobody is there and it´s just the locals that are out in bars. Walking out last night on the beach there was barely anyone there. It´s kind of a cool experience,” said Meyer.

She is staying with her boyfriend, George Hubbard, 41, whose small house is very close to the beach and its crashing waves, which are getting bigger and bigger.

“So far so good,” Hubbard said.

Hubbard, who runs a now deserted parking lot and rents golf carts and bikes, says the storm is really hurting him financially.

This would normally be a profitable late summer week for him. But all around are empty hotels and homes.

“I don´t think the winds are going to be too bad,” said Hubbard although he acknowledges he and Meyer might move further inland later in the day.

“If it was a Category 5 we would be gone,” said Hubbard, who has long hair, a big smile and a vodka cocktail in his hand.

With Dorian down to Category 2, he said he is more worried about flooding than wind.

He even jokes about maybe going into the surf for a swim.

“Don´t go in that ocean,” warned his neighbor, 40-year-old Eddie Guidry, who prepared the pancake breakfast.

Unlike Hubbard, Guidry has boarded up his house. But he has no plans to leave. His roomate left Monday for Atlanta, as soon as the evacuation orders came down.

Another Folly Beach resident, Pat Hiban, calmly walks his dog along an empty road with big, deep puddles. It is raining hard.

Hiban, 53, does not want to leave, either. He says his wife is sick of false alarms. They have lived here for five years and endured a fair number of storms.

“When I bought the house, we didn´t know it would come every year like this,” said Hiban.

Last year, for instance, they left to avoid Hurricane Florence, and “nothing happened.” This time they stocked up on food and supplies and “charged up everything.”