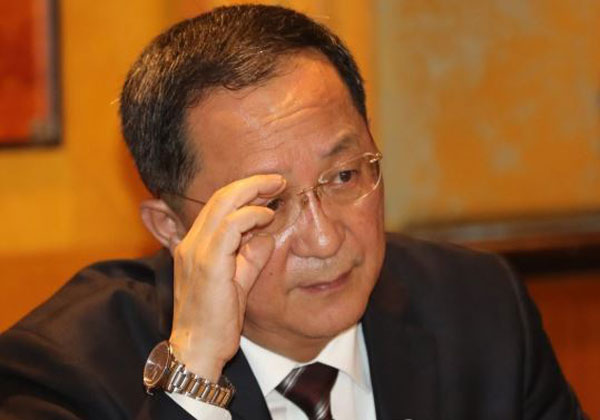 North Korean Foreign Minister Ri Yong Ho will not attend the annual gathering of world leaders at the United Nations later this month “due to his schedule”, the country’s mission to the UN told Reuters on Wednesday (Sep 4).

Ri has attended the high-level meeting of the UN General Assembly in New York for the past three years. North Korea was initially listed on a tentative speaking schedule – dated Jul 10 – to again be represented at ministerial level, but a revised agenda issued on Friday downgraded Pyongyang’s representation.

The United States is trying to kick-start stalled talks with North Korea aimed at dismantling Pyongyang’s nuclear and missile programmes. The UN Security Council has unanimously ratcheted up sanctions on North Korea since 2006 in a bid to choke funding for those programmes.

North Korea’s UN mission appeared to play down the absence of Ri, the country’s former chief nuclear negotiator, saying Pyongyang has been represented at various levels in the past.

The US State Department did not immediately respond to a request for comment. North Korean ally and neighbour China has encouraged the talks process and China’s top diplomat, State Councillor Wang Yi, visited Pyongyang this week.

US President Donald Trump has met with North Korea leader Kim Jong Un three times, most recently in June when he became the first sitting US president to set foot in North Korea at the Demilitarised Zone (DMZ) between the two Koreas.

They agreed then to reopen working-level negotiations, but that has not happened and since February North Korea has demanded that US. Secretary of State Mike Pompeo be replaced with a “more mature” person in the US negotiating team, while lauding the rapport built between Kim and Trump.

Last month Ri called Pompeo the “diehard toxin of the US diplomacy” who employs “hackneyed sanctions rhetoric.” Ri and Pompeo met on the sidelines of the UN General Assembly last year. They were also both part of a summit between Trump and Kim in Vietnam in February.