* Maj Gen Ghafoor says war becomes a compulsion instead of a choice when sovereignty of any nation is threatened
* Pakistan will support Kashmiris "till our last soldier, last bullet and last breath"
* Economy has started improving and will continue in days to come 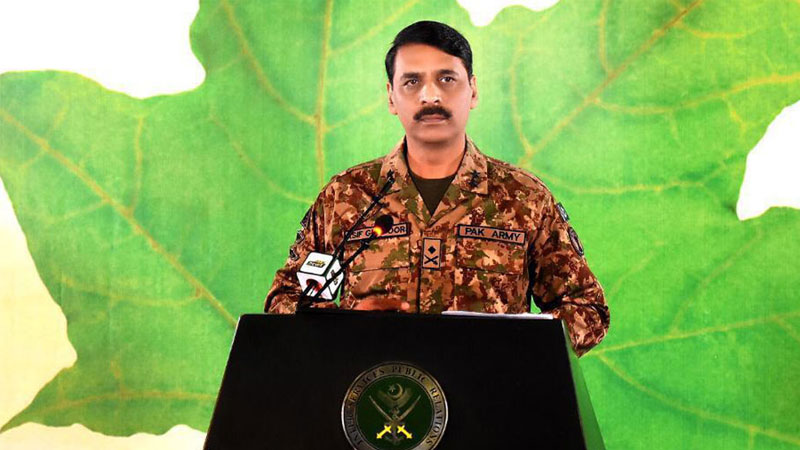 “The situation in Kashmir has become a big danger in the region … the Indian actions in Kashmir are sowing seeds of war,” the military spokesman said in a televised press conference. “We do not want to take the conflict to that point where the regional and world peace is endangered,” he added.

Reiterating unflinching support to the people of Indian-held Kashmir, Major General Ghafoor said wars are fought by nations to retain dignity and honour. “Army protects a nation’s sovereignty. When that is threatened, war fighting becomes a compulsion instead of a choice. It is up to India and the rest of the world,” he maintained. “Pakistan can go to any limit to support the Kashmiris for their just right to self-determination,” he added.

When his attention was drawn towards a recent press statement of the Indian defence minister on India’s ‘no first use’ doctrine on the use of nuclear weapons, Major General Asif Ghafoor said it is India’s unilateral initiative. Pakistan has never been into such commitment or made any statement on it, rather Pakistan has kept its options open, he added. “Kashmir is our jugular vein and we can go to any limit for their right to self-determination, whatever the cost may be,” he said, adding that the country’s armed forces are fully ready to respond befittingly in case a war is imposed from across. “Our economy is not too weak to fight a war. To extend help to our Kashmiri brethren, we will not look at our pockets,” he said in an unwavering tone.

Asif Ghafoor brushed aside rumors about striking any deal on Kashmir during the visit of Prime Minister Imran Khan and Chief of the Army Staff General Qamar Javed Bajwa to the United States. He termed such reports as part of the ongoing hybrid warfare. “How can you think that we can do a deal over Kashmir? We have not done thin in 72 years, why will we do that now?” the ISPR chief asked. “How come an individual, or any group, or party can strike any deal on a 72-year-old issue unilaterally?” he asked.

He said all the endeavors of Pakistan are meant for right to self-determination of the Kashmiri people, who have been braving the worst atrocities at the hands of Indian occupation forces. “Our message for them is that we stand with them in their struggle for freedom from India,” he said, adding that any understanding on Kashmir against the will of the Kashmiri people will be a betrayal to Kashmir cause. “We shall support Kashmiris’ struggle for right to self-determination till our last soldier, last bullet and last breath,” he reiterated. Maj Gen Ghafoor said Indian subjugation in the occupied valley reflects the picture of Hitler’s Nazism.

“Narendra Modi and RSS (Rashtriya Swayamsevak Sangh) are followers of Hitler’s philosophy and Kashmiris’ subjugation to inhumane atrocities reflects this very mindset,” he said. “India will suffer twice of that extent to which the people of Kashmir have been suffering,” he warned, adding that Pakistan has been target of Indian conspiracies since its inception in 1947 in terms of intelligence and economic warfare, but has never bowed to their expansionist agenda.

He said earlier India had refused to accept consular access for Kulbhushan, but later it accepted Pakistan’s all five terms for the purpose, which included video recording of the proceeding of the meeting, besides allowing none other than Indian High Commission’s official in Pakistan to meet Kulbhushan. He said all the five points by Pakistan were in accordance with the international laws.

In reply to a question regarding the country’s economy, he said indications towards its deteriorated health were given much earlier in the past, but the people at the helm of affairs at that time had rejected those. It had attained alarming proportions at that time but went unheeded that caused its further degradation, he said, and added that it has suffered cancer which cannot be cured by administering a pill used to cure fever. “It requires a lengthy and thorough procedure for treatment which is specifically required to cure a lethal disease of cancer,” he said. However, he said that things have started improving and will continue in the days to come.

To a question regarding the episode of Osama Bin Laden, he said Pakistan shared the first information about him with the United States, which later carried out operation in isolation.

Expressing the strong desire for restoration of complete peace in Afghanistan, he said Pakistan has already been making sincere efforts to bring both the United States and Taliban on the table and will continue efforts to facilitate peace efforts. The factions in Afghanistan are learnt to have reached near striking a peace deal, he added.

In connection with the Pakistan Defence Day celebrations, he appealed to the nation to visit the places belonging to the martyrs and exchange sympathies with their kins and loved ones to remind them that the entire nation is with them.