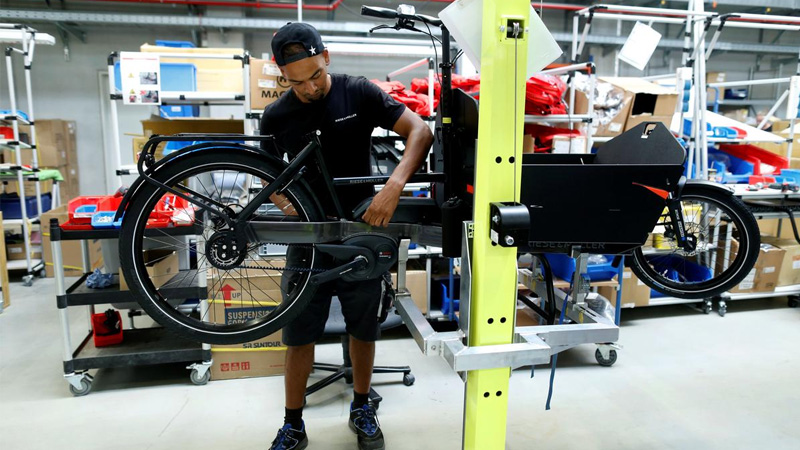 Think tricycles for the age of global warming: A rising number of environmentally conscious Germans are buying electric cargo bikes, which last year outsold electric cars in a country known for its love of the combustion engine.

Climate change is the top concern for Germans, opinion polls show, but government subsidies to boost sales of electric cars have not gained traction. Only 36,000 electric cars were sold in Germany last year, compared with 25,000 in 2017, according to motor vehicle authority KBA.

The picture is much rosier for electric cargo bikes, three-wheeled vehicles that have a motor to help with pedalling and a large cargo basket that can fit kids, pets and shopping and so make them popular with parents.

The Two-Wheel Industry Association (ZIV) keeps data on the machines and says 40,000 were sold last year, almost twice as many as in 2017.

“I think Germans have realised, especially in cities like Berlin and Frankfurt that a cargo bike can replace a second car,” said ZIV head Siegfried Neuberger.

“You can use it to go shopping, you can take the kids to daycare and so it’s very practical, environment-friendly, sustainable and healthy, which makes it very attractive to Germans,” he added.

It was such attributes that prompted Karen Lebek, a water security researcher at the Humboldt University who lives with her husband and two daughters on a leafy street in southwest Berlin to buy an electric cargo bike.

“It makes everything easy,” said Lebek, carefully placing a bag of apples from a street fruit vendor next to her 4-year-old daughter in the basket.

“You can go wherever you want without having to worry about parking,” she added. “The kids love it because they can just hop in and out and they can bring friends along because the cargo basket fits four children.”

Lebek and her husband now plan to sell their seven-seater car and will rely on the electric bike, bought for 2,500 euros ($2,786), for their transport.