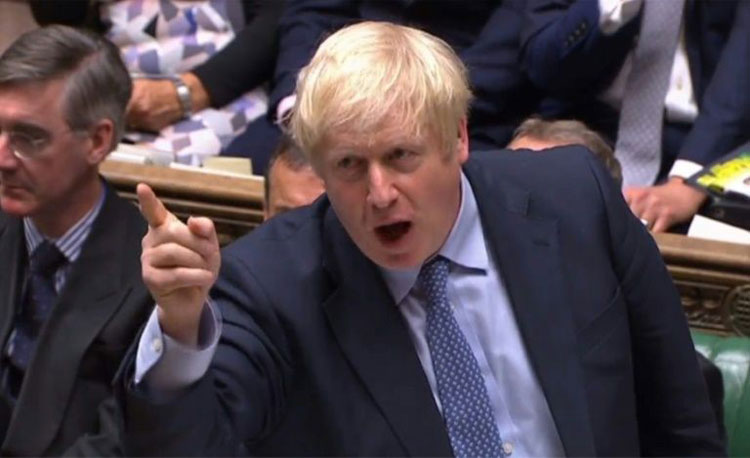 British lawmakers inflicted a fresh defeat on Prime Minister Boris Johnson’s Brexit strategy on Wednesday, approving in principle a law that could stop him taking Britain out of the European Union without a deal next month.

In a second parliament revolt in as many days, the House of Commons voted by 329 to 300 in favour of a draft bill that could delay Brexit for three months, although it must still pass further stages to become law.

Johnson has warned he would call an early election on October 15 if the legislation went ahead, insisting Britain must leave the EU as planned on October 31, with or without a divorce deal with Brussels.

He vowed he would “never allow” the delay, insisting the draft law would “surrender” control over Brexit negotiations to Brussels.

The government has already introduced a motion for a vote later Wednesday calling for a snap election to take place before an EU summit on October 17.

In yet another twist in the tortuous Brexit process, however, the opposition Labour party is expected to withhold its support for an election, which requires the backing of two-thirds of MPs.

The defeat comes the day after MPs defied the government in a preparatory vote on the draft Brexit bill on Tuesday evening, including 21 of Johnson’s own Conservative lawmakers — several of them distinguished former ministers.

He expelled them all from the party, depriving his six-week-old government of a parliamentary majority.

However, Downing Street said Johnson would not be resigning whatever happens on Wednesday — and US President Donald Trump offered him his support.

“Boris knows how to win. Don’t worry about him. He’s going to be OK,” he told reporters in the White House.

Johnson took office in July, three years after the 2016 referendum vote to leave the EU, promising to deliver Brexit whatever happens.

He says he wants to renegotiate the divorce deal his predecessor Theresa May agreed with Brussels, arguing that his threat of leaving with “no deal” will force EU leaders to agree better terms.

But the bloc has so far refused, and a senior EU source on Wednesday poured cold water on the idea that any last-minute deal could be struck at a Brussels summit next month.

The European Commission meanwhile said Britain had not yet come up with any alternative for the most controversial bit of the current deal, relating to the Irish border.

Labour leader Jeremy Corbyn said the negotiations Johnson talked about “are a sham — all he’s doing is running down the clock”.

But Johnson insisted his team, which met with customs experts in Brussels on Wednesday, was making “substantial progress” in getting a deal.

The European Commission also said the risk of a “no deal” exit has increased, a prospect many fear because of the economic damage it could cause after almost half a century of close ties with Britain’s closest neighbours.

However, Bank of England governor Mark Carney said Wednesday the institution believed the impact would be “less severe” than previously forecast, in part because of government preparations.

On Tuesday night, rebel Tories and opposition MPs voted to clear the Commons timetable on Wednesday afternoon to debate their own Brexit legislation.

Their bill would force the government to delay Brexit until January 31 unless it has agreed an exit deal or secured MPs’ approval for “no deal” by October 19.

But it also raises the prospect of rolling Brexit delays, and Johnson warned it would only cause “more confusion” and wreck any hopes of a deal.

To take effect, the bill must be approved by MPs and the unelected House of Lords in the next few days, as Johnson has controversially decided to suspend parliament next week until mid-October.

Johnson earlier challenged Labour leader Corbyn to back his call for an election, to “let the people decide” how to resolve the Brexit impasse.

However, Labour is expected to abstain amid internal debate about whether to hold an election before or after Brexit.

“We’re not going to be voting with Johnson today. We want a general election, but we’re not dancing to his tune,” Labour Brexit spokesman Keir Starmer said.

Johnson has received a poll boost for his tough talk on Brexit, but the political landscape has been fragmented by the EU issue.