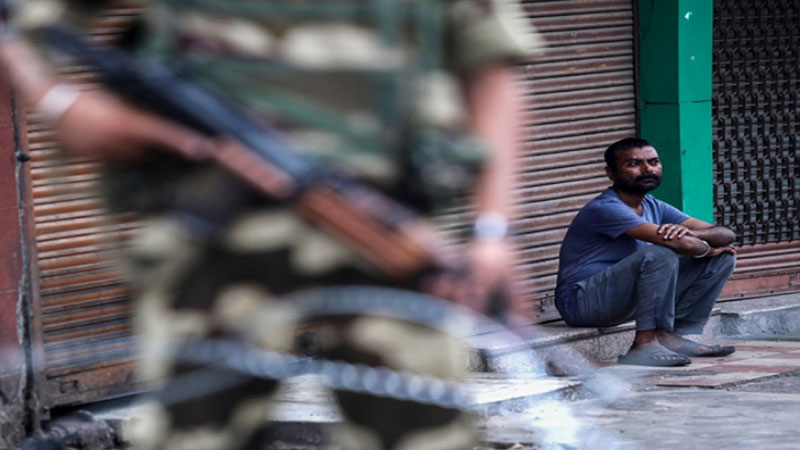 A man has died in Indian-held Kashmir nearly a month after he was injured during a protest, the first official death since India flooded Kashmir with troops, prompting tighter security in parts of Srinagar fearing a reaction.

Asrar Ahmed Khan, 18, from the region’s main city Srinagar, died on Tuesday night in hospital, succumbing to wounds he suffered a month ago, officials said. “He was reportedly injured with a blunt object in a law and order situation where a violent crowd was indulging in stone pelting,” Jammu and Kashmir Director General of Police Dilbag Singh said. Some protesters said Khan was hit by a tear gas canister, though authorities suspected a stone struck him, Singh said, adding that the matter is under investigation. Khan had been admitted to Srinagar’s Sher-i-Kashmir Institute of Medical Sciences with wounds to his head, and was undergoing treatment in an intensive care ward, a government official said, declining to be named.

Media has reported at least two other deaths during protests, but authorities have denied that.

Parts of Srinagar’s old quarter, which has often been a center for protests, were locked down on Wednesday, a government official said. Concertina wire barriers have been strung across roads, manned by armed paramilitary in full-riot gear, and movement of people had been tightened, a witness said. “These are normal day restrictions in that area and some extra precautions on likely law and order scenario,” said Singh.

India flooded the Kashmir valley with troops, restricted movements and cut off communication as Prime Minister Narendra Modi withdrew special rights for Kashmir on Aug 5. Indian-held Kashmir lost its right to frame its own laws and non-residents were allowed to buy property there. Mobile and internet connections have been off for 31 days. Hundreds of political leaders and activists, including three former chief ministers, have been detained.

Prime Minister Imran Khan this week warned of the risk of war with India, but said Pakistan will not act first. Pakistan has sought the support of the United States, Britain and others to press India over Kashmir, but India has ruled out outside involvement.

The Indian military claimed on Wednesday it has detained two suspected members of Lashkar-e-Taiba trying to cross into Held Kashmir. “Pakistan is attempting infiltration every night,” Lieutenant-General KJS Dhillon told a briefing. “Some of them are getting eliminated, some of them are getting foiled and they are returning back to the Pakistani army post from where they were launched,” he claimed.

Separately, India’s Foreign Ministry said it has taken up with Britain reports of vandalism at the Indian High Commission in London during a protest over Kashmir on Tuesday.