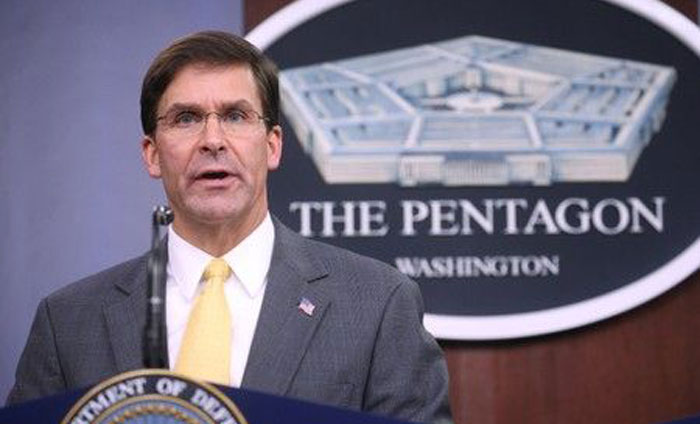 US Defense Secretary Mark Esper said on Wednesday he would limit his comments on talks between the United States and Taliban because negotiations were still ongoing “in some ways,” even as details of a draft deal have been publicly announced by President Donald Trump and a senior US diplomat.

The United States would withdraw almost 5,000 troops from Afghanistan and close five bases within 135 days under a draft peace accord agreed on with the Taliban, the chief US negotiator Zalmay Khalilzad said on Monday.

The deal, reached after months of negotiations with representatives from the insurgent movement, must still be approved by Trump before it can be signed.

However, the distance that must still be covered before peace is achieved was underlined by a Taliban attack on a housing complex used by international organizations in the Afghan capital Kabul late on Monday that killed at least 16 people.

“Ambassador Khalilzad is still obviously making his way around the region, talking to folks, and I haven’t gotten the latest update from him, but negotiations in some ways are still ongoing, so I don’t want to say anything that gets in front of that or upsets that process,” Esper told reporters traveling with him to Europe.

The future of US forces in Afghanistan is likely to be a topic of discussion during Esper’s brief trip, which will include stops in London and Paris.

Privately, US officials have told Reuters there is concern any deal could easily be violated by the Taliban, which they do not trust.

“The best way forward is through a political agreement through all sides and to get on that type of trajectory, because right now we’ve been in 18 years of conflict and if we stay on this continued path it doesn’t look like it’s ending anytime soon,” Esper said when asked what his message to his European counterparts would be on Afghanistan.

He declined to provide any details of the talks, despite being asked multiple times.

Esper said he would be meeting NATO Secretary-General Jens Stoltenberg in Stuttgart later on Wednesday and would reiterate the importance of allies in Afghanistan and that “if we come out, we’ll come out together.”

Esper is also likely to be asked about tensions with Iran. On Wednesday, Iranian state television said Tehran will free seven crew members of the detained British-flagged tanker Stena Impero. Esper said he had not heard the news about the Stena Impero crew, but if they were going to be released that would be a positive thing.