* Adviser says government will clear all verified sales tax refund claims filed till 2015 and income tax refunds of up to Rs 100,000 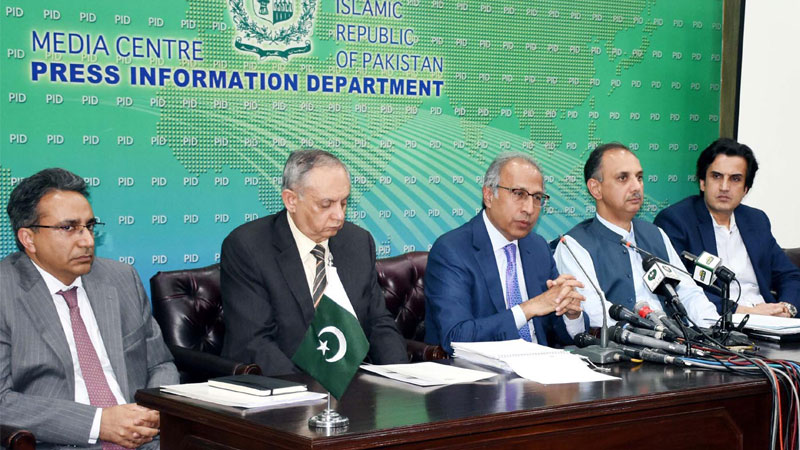 The government is confident to surpass the growth target of 2.4 percent set for the current fiscal year (2019-20) as after gaining stability on external front during the past year, the economy has been currently moving in the positive direction, Advisor to Prime Minister on Finance and Revenue, Dr Hafeez Shaikh said Wednesday.

Addressing a press conference along with economic team of the government, the advisor said there had been considerable growth in exports, which grew from $2.01 billion during first two months of last year to Rs 2.23 million this year, while imports have declined from $5 billion to $4.1 billion, reducing overall current account deficit of the country by 73%.

On the other hand, the overall revenue has also increased from Rs 509 billion during the first two months of the last year to Rs 580 billion during the current year, showing 25 percent growth. He was of the view that keeping in view the decline in imports, there has been decrease in revenues adding that the non imports revenues surged by 40% during the period.

Hafeez Shaikh said that the government would clear all the verified sales tax refund claims, filed till 2015, which would benefit around 10,000 people adding that business community of the country had lauded this initiative.

He said that Income tax refunds of up to Rs 100,000 since 2015 would also be cleared to benefit middle income people.

He said that the government had introduced a system with no human intervention to ensure immediate refunds to exporters, adding that the system, which was being labeled as ‘Faster’, has already been implemented and operational since

August 23. It would clear refund claims of previous month upto 16th of the next months, he added.

On issue of Gas Infrastructure Development Cess (GIDC), he said that the government had decided to refer the matter to Supreme Court for guidance and cleared that the government decision would be taken on the basis of three basic principles i.e. decision is in accordance with the law, for the public interest and through transparent process. Talking about the stability phase, the Advisor said that after assuming the power, the government focused on external sector and had an agreement with the International Monetary Fund which had been widely appreciated. It also engaged with World Bank and Asian Development Bank, he added.

He said that private sector, vulnerable segments of society and ignored regions of the country were given special attention in the budget.

In addition, the government also took austerity measures and reduced government expenditures by Rs 50 billion, besides freezing expenditures of military and pay of high officials. To a question, the Advisor said in order to control prices in the country, the federal government was increasing coordination with the provincial governments.

With respect to floating of bonds in the international market, he said in few weeks, the people will get concrete news.

To another query regarding recovery of US $ 800 million stuck up since 2006 during privatization of PTCL, Hafeez Shaikh said that the government was initiating renewed efforts in this regard.