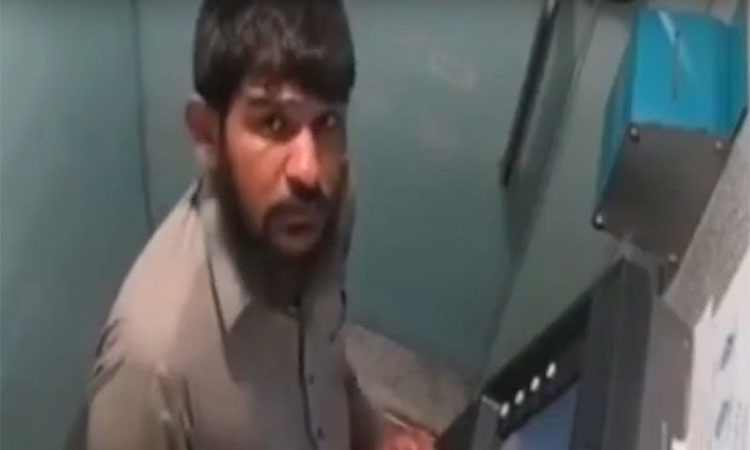 The father of Salahuddin Ayubi – a suspected ATM robber who died in police custody – alleged on Wednesday that his son was subjected to brutal torture by officials of the City A-Division police station.

Ayubi was arrested by police in Rahim Yar Khan for allegedly robbing an ATM last week and was reported dead on Sunday. On Monday, a First Information Report (FIR) was lodged against City A-Division’s Station House Officer Mehmoodul Hassan and investigation officers Sub-Inspector Shafaat Ali and Assistant Sub-Inspector Matloob Hussain on the complaint of Ayubi’s father Mohammad Afzaal, who said that his son was mentally challenged.

Earlier, Afzaal’s legal representative Usama Khawar Ghuman shared with the media pictures of Ayubi’s body in which multiple bruises could be seen on the deceased’s arms and legs. The lawyer insisted that the bruises were “clear evidence” of torture. The pictures were taken before Ayubi was buried in Kamoke, a city in Gujranwala district, Ghuman said.

The lawyer regretted that the officials nominated in the FIR were still roaming free but said that they would “knock at every door” to get justice. He expressed hope that Ayubi’s case would end the “cruel culture” of police brutality.

Meanwhile, the district police officer of Rahim Yar Khan wrote a memorandum to a sessions judge and requested that a judicial inquiry of the matter be conducted by a magistrate.

Police spokesperson Zeeshan Randhawa, in a statement, urged the public not to “doubt the sincerity of the police” and wait for the report of the judicial inquiry. He said that the officials who were nominated in the FIR had been suspended and added that “if [police] had mala fide intentions, they could have hidden Salahuddin’s body and announced that he had escaped.”

“The police did not cover up [the matter],” the statement said.

A video of Ayubi, a resident of Gujranwala, had gone viral on social media a few days ago in which he could be seen breaking into an ATM in Faisalabad and sticking his tongue out in jest at both the camera in the corner of the booth and the one installed in the machine itself.

He was arrested in Rahim Yar Khan last week after he was allegedly caught stealing from an ATM machine. According to Randhawa, Ayubi was behaving like a “mad man” in lockup when he suddenly became unwell. He said that the man was unconscious when he was shifted to the emergency ward of Sheikh Zayed Medical College Hospital, where doctors confirmed his death.

Earlier, in August, HRCP investigated reports that two young Hindu boys in Mirpur Khas – accused of murder – were allegedly subjected to torture while in custody, resulting in their deaths. In Punjab, in the last week alone, there have been three incidents involving death in custody in Lahore, Gujjarpura and Rahimyar Khan.

The latter case, in which Salahuddin Ayubi, a mentally disabled man accused of robbery, died while in police custody has, understandably, led to public outrage. Yet torture and ill treatment in custody are entrenched practices that are considered at best ‘acceptable’ and, at worst, ‘necessary’. Moreover, there are invariably delays in the post-mortem reports that should follow on the heels of any allegations of custodial death.

HRCP has already met the police authorities in Punjab and Sindh, and reiterated that the use of torture and humiliating, inhuman or degrading treatment is unacceptable – irrespective of the accusation or charge. HRCP has been reassured by the authorities in Punjab that they are willing to work closely with the Commission to protect human rights standards as an integral part of police procedures.

The inquiry into Salahuddin Ayubi’s death in custody is a positive sign, as is the recent establishment of a human rights cell in the Sindh Police. But respect for the inviolability of human rights must be embedded into police training and structures – matched by the necessary resources – if the police are to serve as protectors rather than antagonists. Moreover, such efforts need to be bolstered by an enforceable legal framework that criminalises torture, something on which the state must not procrastinate any longer.