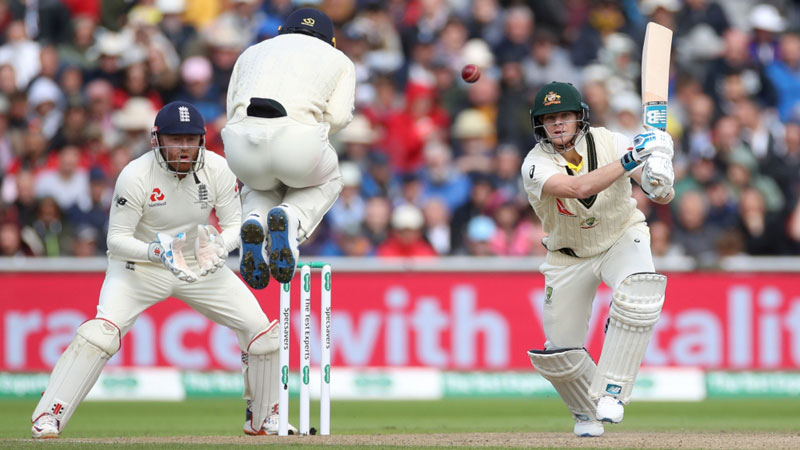 Steve Smith continued his outstanding Ashes form, striking an unbeaten 60 as Australia recovered from another failure by their openers to reach 170-3 on the first day of the fourth Test against England at Old Trafford on Wednesday. Rain caused a two-hour 20-minute delay after lunch but that did little to disrupt Smith, returning from missing the last test due to concussion. The series is tied a 1-1 with two Tests remaining and victory for the Australians would ensure they retain the urn. Smith and Marnus Labuschagne put on 116 for the third wicket before the latter was bowled by a beautiful delivery from Craig Overton for 67.

It was a much-needed stand after England, on a high after their remarkable comeback win at Headingley, made a great start, bringing their supporters to their feet with just the fourth ball of the day. Stuart Broad claimed the wicket of David Warner for the fifth time in this series with the left-hander caught behind as he made a belated decision to leave the ball but gave a thin outside edge to Jonny Bairstow. Australia found themselves at 28-2 when Broad rapped the pads of Marcus Harris and, after some consideration, umpire Kumar Dharmasena raised his finger and his verdict was upheld by video review. Australia’s openers have averaged 15.14 – not since 1888 have their top two contributed less during an Ashes series.

The departure of Harris brought the returning Smith to the crease after 38 minutes of play, the world’s number one-ranked batsman having missed the previous test due to concussion as a result of a bouncer from Jofra Archer. To the delight of the crowd, Archer had the ball in hand and it took him three deliveries to attempt another bouncer. But with England sensing a chance to eat into the Aussie middle order before lunch, Smith and Labuschagne quickly settled and set about upping the run-rate. Labuschagne, retained in the side after replacing Smith as a substitute for the second innings at Lord’s and at Headingley, went on to make his fourth straight half century. Ominously for England, Smith, who has two centuries and a 92 to his name in the series, looked as if he had never been away as he calmly dealt with Joe Root’s attack. Australia captain Tim Paine had won the toss and chose to bat with fast bowler Mitchell Starc given his first appearance in the series after replacing Peter Siddle.