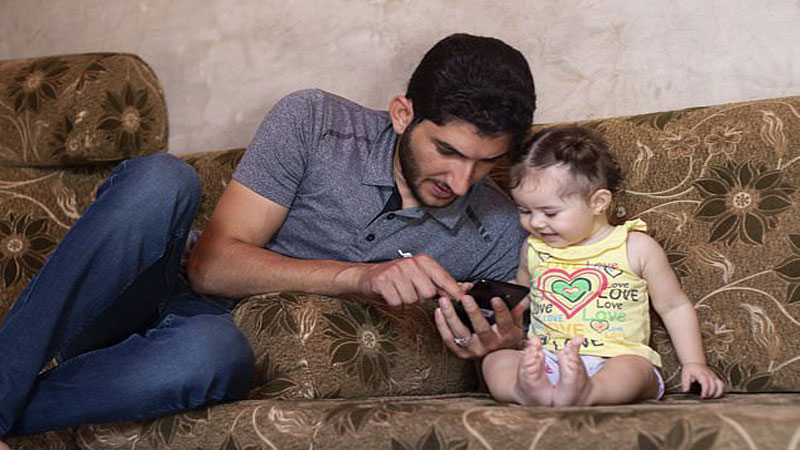 When Abdel Hamid al-Yousef lost his 9-month-old twins in the poison gas attack that hit the Syrian town of Khan Sheikhoun in April 2017, the world witnessed his heartbreak and grief in the video of him cradling their lifeless bodies in his arms, bidding them farewell in the chaotic aftermath of the attack.

Determined to continue with his life despite the pain, he has since remarried, and now has a 1-year-old daughter who brings much needed joy to what remains of the family. But tragedy keeps chasing the 31-year-old former shopkeeper.

As Syria’s civil war edges toward a bloody end, many displaced persons like al-Yousef fear that a government win will bring little relief – or sense of closure.

Al-Yousef recently fled Khan Sheikhoun again, joining tens of thousands fleeing heavy airstrikes and bombardment as government forces swept into the town, on the southern edge of the country’s last rebel stronghold in the province of Idlib.

He now lives among thousands of other internally displaced Syrians in a settlement near the Turkish border, worried he will never be able to go back to the hometown he left behind.

“I buried the most important thing I have in my life there, my children and my siblings. I used to find some relief by visiting them twice a week at the grave,” he told The Associated Press in a recent interview. “I cannot do that anymore.”

Most of all, al-Yousef fears the takeover by President Bashar Assad’s forces of Khan Sheikhoun means that any leftover evidence from the April 2017 toxic gas attack will now be erased forever.

“The biggest fear now, after regime forces and the Russians and allied militiamen took over Khan Sheikhoun is that they will tamper with the evidence with regards to the chemical weapons attack and distort the facts,” he said.

The attack in opposition-held Khan Sheikhoun in the early morning of April 4, 2017 left residents gasping for breath and convulsing in the streets and overcrowded hospitals. Nearly 90 people were killed in the attack, one of the deadliest in years.

At the time, the United States, Britain and France pointed a finger at the Syrian government, saying their experts had found that nerve agents were used in the attack. Days later, the US fired 59 US Tomahawk missiles at the Shayrat Air Base in central Syria, saying the attack on Khan Sheikhoun was launched from the base. It marked the first western airstrikes on targets of Assad’s government since the start of the conflict in March 2011.

The Syrian government and its Russian allies denied there was a chemical attack, while Syrian officials later said the air force bombed a rebel arsenal that had chemical weapons stored inside.

From his tent in the displaced settlement near the Turkish border called “Mokhayyam al-Karamah,” Arabic for “Dignity Camp,” near the town of Atmeh, al-Yousef recalls that fateful day when he lost his twins, Aya and Ahmed, his wife Dalal and 16 other relatives.

It is a story he has told dozens of times, about how Khan Sheikhoun residents woke up at half-past six in the morning to the sound of explosions. How people started running out of their homes and onto the street, trying to help each other. How he told his wife to take the twins to safety outside. The people he saw foaming at the mouth and nose.

He recalls how he ran to his brother’s house to find him and his family dead. His other brother and nephew, also dead. His niece who was around 13, also dead. He lost consciousness and woke up four hours later to be told that his twins and wife had died. They were among the 89 people who died from what experts have determined was an attack using sarin, an outlawed nerve toxin.

In footage filmed by his cousin that was widely circulated later, al-Yousef, 29 years old at the time, is seen seated in the front seat of a van cradling his twins, holding them in each arm. He stroked their hair and choked back tears, mumbling, “Say goodbye, baby, say goodbye.”

Al-Yousef keeps photos and videos of the attack’s aftermath on his phone that he flips through from time to time.

He sits on the floor and plays Lego with his 11-month-old daughter, whom he named Aya, after his first daughter. Her hair is in curly pigtails and she is wearing a sleeveless yellow T-shirt with the words “Love” printed on it and a heart in the middle.

Al-Yousef said that after spending some time in Turkey for treatment after the gas attack, he then chose to return to Khan Sheikhoun, held by rebels.

He decided to try and build a new life and a new home. He got married and had Aya. He gradually found some happiness.

But then government troops began an assault on Idlib and the nonstop bombardment of Khan Sheikhoun returned. A new wave of civilian displacement began. As the bombardment got unbearable and the troops encircled the town, he decided to leave, fleeing with the masses to safer areas near the Turkish border.