How Italy’s ‘Captain’ Salvini steered his ship onto the rocks 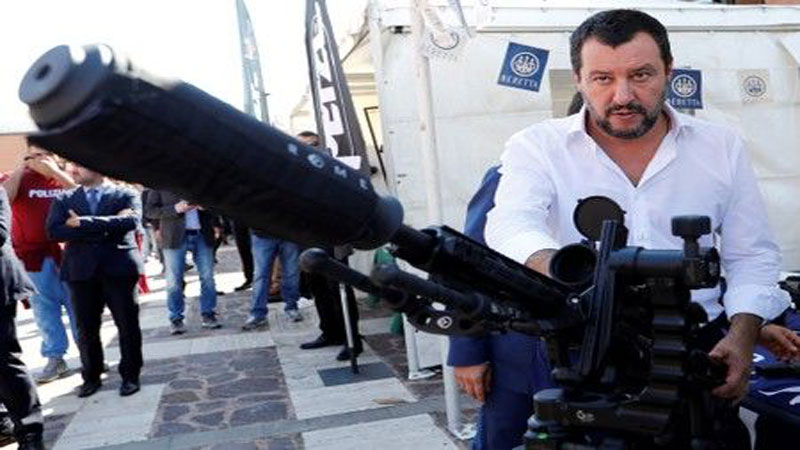 At a closed-door meeting on Aug. 6, Matteo Salvini’s advisers told the populist Italian politician he was trapped in an unproductive coalition government and should bring it down.

The next day, Salvini told Prime Minister Giuseppe Conte he was pulling his League party out of its ruling alliance with the 5-Star Movement, hoping to trigger an election that would return him to power as the unquestioned leader of a new government.

The League’s eurosceptic leader, riding high in the opinion polls thanks to his hard line on immigration, had just made a major miscalculation.

Salvini’s plan rested on two key beliefs: that Conte would promptly resign, and that 5-Star and the opposition Democratic Party would be unable to bury their deep-rooted mutual enmity to join forces against him, five sources, including the League’s economy chief Claudio Borghi, told Reuters.

But Salvini was proved wrong on both counts.

Italy’s once-dominant politician, known as “The Captain” by his followers, is now on the verge of opposition wilderness, a mere spectator as 5-Star and the centre-left Democratic Party (PD) form a government without him.

A master of galvanising the masses with his fiery rhetoric and social media savvy, Salvini’s dramatic reversal of fortune shows that he lacked a similar mastery of the political cut-and-thrust in the corridors of power in Rome.

Despite this summer’s chastening experience, Salvini does still remain a potent political force and could be back – especially if a new 5-Star/PD government proves short-lived.

Borghi told Reuters Salvini had been resisting internal party pressure to trigger elections, including from Borghi himself, but eventually relented at the August meeting.

“Lots of us were telling him he had to bring down the government, even though we know there were risks,” said Borghi, who attended the Aug. 6 gathering.

Salvini’s plot to ditch 5-Star and win power alone after months of bickering over economic policies and relations with the European Union, started to go wrong from the off when Conte declined to relinquish power.

That was not what Salvini had expected. A senior League source said Salvini’s low-profile number two, Giancarlo Giorgetti, an eminence grise who does much of the party’s back-room power broking, had assured him Conte would go.

Instead Conte, a law professor plucked from obscurity to lead the coalition government, showed he had no intention of returning to academia. Rather than resign, he demanded to know why Salvini wanted to bring down the government and called for a transparent parliamentary debate.

With parliament in recess for the summer break, that meant lawmakers first had to be summoned from their holidays – giving them time to come up with a plan to thwart Salvini’s ambitions.

“In order to bring down the government he should have withdrawn the League’s ministers from the cabinet rather than just asking Conte to resign,” said Roberto Maroni, a former interior minister and Salvini’s predecessor as League leader.

“He gave his adversaries time to negotiate and create a new government.”

With Conte sitting tight, the League filed a no-confidence motion in its own government, hoping to topple it as soon as parliament reconvened on Aug. 12.

But the 5-Star Movement and many Democratic Party lawmakers were furious about Salvini’s manoeuvring and returned determined to check his sprint towards a snap election.

They refused to even schedule Salvini’s no-confidence motion – instead giving priority to the debate demanded by Conte.

“Salvini miscalculated the timing, he wanted a blitzkrieg but ended up stuck in the trenches,” said Francesco Galietti, head of Policy Sonar, a political risk consultancy in Rome.

Salvini’s August gambit was not only mistimed because parliament was closed, but also because it meant any election would have interrupted preparations for a crucial 2020 budget.

In Italy, budget season is a drawn-out process which occupies parliament from the start of October to the end of the year. Dissolving the assembly during this period is so taboo that elections have not been held in autumn since 1919.

This handed Salvini’s opponents a perfect excuse to resist his election push. They said they had to save Italians from a big increase in sales tax Rome had promised the European Commission it would enact unless alternative savings could be found in the 2020 budget.

If Salvini had made his move straight after a triumph in European Parliament elections in May when the League took 34% of the vote, national elections could have been held in July – avoiding the risk of stalling such a key budget.

“Salvini had two windows of opportunity to go for a vote – either right after the EU elections or in early 2020. This August move was nonsense,” said Lorenzo Pregliasco, head of polling and political analysis firm YouTrend.

However, Borghi said the early 2020 option was no longer viable because Salvini had been boxed into a corner by a reform tabled by 5-Star to cut the number of lawmakers.

The change, which was due to be passed in parliament in September, would have led to a lengthy process of redrawing electoral boundaries and a referendum – effectively meaning parliament could not be dissolved for two years. Borghi said the alliance with 5-Star was breaking down and there were particular frustrations with Economy Minister Giovanni Tria. He is not affiliated to either ruling party but was keeping the League out of key policy decisions, Borghi said.