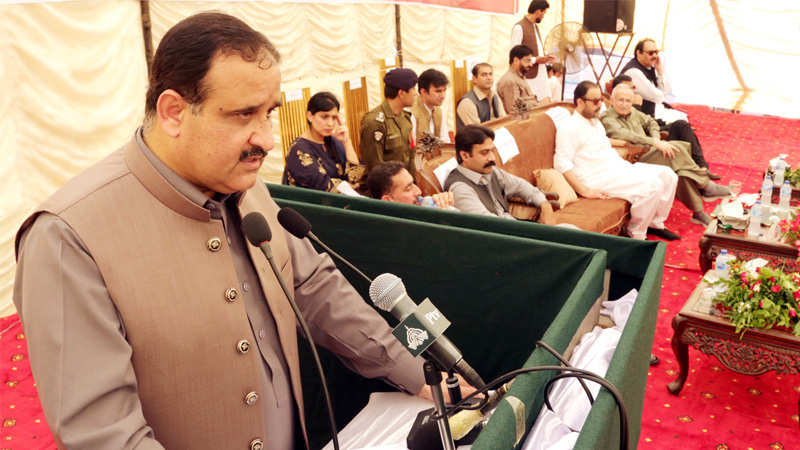 Around 1,236km long carpeted roads will be constructed in rural areas of the province with an amount of Rs 15 billion during the first phase of this programme. According to the project, the 8.3km road will be constructed from Sindhwan Tarrar to Bluno via Mogi.

The chief minister inaugurated various development schemes in Kolo Tarrar area of Hafizabad including Government Degree College for Women eastern side Hafizabad, emergency center rescue-1122 for Pindi Bhattian and Police Khidmat Markaz besides inauguration of tree plantation drive over an area of 58 kanal of state land retrieved from the land grabbers. As much as 794 kanal land has been got vacated from the squatters in Hafizabad district worth 1.64 billion rupees. He also planted a sapling under tree plantation campaign.

Addressing the ceremony at Kolo Tarrar, Usman Buzdar said that PTI government has devised a comprehensive strategy to develop the backward areas and added that Naya Pakistan Manzaleen Aasan project is being launched from Hafizabad district. He added that approximately 29km four roads’ construction projects will be completed with the cost of Rs 323.7 million. This project is being started from Sindhwan Tarrar from Tuesday, he added. He said that Naya Pakistan Manzaleen Aasan project will continue for five years to construct carpeted roads in the villages. The next phase will be started from January 2020 to be completed on December 31, he added.

The chief minister told that DHQ Hospital Hafizabad will be upgraded along with improving the condition of the roads as there is no difference between Hafizabad and DG Khan. The love and affection shown by the people of Hafizabad give the feeling that I have come to my native home, he added. I will, again, visit Hafizabad to solve the problems of the people and new development schemes will be started as well, he said. The girls’ college has been constructed with the cost of 12.66 crore rupees and Rescue-1122 centre and Police Khidmat Markaz are starting their services in Pindi Bhattian.

The chief minister informed that 794 kanal state land has been retrieved during anti-encroachment campaign in Hafizabad. Tree plantation is being conducted over 58 kanal land having the market value of one billion, 64 crore and 30 lakh rupees, he added. 50 crore saplings will be planted during the next five years in collaboration with the federal government. During the current year, a target of 90 lakh sapling has been fixed in monsoon season and the citizens should actively take part in it to make the country green and clean, concluded the chief minister.

The parliamentary secretary tourism Mamoon Jafar Tarrar said that political pygmies were gossiping about the change of Chief Minister Usman Buzdar but nothing is proved as truth. Chief Minister Usman Buzdar will complete five years stint and I want to tell them to wait for the next five years because Usman Buzdar will be the chief minister for that period, as well. Usman Buzdar has given various development schemes to Hafizabad and this would be extended in future, as well. Former so-called Khadim-e-Alla was used to of political gimmickry and a drama was staged to help the flood affectees by wearing long shoes. Flood affectees are not helped this way, he added. I know that Usman Buzdar, often, visits surprisingly in nights without any protocol to review problems of the people but it is not projected. Shaukat Bhatti MNA welcomed the chief minister to Hafizabad and said the people are standing with the prime minister and chief minister Punjab.