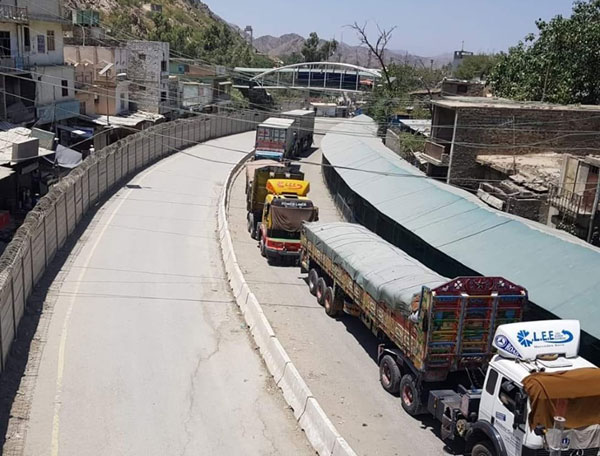 The Pak-Afghan border crossing point at Torkham in Khyber district remained open for trade and business activities around the clock from Monday night on a trial basis.

It is to be mentioned here that six months ago, Prime Minister Imran Khan asked the authorities concerned to adopt all possible measures to keep the Pak-Afghan border open 24/7 not only to facilitate the Afghan citizens but to boost trade activities.

The administration official in Torkham told on test base the officials of custom, Federal Intelligence Agency, forces and other departments would worked into shifts and for the purpose all necessary preparations had been finalised.

Last day flag meeting of Pak and Afghan was held in Torkham in which officials of both countries principally agreed to retain open Pak-Afghan, sharing border Torkham for 24 hours.

PM Imran Khan was expected in next week to formally inaugurate the 24/7 scheme of Torkham border.

On the first night of the plan 30 export loaded vehicles had been cleared while more than 150 import laden trucks and empty trailers crossed into Pakistan, clearance agent association official told.

As per the custom department, it deployed 54 extra staff to continue export import activities at the border at night time.

According to the administration official in Torkham additional police and other security agencies personnel had been deployed to resume security measures at the border.

The initiative was warmly received by the transport and business communities and said that on one hand it would enhance export, imports activities at the border at the same time it would avoid transporter waiting in long queues for clearance purpose and commodities especially perishable items would delivered on time.

President Khyber Chamber of Commerce and Industry, Col (r) Sadeeq appreciated the positive step of the government and said it would certainly enhance export two to three times, if the decision was materialised in spirit and letters.

In routine working timing of clearance process at Torkham border was 9:00 am to 4:00 pm as majority of officials of custom and other departments were non-locals therefore, they arrived late and left early, so they hardly got four hours for clearing merchandise export and import commodities.

The decision of Prime Minister Imran Khan to keep open the western border will be effective in way, if all required needs including provision of extra-staff of various departments with their working efficiency, functional at the border, internet, electricity etc, Sadeeq remarked.

While expressing his views, President Torkham Transport association Haji Azeemullah Shinwari thanked the PM and said with starting of night shift would avoid traffic mess in Torkham beside perishable goods would be delivered prior of its decaying.

He added that the truckers had to wait for days in customary clearing process due to slow process of clearing process that had halted export beside with additional miseries of the transporters.