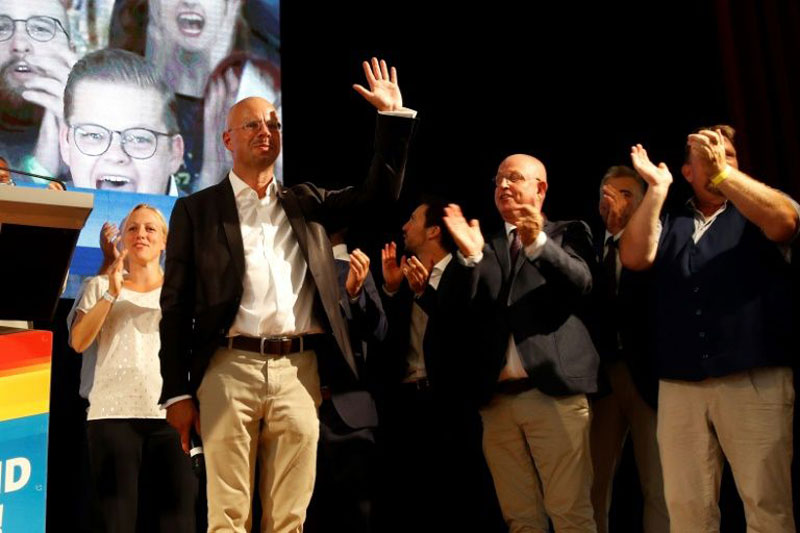 The latest electoral surge by Germany’s far-right AfD highlights the decline of the mainstream parties who scored narrow, last-gasp victories thanks mainly to a dwindling band of elderly voters.

The outcome of Sunday’s regional polls in the ex-communist states of Saxony and Brandenburg showed that especially voters in their 20s, 30s and 40s backed radical protest party the Alternative for Germany.

In a shock result, they propelled the nationalist, anti-immigration AfD to become the second-strongest party in both states.

Those who were young or not yet born when the Berlin Wall fell 30 years ago proved most receptive to the AfD’s appeal to lingering resentment in the eastern region that still lags the west in jobs and wealth but also services such as mobile phone coverage.

If the AfD narrowly missed out on outright victories, especially in Brandenburg, it was in large part thanks to the shrinking demographic of pensioners who stayed loyal to the big-tent parties.

Berlin daily Tagesspiegel wrote about the AfD that “it’s by no means the old white men who have helped the party cause an electoral earthquake in the east”.

The newspaper pointed out that, in Brandenburg state which surrounds the capital, the AfD did best among the 25 to 34-year-olds, citing an analysis by pollsters Infratest dimap.

“This poses very special questions for the future of democracy.”

As in many other democracies, Germany’s political landscape has fragmented into ever more smaller parties, making it harder to achieve stable governing coalitions.

The rise of the AfD, formed as a small eurosceptic force six years ago, has come in opposition to, and at the expense of, the CDU and SPD which for decades dominated post-war German politics, and which now rule the country in a fragile coalition.

The populist party has railed loudly against the “Merkel regime” but, more broadly, against institutions, parties and media outlets it regards as forming an elitist and remote establishment.

Sunday night showed how much has changed in Germany, where collective shame over the country’s war-time past had long helped consign openly xenophobic forces to the sidelines of politics.

Even though the AfD, which has known right-wing extremists in its ranks, won between one fifth and one quarter of votes, the CDU and SPD breathed an audible sign of relief for having scraped to wafer-thin victories.

Despite the CDU’s heavy losses in the state it has ruled ever since Germany’s 1990 reunification, Saxony state premier Michael Kretschmer insisted that “the friendly face of Saxony has triumphed”.

Voter data showed whom he had to thank for dodging the bullet of electoral defeat: the CDU scored 38 percent among voters in their 60s, and 45 percent among those over 70 — by far their best results.

If the trend continues, it raises troubling questions for the big parties in a fast greying country — and threatens to further shake up what was long Germany’s consensus-driven, slightly dull political culture.

The outcome Sunday “is a stark reminder that Germany’s ‘people parties’ have essentially turned into old people’s parties in large parts of Germany,” said Michael Broening of think-tank the Friedrich-Ebert Foundation.

“For political movements trying to look ahead, this poses a tremendous challenge.”

Top-selling daily Bild voiced concern that one third of Eastern voters supported either the AfD or the far-left Die Linke, both parties which were unable or unwilling “to distance themselves from the 20th century’s tyrannical regimes”.

“The AfD may be led by deplorable right-wing extremists, but it is also a party that attracts the vote of the frustrated, the angry, the disappointed -– just like Die Linke,” the newspaper argued.

“So once again the warning to the (once) mainstream parties is that you ignore people’s concerns at your peril.”

In future, the AfD may not stay primarily an eastern German phenomenon, warned Juergen Falter of Mainz University.

“If the economic situation worsens and unemployment rises,” he said, “then the AfD could benefit from it as much throughout the country as it does in Saxony and Brandenburg.”