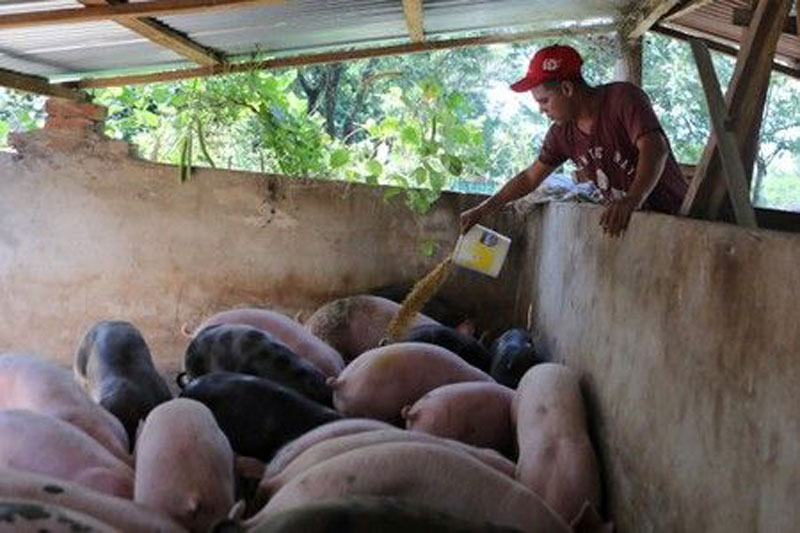 Ricardo Bolanos lays out a camouflage vest, a small battery radio and old rubber boots on his bed, cherished relics from his 45 years as a FARC guerrilla fighter.

Bolanos, 64, who lives at the Pondores reintegration camp in the arid La Guajira region of northeast Colombia, committed to a peace process with the government that he hopes will bring a different life.

The guerrillas agreed to disarm in return for promises of reintegration into society, economic benefits for former fighters, political representation in Congress, and guarantees of their safety.

But Bolanos, like many other ex-rebels, is worried about whether right-wing President Ivan Duque, who took office last year, is committed to helping former fighters achieve reintegration.

Duque’s right-wing government has opposed many aspects of the peace deal and has unsuccessfully tried to make amendments via Congress, requesting tougher punishments for ex-rebels who committed war crimes.

Another source of fear is the killings of dozens of ex-FARC fighters around Colombia – some just outside the camps where ex-rebels live.

“We’re worried about our personal security,” Bolanos says, from his cramped and overheated living space. “You start to lose confidence in the credibility of the peace process.”

Some 13,018 ex-guerrillas are in the reincorporation process. Around a quarter of those live in 24 reintegration camps, while two-thirds live outside them, according to think tank Ideas para la Paz. The whereabouts of the remaining 8% are unknown.

The United Nations says 137 ex-combatants have been killed since the deal was signed, leaving many scared of life outside the camps. The United Nations was unable to say who was responsible for these killings and impunity rates are high.

The killing of human rights activists has also spiked, though sources disagree on numbers. Estimates range from government figures of 289 killings to think tank Indepaz, which pegs them at 738.

“We’re worried about lives as people in the reincorporation process are being murdered and so are hundreds of social leaders,” Marcos Calarca, a FARC spokesperson and member of Congress, told Reuters at the Pondores camp.

Threatening flyers have made their way to some ex-guerrillas. Reuters was shown one supposedly from the ‘Black Eagles’ paramilitary group.

“Colombia cannot be a cradle for guerrillas disguised as supposed leaders and we’ve begun the fight to exterminate them throughout Colombia,” one flyer stated.

In June, Duque announced 23 new measures to ensure their security, including closer work with the ombudsman to spot risks sooner, less waiting time for personal security assignation and self defense training.

But killings have continued.

According to the Washington Office on Latin America (WOLA), a think tank, the murders showcase the lack of capability and willingness the Duque government has to implement the accord, weakening the prospect of peace and jeopardizing the prospect of any future peace talks with remaining guerrilla groups.

“Killings of former combatants could be a direct threat to the foundation of any peace accord,” said WOLA director Geoff Thale. “If this trend continues, it could push more demobilized ex-combatants into the growing FARC dissidence.”

The dissident movement is a growing concern.

A group of former rebels announced a new offensive in late August, saying in a YouTube video that the peace process was not being properly implemented.

The announcement drew condemnation from the government, the United Nations and the FARC political party, whose leadership said the majority of ex-rebels remain committed despite “difficulties and dangers”.

Some 2,300 people were classed as FARC dissidents in the most recent official count by military intelligence in May. Many are thought to be based in Venezuela, where President Nicolas Maduro has said former rebel commanders are welcome.

UN figures show just 10% of ex-guerrillas have been granted credit for farming and development projects meant to provide jobs for them in civilian life. The projects were meant to ensure former fighters did not return to cultivating coca, the raw material for cocaine.

The government says it will extend a monthly $200 stipend to ex-combatants until Dec. 31, as they did not meet a August 15 cut-off date to hand over the loans.

So far, the government has paid almost $65 million in stipends, and the extension will cost them another $12.7 million.

The government also announced a $4.6 million investment to purchase land for the FARC for economic projects.

“We encourage the government to do it at the fastest pace possible,” says Carlos Massieu, head of Colombia’s UN Verification Mission, which monitors the reintegration of ex-combatants.

As the former rebels struggle to get projects off the ground, Duque has come under fire for the delays from FARC leadership, lawmakers and human rights groups.