Some storm-savvy Floridians shrug, others flee or bunker down 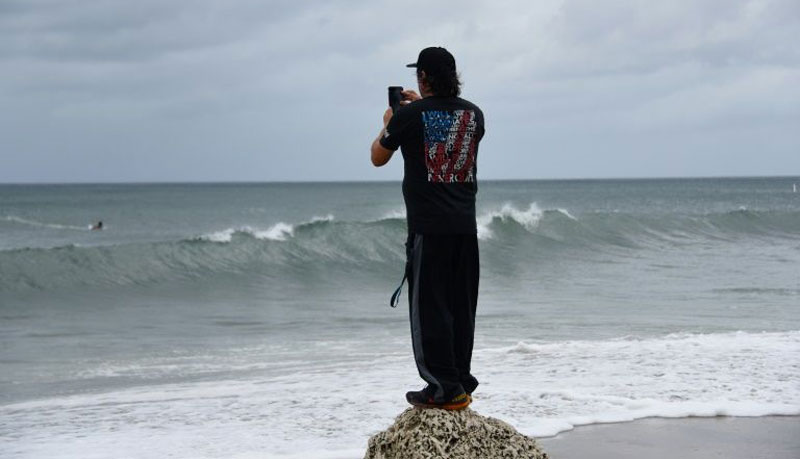 Michael James was boarding over the last two windows of his house on Florida’s east coast. The first gusty blasts of wind were announcing Hurricane Dorian’s imminent arrival, and most residents had fled. But James, an old hand at this, knew he had a few hours to go before leaving.

“Guess what?” he said. “A real hurricane is a lot different than what people see on TV — it’s much worse.”

James, who is 63, has not forgotten the two times he was caught in hurricanes while working on oil rigs in the Gulf of Mexico in the 1980s.

Monster storm Dorian was downgraded Monday to a still-powerful Category 4 as it lumbers slowly across the Bahamas toward the Florida coast.

Residents there — those who haven’t already evacuated — have been keeping a nervous eye on the news, hoping the storm will make the promised northward turn before rumbling into the mainland.

Residents of Port Saint Lucie, a medium-sized city midway up the state’s Atlantic coast, is expected to have its closest encounter with the massive storm late Tuesday or early Wednesday.

People here know what they must do. Many area businesses are already closed and boarded up, and shelters have begun to fill up as the skies take on a more ominous cast.

Mobile home neighborhoods along the Indian River are now nearly deserted, the fragile vinyl and aluminum structures protected in cursory fashion. But many long-time Floridians are keeping their humor, saying they know from experience what to expect.

Any tips for a hurricane first-timer?

Stacey Ewers, who has spent 35 of her 56 years in Florida, breaks into a smile.

“Just enjoy the experience,” she says, taking a break from boarding up her windows with leftover wood — her supply of plywood long since exhausted.

Residents of those islands are under mandatory evacuation orders, and police are preparing to close the bridges that provide access to and from the mainland.

A few people have waited until the last minute before leaving, hoping for a final dramatic view of the ragged and rising sea before communications are cut off.

The waves coming in are wild and thunderous, powerful reminders of the force of the looming hurricane that spent much of Sunday and Monday parked over the Bahamas with devastating effect.

Mist blotted out the horizon, rain whipped through the area intermittently, and wind-blown sand swirled, danced and pelted the rare onlookers.

At least one of them loved the scene.

“It’s beautiful,” said Jed Guty, a Colombian national who refused to give his age except to say he is “very old.”