As UN body wraps up in Guatemala, fears for anti-graft fight 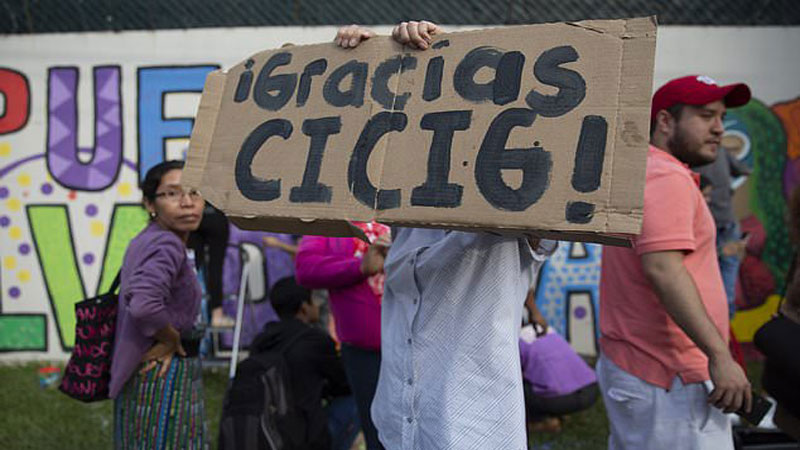 For over a decade, the work of the International Commission against Impunity in Guatemala brought the Central American nation hope that corruption could be fought. Now, as the end of its mandate nears, many fear a setback in the fight against impunity.

The UN commission known as Cicig for its initials in Spanish, which brought to trial three ex-presidents and hundreds of businesspeople, officials, judges and civilians accused of corruption, will shut down Sept. 3 after the government of President Jimmy Morales decided not to renew its mandate.

Guatemalans fear the end of its work may abandon legal cases in process, weaken the anti-immunity prosecutor’s office that investigated hand-in-hand with Cicig and result in those accused seeking revenge.

Miguel Ángel Gálvez, the judge who tried and imprisoned former President Otto Pérez Molina in 2015, is aware of that fear.

“I believe we have already taken a big step back” with Cicig’s exit from the country, Gálvez told The Associated Press. “Without prosecutors who know the cases, what is going to happen?”

He warned that in the investigations “where sentencing is already being passed it has happened like this, the cases are crumbling.”

A sign of that fear is the recent absolution of the son and brother of President Morales, accused of embezzlement and money laundering for purportedly falsifying invoices and faking a bidding to get their hands on government funds. Although the son confessed, he was acquitted.

Morales has less than five months left in office and his successor, President-elect Alejandro Giammattei, has not shown interest in asking the United Nations to intervene again, although he announced the creation of a Commission against Corruption with financial support from the United States.

The co-optation of the judiciary by the executive, according to analysts, can be seen in the decisions of the judges of an appellate court that has been questioned over its rulings in favor of people accused of corruption.

The court reversed a separate tribunal’s convictions of businesspeople and officials accused in one of the most important cases investigated by Cicig and prosecutors: irregularities in the purchase of medicine for the social security system. The same court also protected the late Guatemala City Mayor Álvaro Arzú from being investigated for alleged corruption.

One judge on that court, Beyla Estrada, is married to Morales’ spokesman.

But the biggest case investigated by Cicig and prosecutors, known as “The Line,” which landed Pérez Molina, then-Vice President Roxana Baldetti and nearly the entire Cabinet behind bars over customs fraud, still has not been tried and the fear is it could be suspended due to a lack of backing from the UN commission.

And although chief prosecutor Consuelo Porras has offered to bolster the anti-impunity branch, few have faith in her words. Porras decided not to hire any Guatemalan who has worked with Cicig, depriving the agency of their deep knowledge of the cases.

Porras was picked for the position of top prosecutor by Morales.

Attacks against anti-impunity prosecutors are another fear of activists.

Eleonora Muralles, an activist the group Pro-Justice Movement, said there is fear that the accused will seek revenge.

“We saw all that was invested in the effort to annul this commission and to annul cases. It creates a certain fear that they could try to repress activists, operators of justice and journalists with the intention of reversing everything,” Muralles said.

The tension between Cicig and Morales began in January 2017 following the accusations against his son and brother, and worsened shortly after midway through that year when the commission sought to have Morales’ immunity of office lifted to investigate him for alleged illicit electoral financing. But Congress protected him, and the president avoided investigation.

Morales decided then not to renew Cicig’s mandate, alleging that it had overreached in its actions, and declared Colombian lawyer Iván Velásquez, the commission’s chief, persona non grata. He also denied visas and work permits to international employees of Cicig and withdrew government personnel and other support. He tried unsuccessfully to unilaterally bring an end to Cicig’s mandate in January 2019, but a ruling by the Constitutional Court allowed Cicig to continue operating.

Velásquez had a different fate, as Morales finally blocked his entry into the country.

During its tenure Cicig has broken up 70 criminal networks and resulted in prosecution of 670 people, of whom 70% have a substitute prison measure. Some 400 sentences have been handed down, there were around 100 requests to lift immunity of public officials and 30 legal initiatives were promoted.

In the financial area, at least $60 million in compensation was obtained and another $100 million are in process of seizure from just two of the commission’s 120 cases.

Polling this year by the company Pro Datos showed over two-thirds of Guatemalans backed Cicig’s performance and a similar percentage were critical of Morales.

For former chief prosecutor Claudia Paz y Paz, Cicig “lifted the veil on the workings of an entire system that has the state co-opted. … The major legacy of Cicig is consciousness of how those networks function, how stagnation, poverty, exclusion and violence are not accidental in the country.”

But Max Quirín, a businessman who was convicted of corruption and then absolved by the appeals court, sees Cicig differently.

In a public letter he said that “it is also appropriate to remember the great number of abuses that it committed, the transgressions against the legal framework that they violated and the perverse actions that they led for political and personal ends.”

In 2007 the government signed the agreement which was later ratified by Congress for the installation of Cicig in the country, and it was renewed by three governments.