Pakistan will not trigger war with India: Imran

* PM says Kashmir issue can be resolved through dialogue as war has never been a solution to disputes
* Announces to give multiple-entry visas, visa-on-arrival to Sikh pilgrims 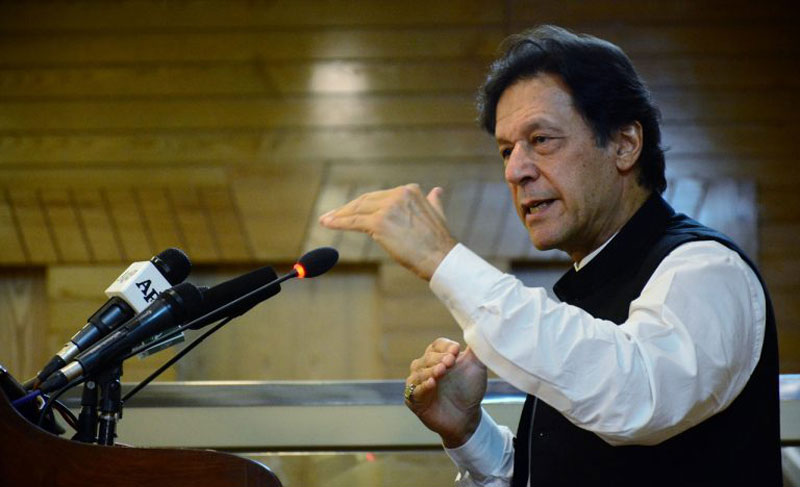 As tensions soared after New Delhi revoked the special status of Indian-held Kashmir on August 5, Prime Minister Imran Khan on Monday reiterated that Pakistan will never trigger a war with India.

“We both are nuclear-armed countries. If we had any military confrontation, the world can be in danger,” Imran Khan said, addressing members of the Sikh community in Lahore. “However, Pakistan will never trigger a war,” he told the International Sikh Convention here at the Governor’s House.

The prime minister said after assuming the prime minister’s office, he tried to establish good ties with India, which unfortunately set preconditions instead of engaging in dialogue. He said the region is sitting on a ticking bomb of climate change as the glaciers are melting which can have dangerous repercussions for the future generations, and called for joint efforts to counter the challenge.

Imran Khan said the Kashmir issue can be resolved through dialogue as war has never been a solution to disputes. The Bharatiya Janata Party (BJP) government, he said, is pursuing the very ideology that the Hindus are superior to other communities, which had led to the creation of Pakistan. He said no religion preaches oppression of minorities rather all the prophets taught humanity, compassion and justice to establish a difference between a civilized society and the wild life. Drawing the audience’s attention towards ongoing human rights violations in the occupied valley, the prime minister said Kashmir has been under curfew for last 27 days, which is deplorable and unacceptable. He said the ideology of Rashtriya Swayamsevak Sangh (RSS) is a threat to India, which believes in the dominance of Hindus in the country thus targeting all the minorities there. This ideology is a threat for the Indian people, he said, adding that Pakistan is building pressure to do away with this ideology, and also urged the Sikhs to raise their voice against it.

The prime minister announced that his government will issue multiple and on-arrival visas to the Sikh community and provide them maximum possible facilities during pilgrimage to their holy sites. “I assure that you will be issued multiple-entry visas… This is our responsibility. We will facilitate you rather will give you visa at airport. (We) will give you multiple-entry visas to facilitate your journey to and from India,” he said.

The prime minister said after coming into power, his government realised the difficulties faced by the foreigners to get Pakistani visa intending to visit the country for pilgrimage or tourism. “Though our government has changed the visa regime, the mindset of creating hurdles will gradually diminish,” he added.

The prime minister said the government will facilitate the Sikh pilgrims and ease out all the processes for them, besides uplifting their shrines in different cities. He said the 550th birth anniversary of Baba Guru Naka will be celebrated with full zeal along with the Sikh community. The moot was attended by Punjab Governor Chaudhry Sarwar, federal and provincial cabinet members, and Sikh pilgrims from the United Kingdom, the United States, Canada, Europe and other countries. Later, Prime Minister Imran Khan and Chief Minister Usman Buzdar discussed the overall situation of the province. The discussion focused on the progress of socio-economic projects in Punjab province. Prime Minister Imran Khan also chaired a high-level meeting on the provision of healthcare facilities to the people of Punjab.