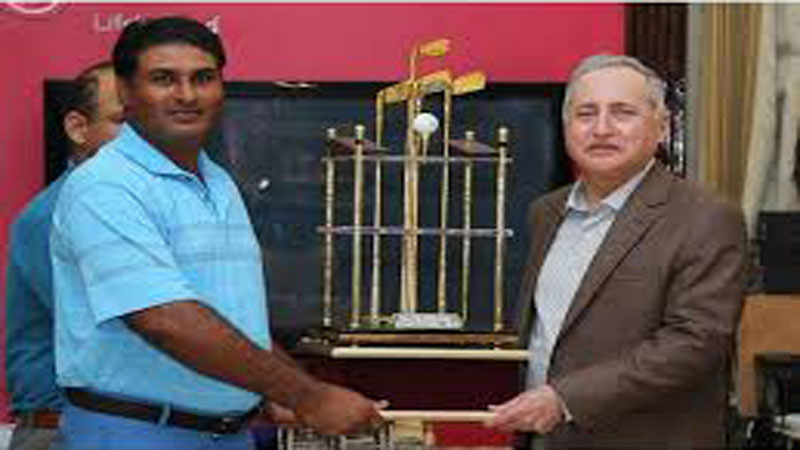 Dark storm clouds loomed on the horizon as the seasoned Matloob Ahmed took out his sand iron for what was easily one of the most important chips of his career. Standing downhill and around 15 feet from the green of the 18th hole, Matloob knew that he just needed a par to win his second UMA-CNS Open title in four years. It was the second playoff hole and his opponent Muhammad Tariq was caught in a seemingly impossible position where he needed a chip-in from 30 yards for a par. As a big gallery watched in anticipation, Matloob chipped with a deft touch and the ball rolled towards the hole only to stop agonisingly close. But Matloob knew that it was good enough. So did Tariq, who went for it but his chip sailed past the flag. There was this cloud burst as soon as Tariq chipped as a completely drenched Matloob celebrated his title-winning triumph here at the Karachi Golf Club.

“It’s a great feeling to once again win this prestigious championship,” said Lahore’s Matloob, who had won the coveted title twice previously in 2001 and 2016. The four-day championship concluded with a perfect climax as Tariq forced a playoff with an impressive final round of three-under 69 for an aggregate of 276 (-12). Matloob, who had started the day with a one-shot lead, adopted a cautious approach as he occasionally took calculated risks on his way to 71. It was in complete contrast to his heroics in the penultimate round on Saturday when he broke the course record with a stunning 62. Though he featured in the playoff alongside the pint-sized Tariq, Matloob”s main rival for the title during the best part of the round was Hamza Amin.

In fact, Hamza was enjoying a two-shot lead against Matloob at the turn but squandered the advantage on the back nine. His inability to hole the ball from close range once again turned out to be Hamza’s Achilles heals. He missed several small putts and the one he missed on the 17th hole from less than two feet threw him out of contention. Hamza missed another birdie chance from four feet on the last hole to finish at 278 (-10), two shots behind the top duo.