Japan’s veteran maulers happy to die in their boots 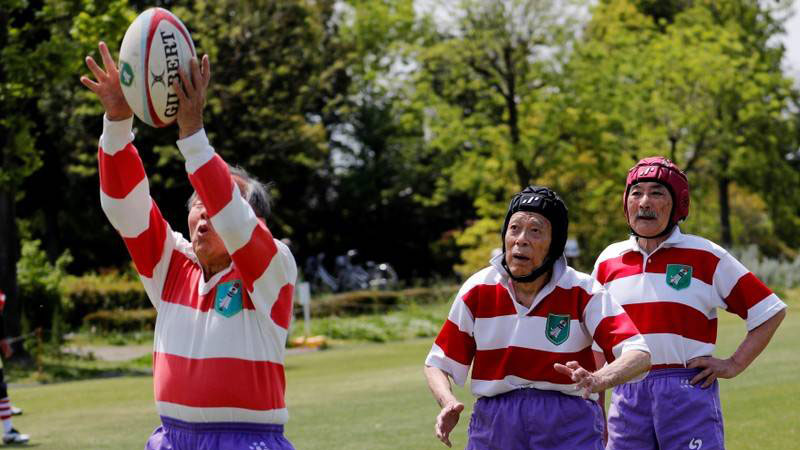 Japan may have been seen as a leftfield choice to host the Rugby World Cup but if you want a sense of the country’s long love affair with the game, you could do worse than to get along to Tokyo’s Fuwaku club. The dozens of players running, passing, mauling, scrummaging and crashing into one another in the shadow of the Aquatics Center being built for the 2020 Olympics are unremarkable in all but one thing – their age. Fuwaku, founded in 1948, is one of approximately 150 Japanese clubs that stage competitive, full-contact matches for players over the age of 40 and the oldest man on the park is sprightly 86-year-old lock Ryuichi Nagayama.

As in rugby clubs around the world, the attraction is only partly the love of playing the game which originated in an English private school and can look to the uninitiated like legalized brutality. “You tackle and battle each other, but the gathering after the play is so enjoyable and fun,” said Nagayama, who is the oldest active player but junior to three club members in their 90s. “We talk about how each other plays and no one gets angry about how we played. The atmosphere is great.

“In short, there is nothing but rugby (for me).” As a doctor, Nagayama is well aware of the risks involved in playing a high impact sport at his age and the club’s website gives detailed advice on health precautions and even links to a life insurance company. “Since I joined Fuwaku Club, I have broken ribs many times and broke my collarbone too,” Nagayama, who is still practices medicine, said with a dismissive shrug. “There are many other things too. When I noticed an irregular pulse, I would take medicine to adjust. So, I can still do it. I can’t stand not playing. That’s it. “This may sound strange, but I have lost my wife years ago and now I would say I don’t mind dying playing rugby.”

10,000 veterans: The World Cup, which starts next month, will certainly boost awareness of the game in Japan and, organizers hope, bring through a whole generation of young rugby players. The country, though, has long been in the top 10 in the world for the number of rugby players with more than 120,000 at the last World Rugby census. Fuwaku’s General Manager Mitsuaki Okajima estimates there are around 10,000 veteran rugby players currently playing at clubs across Japan and his club alone has 300 players competing across all age categories. In a country where there is much concern over the loneliness of the elderly, rugby not only keeps the players active but also offers a ready-made social life.

Among them is 71-year-old Englishman Tony Hartley, who is not alone as a foreigner who has found rugby to be a way to negotiate the sometimes tricky path toward building friendships with locals. “I was at the Tokyo Sevens and I got chatting to a guy next to me because he had a shirt on that said ‘Fuwaku Rugby Club since 1948’, which is when I was born, so I was curious,” Hartley explained. “He said he could introduce me to the club, which he did the following week and I have been playing more or less ever since. That was seven years ago. “I was really surprised because the scene doesn’t really exist in the UK, certainly not at 60, 70. It was a really welcome surprise and a good way of making friends.”

At 54, Norihasa Yamada not only plays but officiates with a vibrant authority he says is modeled on Welsh referee Nigel Owens, who will take charge of the World Cup opener between Japan and Russia on Sept. 20. Owens and English referee Wayne Barnes recently visited Fuwaku and Yamada took them for a Japanese barbecue lunch after training.

“It was so much fun and an honor to meet them,” said Yamada, showing off a photograph of Owens at the lunch on his phone. “We spoke all about rugby, which is my favorite thing.”