An uneasy peace for ex-Colombia rebels after call to arms 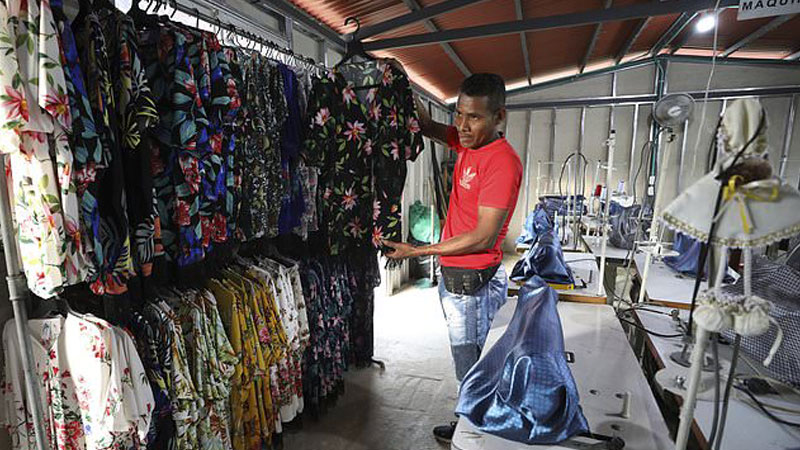 Off a dirt road deep in the Colombian mountains, a new town is coming to life where former rebel combatants grow corn, make Hawaiian-style shirts and even sell their own craft beer.

Yet signs of their struggle to reintegrate into civilian life abound.

Perhaps most glaringly, utility poles installed by the government many months ago still aren’t connected to the power grid, leaving them entirely reliant on a gas generator. The lifeless wires hang above their tin roof homes, a stark reminder that they remain disconnected from the world they are trying to join.

“We’re like nomads here. We don’t have anything,” said Ruben Dario Jaramillo, a former guerrilla for the Revolutionary Armed Forces of Colombia who is running an artisanal beer company, which he and a handful of comrades call “The Red.”

It’s former fighters like these that a small cadre of commanders with Colombia’s once largest rebel army are urging to rearm, accusing the government of falling short in implementing the 2016 peace accord ending Latin America’s longest-running conflict.

For now, several former rebels living at the Antonio Nariño demobilization camp about four hours from Colombia’s capital say they are committed to the peace deal. But at least one said he couldn’t promise that he would never return to the battlefield if things start to turn sour.

“I can’t say yes or no,” said Gonzalo Beltran, 43, who leads a group of ex-combatants making floral-print shirts in bright colors sold for $10 each. “If there is an attack against us, we’d have to pursue an alternative. We can’t stay with our arms crossed.”

Colombia’s fragile peace process took a precarious turn Thursday when Luciano Marin, once a chief proponent of the accord, announced that he and a band of rebel FARC hardliners were rearming for a “new phase” of the conflict.

In a 32-minute video posted on YouTube, Marin denounced Colombia’s leaders for failing to fully implement the accord and accused President Ivan Duque of standing by as hundreds of former combatants and leftist activists have been murdered.

“The state hasn’t fulfilled its most important obligation, which is to guarantee the life of its citizens,” Marin said, dressed in an olive-green uniform and surrounded by about 20 heavily armed, stone-faced insurgents.

The rebels followed up their declaration with a letter Saturday calling on ex-guerrillas now living in 24 demobilization camps around the country to “continue the fight from wherever they are and in whatever way their situation allows.”

“There is no other alternative,” the insurgents wrote.

At the camp, named after a Colombian independence ideologue, former guerrillas said they respected the position taken by the ex-leaders, even while vowing to continue the peace process themselves.

“It’s an individual choice,” said Viviana Nariño, 40, who joined the FARC guerrillas at age 14 and is now head of a women’s association. “Everyone will have to respond for themselves.”

But she believes few, if any, are likely to heed the call, hesitant to return to a life of dodging bombs and bullets.

The camp sits about an hour’s drive from the city of Icononzo, where many people still have traumatic memories of the five-decade conflict involving leftist guerrillas, right-wing paramilitaries and the state.

After the accord was signed in 2016, a little over 300 rebels were transported to the rural demobilization zone here in one of Colombia’s coffee-growing regions to begin new lives as civilians.

People in Icononzo greeted the rebels with hesitation. Many were wary of having guerrillas accused of kidnappings and terror attacks so close. But the reality has been more of a quiet coexistence.

Today a supermarket off the town plaza proudly advertises that it sells “La Roja” beer. Few townspeople are aware of who among them was once a rebel. Many have never been to the camp.

“They’re workers now just like anyone else,” said Norma Yara, 59, who was displaced by another illegal armed group years ago.

She vividly remembers the days when bombings throughout Colombia were common.

“Many died who had nothing to do with it,” she said. “I’m afraid it will happen again.”

Colombia’s government says most of the nearly 13,200 former FARC combatants are firmly on the path toward reintegration. It says a recent poll of over 10,000 ex-rebels said 77% percent are optimistic about their future.

Only a quarter of the former fighters remain in the demobilization zones, many having left to reunite with relatives or look for work. Less than 10% are unaccounted for, though analysts say that is not necessarily an indication that they have joined the dissidents.

Despite his criticism of the peace accord, Duque’s administration has steadily increased the number of economic development projects involving ex-rebels. The government now supports about 30 initiatives involving roughly 2,000 individuals.

Still, the administration has been slow to implement provisions of the peace accord or not put some into motion at all, particularly those promising better infrastructure and resources for poor, rural communities long neglected by the state.