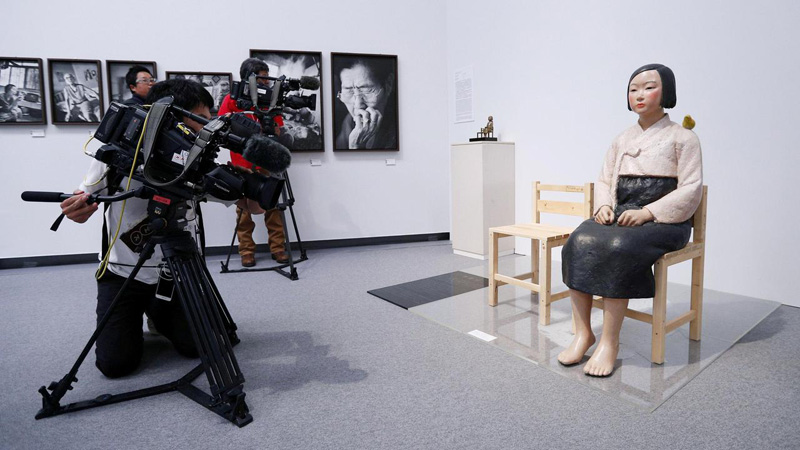 Organisers of a Japanese art exhibition who withdrew a statue symbolising “comfort women” defended their decision on Monday (Sep 2) as justified given a crisis in ties between Japan and South Korea and arson threats, but opponents decried it as censorship.

The term comfort women is a Japanese euphemism for women, many of them Korean, who were forced to work in Japan’s World War II brothels.

The issue of the women is highly emotive for people in both countries, whose relations remains overshadowed by Japan’s 1910-1945 colonisation of the Korean peninsula.

Japan says the issue was settled by past agreements and apologies, most recently a 2015 deal under which Japan apologised and gave 1 billion yen (US$9.4 million) to a fund to help the surviving women.

But many Koreans say Japan did not go far enough and South Korea disbanded the fund last year, saying it was flawed.

The artwork – Statue Of A Girl Of Peace, by South Korean sculptors Kim Seo-kyung and Kim Eun-sung – attracted a flood of complaints within days of the Aug 1 opening of the Aichi Triennale art festival in central Japan, and it was pulled after a number of “terror threats” by phone and by email, the governor of Aichi prefecture said.

The exhibition’s artistic director, Daisuke Tsuda, told a news conference in Tokyo organisers had been surprised by a recent sharp slump in relations between the neighbours. The origin of their latest dispute was again rooted in their shared history, but the ill-will spilled into trade and eventually into security when South Korea scrapped an intelligence sharing pact.

“One thing was the rapid deterioration in relations,” Tsuda said, in explaining the decision to withdraw the piece of art from the exhibition.

Of particular concern, Tsuda said, was that some threats referred to an arson attack on an animation company in July in the city of Kyoto in which 35 people were killed.

“The fact that many of the threatening phone calls and faxes were referring to this incident, it was so realistic and led to great psychological stress on staff members,” he said.

“It was something we hadn’t predicted.”

At a separate news conference, though, Yuka Okamoto, who organised the display of the statue, said the decision amounted to censorship and restriction of free speech.

“In regards to Statue Of A Girl Of Peace, which became a target of the attacks, this is a work of art hoping for a world without any war or sexual violence, as well as for a recovery of women’s rights and dignity,” she said.

The statue has been bought by a Spanish businessman who intends to exhibit it at a “freedom museum” he plans to open in Barcelona next year.