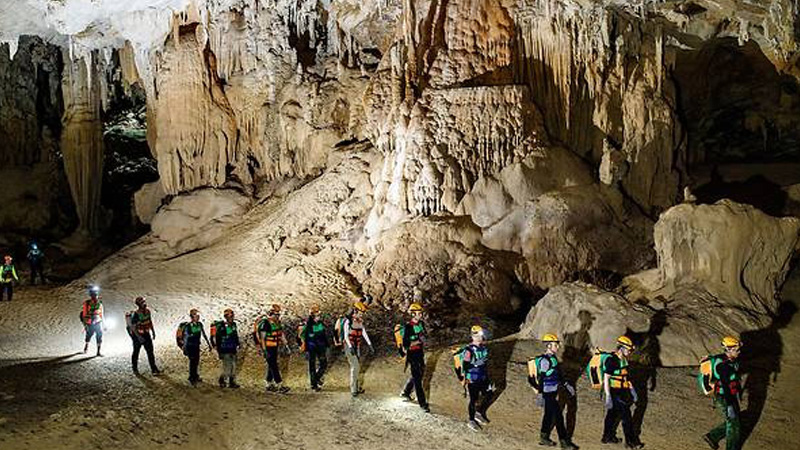 I have a phobia of getting trapped in dark, enclosed places. My friends said bats would poop on me. The excuses kept coming when I was invited to go on an adventure trek in Tu Lan in central Vietnam, a series of over 10 caves nestled within picturesque limestone mountains and wild jungles.

But I also believe in trying everything in life once so before I knew it, there I was, kitted out in hiking gear, gaping in wonder – and a little trepidation – at the dramatic expanse of verdant green mountains as our band of 13 intrepid explorers set out to conquer the Tu Lan caves.

Originally discovered in 1992, this cave system became globally famous when a photograph of one of the cave’s impressive stalactites and stalagmites, rising up from and reaching down towards iridescent green pools of water, won National Geographic’s 2011 Photograph of the Year. However, to experience this wonder of nature in person, we would first have to survive a gruelling hike over a mountain.

Organised by Montblanc in conjunction with its latest campaign for its 1858 collection, which includes a khaki-green vintage-inspired Geosphere watch, to encourage people to escape the concrete jungle to reconnect with nature, the remote Tu Lan caves were chosen to get us as far away from civilisation as possible. This meant camping overnight the middle of a dense jungle, away from all creature comforts, including Wifi and flushing toilets. 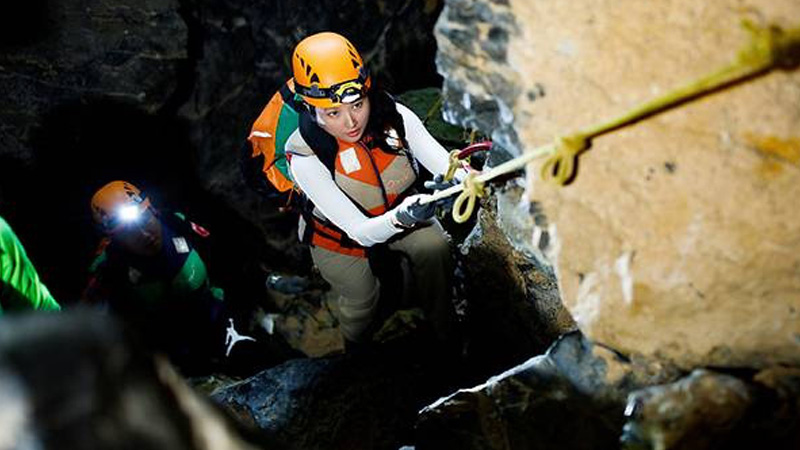 At this point, it is hard to say whether the thought of being completely unplugged or the impending physical challenges of the trip are more daunting. Either way, we begin our scrappy, breathless scramble through the dense jungle undergrowth. We clamber over slippery boulders, traverse rock crevices on narrow stepladders, scale rock walls and march along at a lung-busting pace.

Three-and-a-half hours and 7km later, we finally arrive at our camp, located in the valley where the entrance to a few of the caves are located. We strap on our helmets and life vests and and enter the first, called Ken cave, where the National Geographic photograph was taken.

Underground rivers run through the caves, which means we have to swim to get to the inner chambers. Because the rivers channel the rain water out, the caves are only accessible during certain times of the year when the water level is low and the current mild. For safety reason, only certified guides with extensive knowledge of the local terrain are permitted to conduct trips and all tours are run by local operator Oxalis Adventure.

After the exhausting hike, it is almost relaxing to be gently paddling in the cool water. As we swim, bats which have been disturbed by our headlights and clumsy splashing flutter around restlessly, wings flapping rapidly. At least there’s no bat guano dropping on my head, I think, relieved.

Deep inside the cave, our guide instructs us to turn off all our headlamps, then switches off the 10,000 lumen lamps used to illuminate the cavern. Utter darkness engulfs us. As our eyes adjust, we start noticing the light rays from the faraway entrance, reflecting on the water’s surface and bouncing off the walls. It is a delicately choreographed ballet more impressive than any man-made mega light show.

“Someone should put this on Instagram Stories,” somebody remarked, breaking the awed silence. We laugh but nobody bothers to pull out a camera – we are all too busy soaking in the moment.

Back at our campsite, there are no showers – but there is something even better. A natural waterfall where we can cool off in and soak the day’s weariness away.

Before long, we are drawn to our dining tent by the irresistible aroma of hearty, home-cooked food, prepared by the team of porters. There is barbecue chicken with its skin charred to smokey perfection, Vietnamese beef stew, homemade potato chips and the local rice wine to wash it down with. Since all our mobile phones are rendered useless for the evening, we rely on the almost-forgotten art of making conversation to pass the time. As we dine, we joke and recount the day’s experiences. 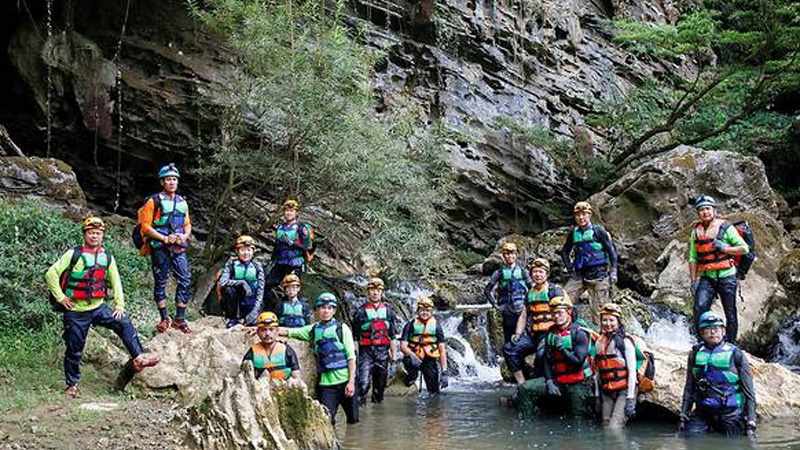 The next morning, we get ready to re-enter the caves. Today, we will swim through two of them that tunnel through the mountain we hiked over the day before to get out of the jungle. By now, we all know the drill as we lower ourselves carefully into the water, mindful of the sharp rocks beneath the surface.

Now that we are accustomed to this environment, there is time to enjoy the surreal beauty of being underground. We admire the oddly shaped limestone rock formations, enjoy the clear water that gets progressively cooler the deeper in we swim, and even sing silly songs that magically sound good thanks to the wonderful acoustics of the caves.

Then, before we know it, we have wound our way back out to the other side and we are once again, back in civilisation. Predictably and almost comically, everyone (myself included) whips out their cellphones to check emails and WhatsApp. Thankfully, the world has not ended.

I think back to the night before, when I lay tossing and turning in my tent, unable to sleep because of the heat, bugs and other miscellaneous discomforts. Finally, I gave up, sitting up to peer out of my tent. In the wilderness, the moonlight was bright enough to illuminate the campsite. I sat in silence, taking in the view, listening to the gentle gushing of the waterfall and rustling of the leaves as I sank into a meditative mood. I may have been far from all that I was familiar with, but in the process, I had reconnected with the natural world in all its wonder.