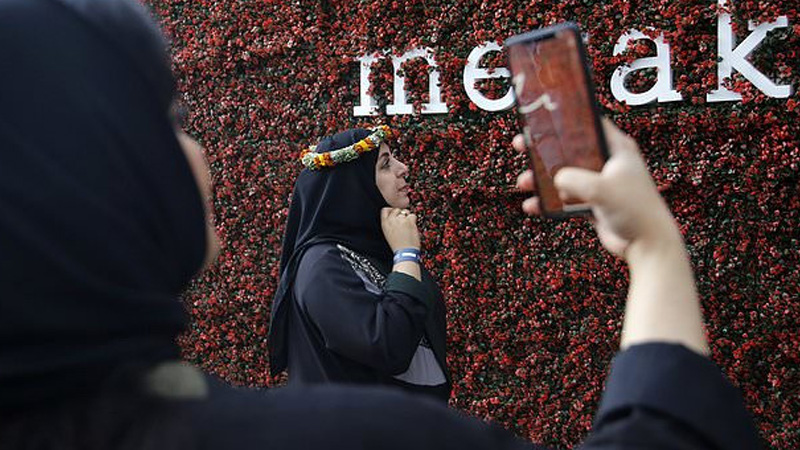 Atop a string of green mountains in Saudi Arabia, a monthlong festival drew a medley of yoga enthusiasts, extreme adventure seekers, tourists and traditional Saudi families – many wearing colorful flower crowns native to the region as the kingdom looks for ways to revamp its image and build up tourism.

Scenes of women zip lining and young Saudis at concerts, while nevertheless in a remote village, are a stark departure from the ultraconservative policies that for decades barred concerts and gender mixing, as well as shunned women’s sports in the kingdom.

The reforms are being pushed by Crown Prince Mohammed bin Salman, the king’s powerful 34-year-old son. He is looking to revamp the country’s economy to become more resilient in the face of lower oil prices. Boosting domestic spending and opening the country to foreign tourists are seen as ways to create more jobs for the millions of young Saudis who will be entering the workforce and looking for jobs in the coming years.

The al-Soudah festival attracted between 12,000 and 15,000 visitors per day, said Husameddin al-Madani, who oversaw the event. Most visitors to the festival were Saudi citizens, but it also drew foreign tourists.

Unlike Saudi Arabia’s major cities – which have limited outdoor spaces for sports, especially for women who must wear long flowing robes known as abayas in public – Saudi women in al-Soudah wore fitted jeans and sneakers under their rolled up abayas to hike up the mountain. Other Saudi women were seen zip lining between cliffs. In keeping with local custom, many kept their faces and hair covered.

The weather in August in the village of al-Soudah, located in the southwest Asir province, is a comfortable 22 degrees Celsius (70 Fahrenheit) in August, unlike the capital, Riyadh, or the coastal city of Jiddah, where temperatures exceed 43 degrees Celsius (105 Fahrenheit) throughout the summer. In the winter, parts of the mountain range see snow.

Al-Soudah sits on part of the Sarawat Mountain range in the southwest of the Arabian Peninsula, some 3,000 meters (9,840 feet) above sea level. Its highlands are covered in the green of juniper trees. The area is also home to baboons, who were kept away from the festival with help from Human Wildlife Solutions based in Cape Town, South Africa. 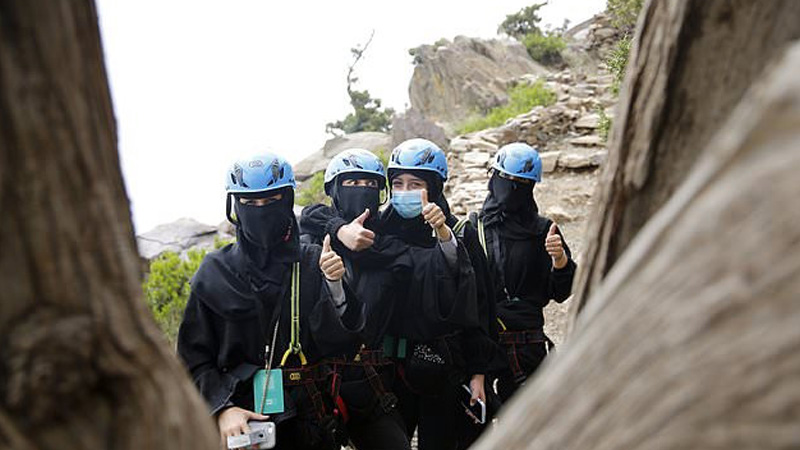 Jiddah city resident Noura al-Moammar said she was surprised by the region’s climate.

“I never thought, honestly, that my country is that rich with nature,” she said. “It’s amazing for us to discover and see the different cultures and landscapes and weather in our beautiful Saudi.”

In the nearby village of Rijal Almaa, the men wore flower crowns, or garlands, made from local flowers and herbs. Visitors here were treated to garlands of their own, local tribal dances, coffee, tea and evening lightshows displayed on the village’s 500-year-old distinct natural clay, stone and wood structures.

The festival also drew extreme sports enthusiasts, including wingsuit base jumpers. Saudi media reported that British adventurer and astronautical engineer Angelo Grubisic died during a jump off the side of a cliff at the festival when he experienced difficulties reaching the landing site at speeds of around 160 kilometers (100 miles) per hour.

The festival took place less than 50 kilometers (30 miles) from the airport in Abha, the capital city of the region of Asir, which has been targeted by Iranian-allied Yemeni rebels. Saudi Arabia has been waging war in Yemen against the rebels, also known as Houthis.

Still, visitors at the festival said they felt extremely secure.

“I couldn’t feel safer, honestly,” said Paris Verra, a 24-year-old American visitor. “The city is vibrant, and I was walking down the streets at like 1 and 2 a.m. and having tea with locals.”

“Coming from America, there’s obviously a lot of misconceptions … but I’m here to show and prove it’s nothing but incredible … I hope everybody gets a chance to visit this place one day,” she added. 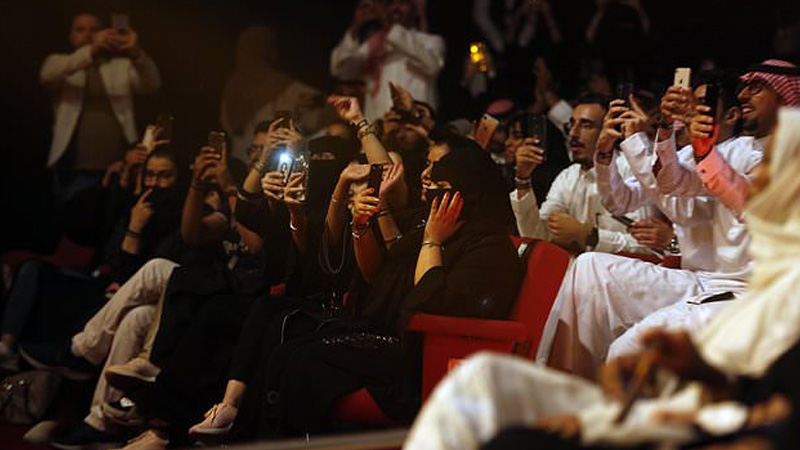 So serene was the vibe at the festival that Alwaleed al-Keaid, who runs a Saudi hiking company, led morning mediations atop the mountain.

“We start our mornings with a mediation session in this gorgeous environment where we thank God for this blessing and meditate,” he said. “When we’re done, we try the local bread with honey… and help people enjoy nature, forget about the rest of the world and live in the moment.”

The al-Soudah festival is one of 11 taking place in different parts of the country this year. The initiative, dubbed Saudi Seasons, is aimed at developing tourism and providing Saudis with temporary and permanent jobs.

Al-Madani, the CEO of the al-Soudah festival, said at least 515 young men and women were hired from the local community to assist in the monthlong event. Local businesses also got a boost by contributing to food trucks and other services.