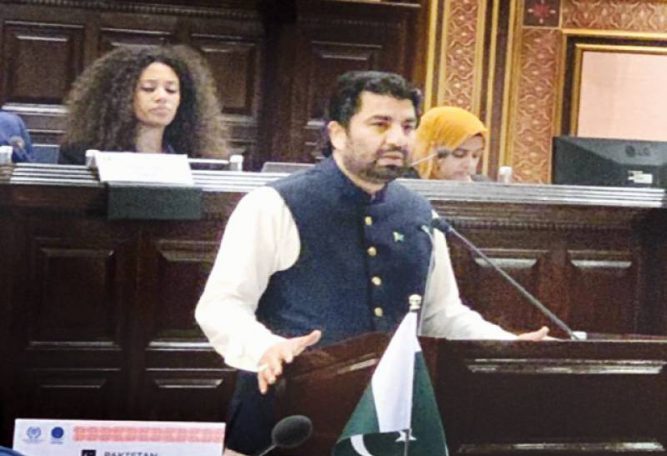 ISLAMABAD: Deputy Speaker National Assembly Qasim Khan Suri on Sunday raised the Kashmir cause at Sustainable Development Goals Summit in Maldives capital Male and apprised the participants about the unconstitutional steps and atrocities being committed by Indian government on innocent people of occupied Jammu and Kashmir.

The Indian delegation led by Speaker Lok Sabha protested and tried to interrupt deputy speaker’s speech, however their attempt went unheeded and Suri continued his speech and victoriously apprised the conference about the worst situation in Occupied Kashmir.

The entire valley had been converted into a heavily militarised zone and people were being stopped to perform their religious obligations, Suri informed the Summit, a message received here from Maldives said.

The deputy speaker stressed upon the South Asian countries to support Kashmiris for their right to self-determination under the auspices of United Nations (UN).

He said means of communication had been disconnected in the occupied valley aggravating the agony of the people, and that the international community must raise the Kashmir issue at appropriate level by asserting pressure on India for its resolution in accordance with the UN resolutions and aspiration of Kashmiri people.

He reiterated Pakistan’s stance for morally and diplomatically supporting Kashmiris, saying that the attitude of India towards Kashmir issue was putting South Asia peace and development at stake.