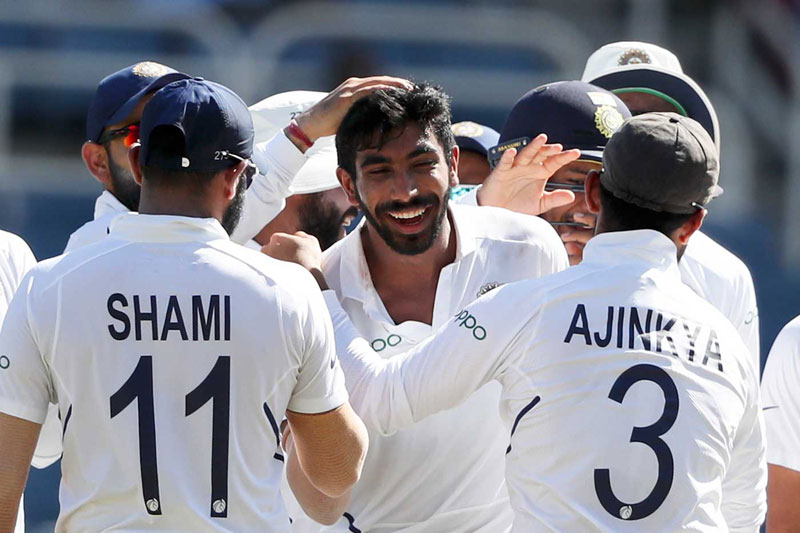 JAMAICA: India pace bowler Jasprit Bumrah completed a hat-trick against West Indies on the second day of the second Test in Jamaica on Saturday as the home team’s all-too-familiar batting woes continued with another collapse. Bumrah had left-hander Darren Bravo caught at second slip for four, before trapping both Shamarh Brooks and Roston Chase lbw for golden ducks at Sabina Park in Kingston. It was just the third test hat-trick by an India bowler, following Harbhajan Singh against Australia in Calcutta in 2001 and Irfan Pathan against Pakistan in Karachi in 2006. It was the 44th hat-trick in test history and the first at Sabina Park.

Bumrah picked up three other wickets to finish the day with 6-16 off 9.1 overs, after last week taking 5-7 in the second innings of the first Test. At stumps, West Indies were 87 runs for seven wickets, still 329 runs behind India’s first-innings total of 416. Bumrah, playing his 12th test, had already dismissed opener John Campbell caught-behind for two before embarking on his hat-trick in his next over. Bravo fell to a beautiful outswinger that he had little choice but to play, the ball flying to KL Rahul who took a sharp catch.

Brooks was next to go after he was trapped in front of middle stump and compounded the error by wasting a review. Chase, by contrast, was given not out after being hit on the pad. However, India captain Virat Kohli decided to review and replays and tracking technology showed the ball would have struck leg stump.

The decision was overturned, Bumrah was mobbed by his team mates, and Chase trudged off with West Indies reeling on 13 for four. Bumrah was not finished as he soon had opener Kraigg Brathwaite caught-behind for 10, and the home team were on the ropes at 22 for five. He left the field shortly afterwards with a calf cramp, but not before having bowled India into a match-winning position. In Bumrah’s absence, Shimron Hetymer clobbered seven fours in a knock of 34 before being bowled off an inside edge to Mohammed Shami. Later, Bumrah returned and continued to weave his magic. With his first ball of a new spell, he had West Indies captain Jason Holder caught at mid-off for 18.

Vihari century: Earlier, India resumed on day two at 264-5 and batted themselves into a commanding position as number six Hanuma Vihari scored his maiden century in his 10th Test innings. Vihari had come within seven runs of a century in the first test in Antigua last week, and he did not let the opportunity go begging this time. He made 111 and shared in a 112-run eighth-wicket partnership with Ishant Sharma, who chipped in with a career-high 57. Holder was the pick of West Indies’ bowlers with 5-77, picking up his 100th Test wicket in the process. India won the first match in the two-Test series by 318 runs.