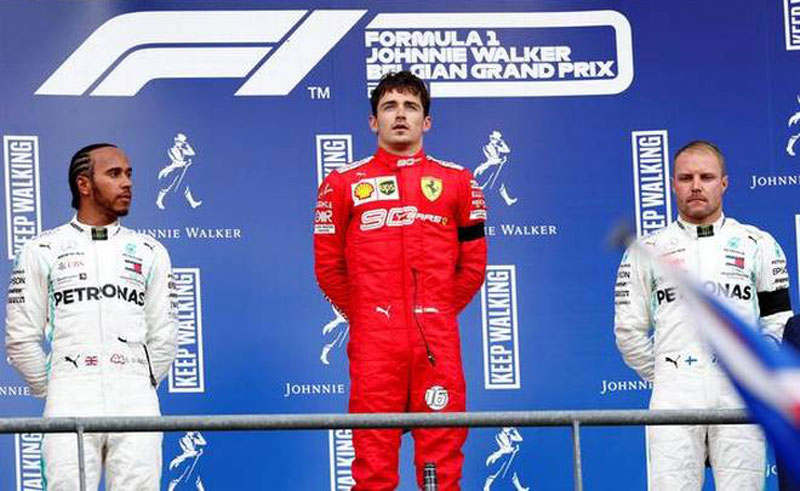 SPA-FRANCORCHAMPS: Charles Leclerc fended off a charging Lewis Hamilton to claim a bittersweet first Formula One win on Sunday as the Belgian Grand Prix brought the curtain down on a dark weekend for the sport after the death of French racer Anthoine Hubert. Monegasque Leclerc, who had started from pole, crossed the line less than a second ahead of Mercedes driver Hamilton, who nevertheless extended his lead in the overall standings to 65 points over team mate Valtteri Bottas, who finished third. Sunday’s victory must have felt like a long time coming for Leclerc, after engine problems denied the 21-year-old victory in the second race of the season in Bahrain in March. It was also Ferrari’s first win this year. But he took little joy in it after French racer Anthoine Hubert, 22, was killed in a high speed crash in a Formula Two race at the Spa-Francorchamps track on Saturday. “One hand I’ve got a dream since being a child that has been realised, on the other hand it has been a very difficult weekend since yesterday,” said Leclerc, who dedicated his win to Hubert. “We grew up together, my first ever race I did it with Anthoine, Esteban (Ocon), Pierre (Gasly). “I can’t fully enjoy my first victory, but it will definitely be a memory I will keep forever,” added Leclerc. Formula One held a minute’s silence in memory of Hubert on the grid before the start of the race, which got underway with a sombre mood hanging over the paddock. Leclerc kept his lead off the line. Behind him, Sebastian Vettel, starting second in a front row lockout for Ferrari, went wheel-to-wheel with Hamilton who began third. The Briton briefly got past but Vettel used the formidable straight line speed of his Ferrari to take second place back from the silver car. Hamilton finally overtook Vettel on the 32nd lap, with the German a sitting duck on fading tyres and chased Leclerc down. The Mercedes was clearly faster but ultimately ran out of laps. Vettel finished fourth, with the 32-year-old’s race going from bad to worse.