Dest, Pomykal among newcomers on US soccer roster 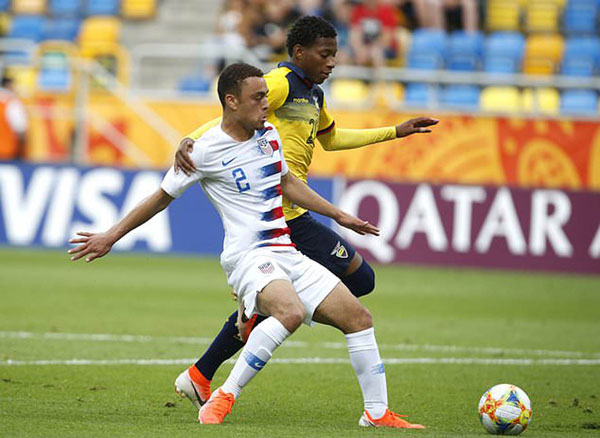 A year ahead of the start of World Cup qualifying, U.S. coach Gregg Berhalter is bringing in a trio of young players for exhibitions next month against Mexico and Uruguay, adding defenders Sergiño Dest and Miles Robinson to his player pool along with midfielder Paxton Pomykal.

All three have gained regular club playing time. Dest and Pomykal were on the U.S. team that reached the quarterfinals of this year’s Under-20 World Cup.

Dest, an 18-year-old who is right-footed, has at times played left back with Ajax – a position where the Americans lack depth.

“I’ve been really intrigued with how he’s been playing in Ajax,” Berhalter said during a conference call Wednesday. “I really like how he interprets it. In terms of will he play on the right or the left, it’s something that we’re going to work through in camp. But we’re open to him playing on either side.”

Robinson is a 22-year-old central defender with Atlanta.

“Form pushed Miles into the team,” Berhalter said. “He’s played exceptional over this last month and a half.”

Pomykal, a 19-year-old with Dallas, appears less likely to get into a match.

“He’s a guy that we want to bring around to just see the environment, get this experience,” Berhalter said. “This is his first real professional season and I think the physicality of the MLS has at times taken its toll on him, but he’s coming back and rebounded in a good way.”

Christian Pulisic, the 20-year-old star in his first season with Chelsea, was listed as a forward rather than a midfielder on the 26-man roster.

“We want him to be able to affect games in a number of different ways,” Berhalter said. “We want to be able to isolate him one vs. one at times but we also want him getting them ball between the lines.”

Josh Sargent, a 19-year-old forward, also was among the selections after getting cut ahead of the CONCACAF Gold Cup, the championship of North and Central America and the Caribbean. He has played just eight minutes in Werder Bremen’s first two matches.

Berhalter omitted Toronto forward Jozy Altidore, midfielder Michael Bradley and defender Omar Gonzalez, who have a pair of Major League Soccer club matches during the international fixture window. A former Columbus coach, Berhalter criticized the league’s scheduling. “One thing I’ve been a little bit disappointed with is MLS teams opting to play in FIFA windows,” he said. “It’s infringing on the time we have with players.”

Berhalter selected 15 of his 23 Gold Cup players. Defender Matt Miazga was left off after getting hurt Saturday during Reading’s game against Huddersfield. Lille midfielder Tim Weah also is injured, and Newcastle defender DeAndre Yedlin and RB Leipzig midfielder Tyler Adams are still recovering from injuries that caused them to miss the CONCACAF Gold Cup last summer.

Wolfsburg defender John Brooks is back after missing the Gold Cup because of an injured knee ligament.