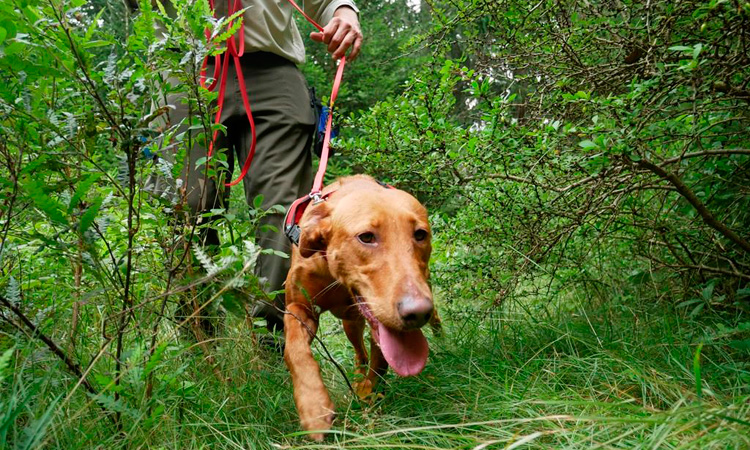 In brushy terrain where a botanical interloper evades detection by the human eye, count on Dia to sniff it out.

Dia is a spunky Labrador retriever trained to track down a yellow-flowered shrub that’s taking root in New York state parks. She’s one of a new breed of detection dog assisting conservationists in the fight against invasive species.

The shrub, which displaces native plants with thickets impenetrable to wildlife, is a widespread noxious weed in the Pacific Northwest but is fairly new to New York. Land managers hope to eradicate it before it becomes widespread.

“If we had to find all these plants ourselves, combing the grass for every tiny plant, it would take so much longer – and we’d still miss a lot,” Beese said on a recent morning after Dia showed him hundreds of Scotch broom shoots hidden in a field of tall grass and sweetfern.

Beese later uprooted them. The plants had been overlooked by volunteers with the conference’s Invasives Strike Force who had previously pulled 2,500 plants from the search area.

Detection dogs have long been used to sniff out drugs, explosives, cadavers and disaster survivors. In the mid ’90s, handlers started training them for conservation tasks such as sniffing out scat from endangered species and detecting trafficked ivory. Now, the olfactory prowess of detection dogs is becoming an important tool in the fight against invasive plants and insects.

“Our field in the last 15 years has just exploded,” said Pete Coppolillo, executive director of the nonprofit Working Dogs for Conservation in Bozeman, Montana. The organization partners with government agencies, researchers and nonprofits on five continents to provide trained dogs and handlers for conservation projects. One of its handlers mentored Beese on training Dia.

It’s doing a feasibility study in Minnesota on using detection dogs to identify trees invaded by emerald ash borers. In five Western states, dogs have been employed to detect invasive zebra and quagga mussels on boats.

“We’ve trained over 200 dog and handler teams to help in global wildlife trafficking, and now we’re doing a lot of invasive species work,” Coppolillo said. “It’s really exciting. As ecologists we’ve always talked of invasives as something we manage, but now we may actually be able to eradicate them in some places.”

Dyer’s woad, a knee-high weed from Russia that lights up roadsides with golden blossoms across the West, is a case study of how dogs can eradicate invasives that elude human crews.

Weed-pulling teams had tried for years to get rid of the weed at Mount Sentinel in Missoula, Montana, without making much headway. A border collie and a golden retriever from Working Dogs for Conservation were brought in to focus the teams’ efforts. Within a few years the plants were almost gone.

The key is that the dogs can sniff out plants hidden among other species, and they don’t need flowers to identify them like people do. “That’s a game-changer,” Coppolillo said. “Each plant can set up to 15,000 seeds a year, and seeds can live seven years in the soil. Dogs find plants before they flower and reproduce.”

Working Dogs for Conservation trains shelter dogs for detection work, screening 1,000 dogs for every one they put to work. To make the cut, the dogs have to be not only good sniffers and high-energy, but also seriously obsessed with toys so they’ll stay motivated to work for a reward: the chance to chomp a ball.