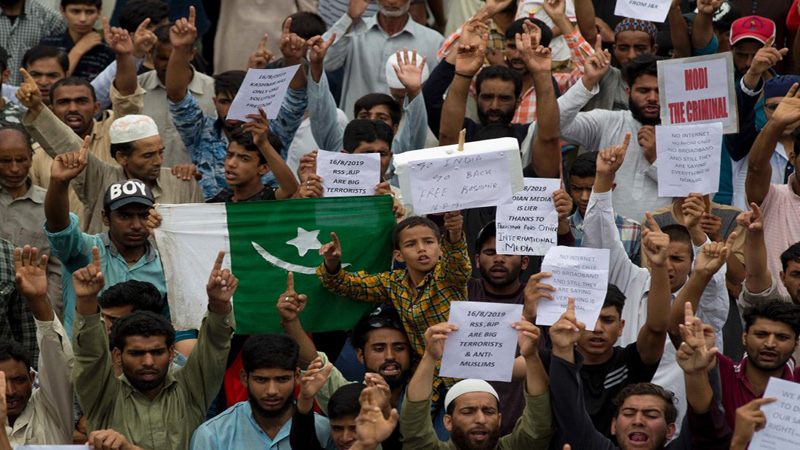 A group of Kashmiris, Pakistanis and Sikhs, led by Azad Jammu and Kashmir (AJK) Prime Minister Raja Farooq Haider, staged a protest in front of the United Nations (UN) Headquarters in New York on Sunday.

The demonstrators waved Kashmiri flags as they raised anti-India slogans and placards with inscriptions such as “Modi – the face of Indian terrorism”.

Speaking on the occasion, Haider called on the UN to play its due role to restore normalcy in Indian-held Kashmir (IHK). “The UN Security Council must ensure the implementation of its own resolutions and protect Kashmiris from India’s plans of genocide,” he said. “India is committing crimes against humanity in occupied Kashmir. It is planning genocide while making sure the world remains blind to the plight of millions of Kashmiris.”

The AJK premier said India was also killing innocent Kashmiris along the Line of Control (LoC) and was actively trying to hide its human rights abuses from the world.

He said the future negotiations on Kashmir should focus on conflict resolution, not management, in order to end the Indian occupation once and for all. He also warned New Delhi to stay clear of AJK and said any sort of attack on the Pakistani side of Kashmir would lead to full-scale war.

A prominent Sikh leader, Sardar Amarjit Singh, also voiced support for the cause of Kashmir and reaffirmed his call for the establishment of Khalistan.

Last week, UN human rights experts called on India to lift the lockdown and communication blockade it had imposed on IHK as a global advocacy group focusing on genocide issued an alert for the disputed region.

In a strong-worded statement released by the Office of the UN High Commissioner for Human Rights (OHCHR), the experts urged India to end what they termed a form of ‘collective punishment’ on Kashmiris.

“The shutdown of the Internet and telecommunication networks, without justification from the government [of India], are inconsistent with the fundamental norms of necessity and proportionality,” the statement quoted the experts as saying.

“The blackout is a form of collective punishment of the people of Jammu and Kashmir, without even a pretext of a precipitating offence.”

Meanwhile High Commissioner of Pakistan to Canada Raza Bashir Tarar on Sunday said that due to Indian atrocities and unending violence, IHK was in the grip of a mental health crisis and the international community should force India to provide access to the international organisations to address the important aspect of mental health of the millions of Kashmiris.

Addressing a mental health-related event organised by Canada-Pakistan Association (CPA-Ottawa), he said that in addition to forced disappearances, extrajudicial killings, use of pellet guns and mass rape of Kashmiri citizens had traumatised the residents of IHK and some studies had estimated that as many as 45 percent of the population was suffering from mental distress.

Tarar informed that lately it had been universally recognised that psychological issues begin from trauma caused in one’s life and “we need to address this problem in order to avoid many wrongdoings in our communities and around the world”.

“We can address many of our mental health-related problems by adopting a lifestyle that influences the state of both your physical and mental health,” he added.