* The story starts with the murder of Leyla Afife Kamile, better known as Tequila Leila 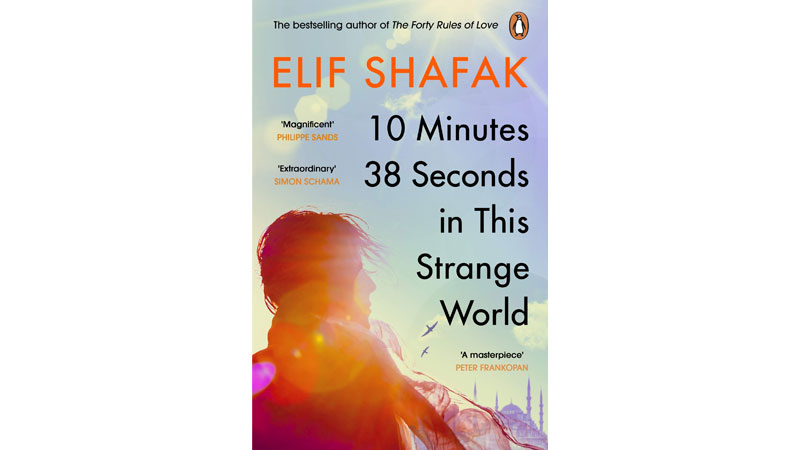 I knew I had to purchase the masterpiece I held in my hand as the book fiend in me read the synopsis of 10 Minutes & 38 Seconds in this Strange World by novelist and essayist Elif Shafak.

Her new release caught my eye and with a single glance at the back of the book, I put aside my doubt and bought it. This alluring work encapsulates the life of a broken woman from a small town in Turkey and her journey to her despicable end.

The story starts with the murder of Leyla Afife Kamile, better known as Tequila Leila. With a necklace secured around her bruised neck, she is found in a heap of rubble. Taking it as an opportunity, street boys snatch away the necklace from her lifeless body but that does not go unnoticed by Leila. Is she alive? Is she dead? Leila’s body has shut down and though her body is cold, her mind wanders on for 10 minutes and 38 seconds. In this short period, Leila takes our hand and leads us to her origin, her life, and her misery. With every passing minute, we learn another aspect of Leila, her choices, and her.

She was the child of her father’s second wife, whom she referred to as ‘Auntie’, her whole life. Oblivious to the fact that who she believed to be her mother, was, in fact, her father’s first wife. Leila was born into a family that hid behind lies and superstitions. Her family had kept a secret from her and when the truth was presented to her on a day when women from around town gathered, she fell into a pit unknown to her. Little Leila did not know at that time but this small pit would grow deeper where she would later dump all her pain.

At the age when she was supposed to be playing with dolls and jumping around with her cousins, she was exposed to the most horrific aspect of her life. Her uncle, whom she thought to be an angel, was anything but that. During a small family trip did she find out the true intentions of her uncle and his attempt to ruin her childhood. Leila found solace when her brother, Tarkan was born. It was a time when she found her peace and harmony but that too shattered when it was revealed that her brother was not the same as her, her cousins, her father or her mother. Though they did not have a name for it then, soon it came to be known as ‘Down Syndrome’.

She was the child of her father’s second wife, whom she referred to as ‘Auntie’, her whole life. Oblivious to the fact that who she believed to be her mother, was, in fact, her father’s first wife. Leila was born into a family that hid behind lies and superstitions. Her family had kept a secret from her and when the truth was presented to her on a day when women from around town gathered, she fell into a pit unknown to her

Leila’s father, in the time she was growing up, had a sort of epiphany and turned to his religion, to seek repentance for his excessive drinking, a new form of family grew overnight in the house. He taught Leila his tainted version of Islam and she feared for she believed her life was filled with sin. Yet, no one told her that her father had gathered information that was not even close to this religion. Her father, for whatever reason he may deem fit, settled to get Leila married. That is when all mayhem broke loose.

All through this time, when Leila was a sexual predator at the hands of her uncle, had to see her brother in the almost fatal condition, she made one friend, Sabotage Sanan. When her father decided that Leila had to leave school and get married was when it was revealed to her family what her uncle had done. Raped and pregnant, Leila was not sure who would marry a tattered woman (when even she believed it was her fault). Her uncle denied any such accusations and her father, though he knew, refused to let that come between two brothers and thus, Leila was set to marry her uncle’s son.

What misfortune it may seem to know that your family stood hidden behind a protective wall and push you towards the monster who you still have nightmares about.

The wedding was almost in session when one tragedy and a reprieve struck the household. Leila lost her baby, which was a sigh of relief for the family because the burden of reality was now lifted. The tragic event of Tarkan passing away at the age of nine, ruined the family. And the day he passed away, Leila gathered the little money she had and left town to the city of opportunities, Istanbul.

Once in Istanbul, Leila has her money stolen and is guided by what she thought was a good man into a household. She is deceived and sold into “The Street of Brothels”, all licensed, soon becoming Bitter Ma’s best employee, satisfying a line of clients for her. Leila’s misery exceeds as her days and months and years pass inside the God-forsaken brothel. Attacked by a client who tried to burn her with acid, Leila carries a scar on her body for the rest of her life. However, her life and adventures inside and outside the brothel led to her meeting her new friends; Zaynab122, Hollywood Humeyra, Jameela, and Nostalgia Nalan. All of Leila’s close friends are outcasts in one form or another. While one is an African among the fair colour ladies, the other is divorced and a pub singer; A religious dwarf who has many arguments with an atheist who changes his gender from male to female. A man who falls in love with Leila but never had the opportunity to say so.

It is through this brothel that Leila found her escape, D/Ali. A revolutionist in the 1960s of Turkey, aiming to accomplish communism in a state where equality prevails. After coming back and forth to meet Leila, D/Ali proposes and marries her. Although Leila does not agree with D/Ali’s concept of politics, she never uttered a word and followed him with his revolutionist strikes till one inauspicious day, D/Ali is killed in the event. Leila struck with yet another desolation, rolls back into the brothel and pleases clients to pay off D/Ali’s debt and her apartment’s rent.

As Leila turns back into the profession of mere pleasing, she is persuaded by Bitter Ma to take on a client that becomes the end of Leila. Helping a man who is stuck between his family’s fortune and his lover, Leila exits the hotel and is encouraged by two men into a car where Leila is killed, her misfortune settled.

As Leila’s mind shuts off, she tells us her entire story from her ever depleting childhood to her death. It is no mystery that Leila’s life has been a series of unfortunate events and be what it may, it had made her into a shell of a human being.

Leila’s body is examined in the morgue where a medical examiner determines the cause of death. Strangled to death and no family to claim the body, Leila is destined to be buried into an eerie cemetery known as “Cemetery of the Companionless”. This reclusive place is filled with bodies of rapists, murderers, prostitutes, and abandoned bodies; with tombstones made of wood identified by a mere number. Leila’s five faithful friends, stand outside the Morgue to claim her body and give her the burial she deserves, but they are turned away for not being family.

With the help of an old man in the morgue and a little convincing by Nalan, the five friends decide to retrieve Leila’s body, bury her next to D/Ali. Carrying shovels inside the stolen van of Sanan’s father-in-law, the friends head out. The unnerving location scared the group which results in Sanan getting drunk and Nalan doing all the work on her own. They heave out Leila’s body and take it to the van when they are spotted by the authorities. Speeding away into Istanbul, Nalan realizes that no Imam is available to lead Leila’s funeral prayer. Among the argument, it is revealed by Zaynab that Leila wished to become a companion of the ocean. With the authorities surrounding them and a gun pointed to their heads, Leila’s body lied in the arms of Sanan and Nalan on the top of the infamous Bosphorus Bridge. Once in the water, Leila met the blue beeta fish and found her peace in a life where she was consumed by unhappiness and loneliness.

Leila’s life was unfortunate from the day she was born, met with misery upon misery, she became a shell that consumed the pain of her past and her present. Being settled into the water might have been her concept of release from the misery that she took in for all those years. Being raped by her uncle, forced into a marriage that would break, discarded by her family, deceived into prostitution, and losing her one love, Leila endured through it all. She became the support of her friends and the six misfits joined to make a reunion that lasted them a lifetime.