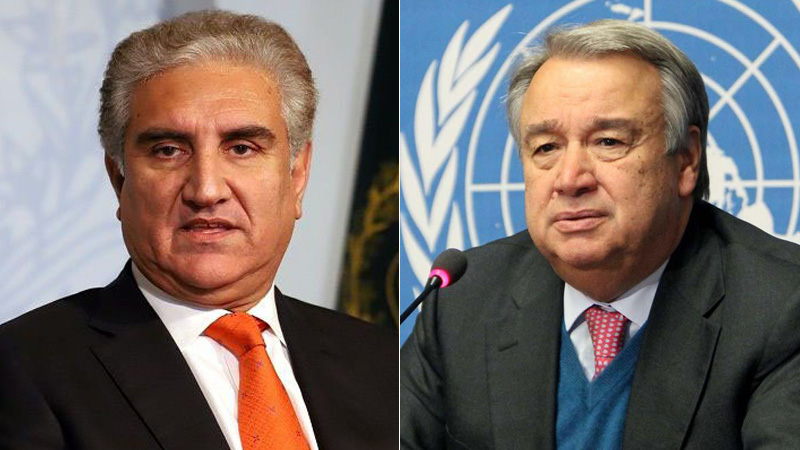 Foreign Minister Shah Mahmood Qureshi Saturday urged UN Secretary General Antonio Guterres to immediately intervene, and play his role for safety and security of the people of in Indian-held Kashmir (IHK), who have been bracing relentless siege of the Indian occupation forces for the last 20 days.

“I urged the UN to step forward immediately and play its role in protecting lives of innocent Kashmiris on war footing,” the foreign minister told a press conference here, adding that he held a detailed telephonic conversation with the United Nations secretary general, who was in Paris, and apprised him about the fast worsening situation in the occupied valley, the unabated lockdown, grave human rights violations, and the scarcity of food and medicines in the wake of India’s unilateral and illegal steps.

Qureshi said that he conveyed the Pakistani government’s gratitude to UNHCHR’s recent report on human rights violations in Held Kashmir. He also invited the UN chief to visit South Asia and Jammu and Kashmir region despite his tight schedule. “The situation demands the UN chief to visit South Asia and especially the whole region of Kashmir on both sides of the Line of Control despite his tight schedule. So he can witness the situation on the ground and inform the world about it,” he said.

Qureshi said the UN secretary general was reminded that there are three parties to the dispute. “Pakistan and the Kashmiris have already vehemently rejected the unilateral and illegal Indian steps, whereas the third party – India – stands divided as a huge strata of Indian society and opposition parties have been opposing Modi’s illegal steps in Kashmir,” he said.

The minister said the fascist regime of Narendra Modi manifested its intention further after a delegation of nine Indian opposition parties led by Congress leader Rahul Gandhi – who had gone to assess the situation in the Indian-held Kashmir – were detained at the Srinagar airport and deported back to New Delhi. Furthermore, party leaders of Congress who were holding a press conference were also arrested, he said. “Such is the democratic face of India, the world is today witnessing. How the Modi government, which did not sit with its own people, can sit with Pakistan to resolve the issue,” he asked.

The foreign minister lauded the Kashmiri people who have been uploading footages of their struggle as there is complete communication shutdown in the occupied valley. “Yesterday, the Kashmiris held a demonstration after Friday prayers and the occupation forces used tear gas and pellet guns against them as a result a large number of protestors were injured,” he said.

Qureshi said the UN Human Rights Commissioner has also been urged to intervene to protect the lives of Kashmiris.

Earlier, in line with the continuing diplomatic outreach, Foreign Minister Qureshi spoke with UN Secretary General Antonio Guterres to brief him on the deteriorating human rights and humanitarian situation in the occupied valley.

According to a Foreign Office press release, they discussed the risks and dangers to regional peace and security.

Secretary General Guterres said he is closely monitoring the situation and will remain engaged on the evolving developments. The foreign minister and the secretary general agreed to remain in contact.

Kashmir has been under curfew and lockdown since August 5 after the Indian government abolished Article 370, which granted special status to the valley. The curfew and lockdown have led to protests in the valley with thousands of Kashmiris including Hurriyat leaders placed under house arrest or detained.

UN-based organisation Genocide Watch has issued an alert and urged the United Nations and its members to warn India not to commit genocide in the occupied valley.

Prime Minister Imran Khan has repeatedly warned the international community that the leadership of Indian will probably attempt a false flag operation to divert attention from the massive human rights violations and unleashing of terror in the occupied valley.

In a meeting held last week, members of the United Nations Security Council for the first time in five decades discussed the critical situation in Held Kashmir, urging parties to the dispute to refrain from taking any unilateral action.