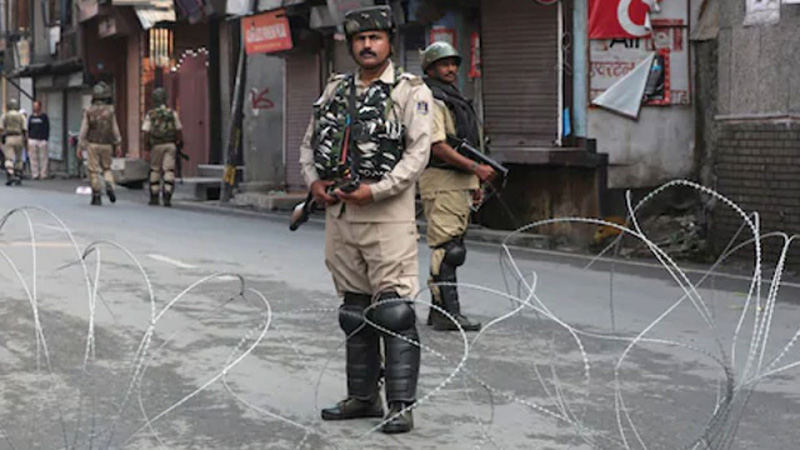 Indian forces continued their lockdown of the occupied valley for the 20th day on Saturday, after New Delhi revoked Article 370 of the constitution that gave a special status to the disputed territory.

According to the Kashmir Media Service, due to severe blockade, people are facing acute shortage of essential commodities including food and life-saving medicines. Hundreds of thousands of people are besieged and Jammu and Kashmir has become a jail for its inhabitants. Internet and phone communications have been cut and tens of thousands of troop reinforcements have flooded the main city of Srinagar and other towns and villages in the occupied valley. Residents have been confined to their houses due to stringent restrictions amid all the communication links of the territory with the outside world snapped by the authorities.

The curfew and lockdown has led to protests in the valley with thousands of Kashmiris including Hurriyat leaders placed under house arrest or detained.

Residents in the Muslim-majority region have complained of a stifling environment as well as the inability to get in touch with family and friends worried about their wellbeing.

On Friday, Indian authorities in the main city of occupied valley tightened security after local leaders called for a protest march to a UN office, with streets bristling with paramilitary personnel and some blocked by checkpoints. Posters appeared overnight this week in Srinagar calling for a march to the office of the UN Military Observer Group for India and Pakistan (UNMOGIP) to protest against India’s revocation of Jammu and Kashmir state’s special autonomy. The posters called for preachers to educate the public about the ‘explosive situation arising from India’s political, geographical and demographic plans’ in Kashmir.

On Friday, several dozen Indian paramilitary personnel manned at least two barriers on the main road leading to the office of UNMOGIP in Srinagar and public movement around it was blocked. Entry into the city’s old quarter, which has long been a centre for protests, was severely curtailed, as policemen blocked street after street with concertina wire. Large swathes of Srinagar remained deserted with shops shut except for some provision stores with shutters half-down. Police vans patrolled some areas announcing a curfew and asking people to stay indoors.

But hundreds of Kashmiris defied the curfew and other restrictions to hold a forceful demonstration in Srinagar against the illegal occupation and scrapping of special status of the territory. Nearly 1,000 people including men, women, and children took part in a demonstration in Soura area of Srinagar after Friday prayers, as Indian troops fired pellets and teargas shells to disperse them. Several people were injured as the firing triggered intense clashes between troops and protesters.

United Nations human rights experts have urged India to end the crackdown on freedom of expression, access to information and peaceful protests in occupied Kashmir.