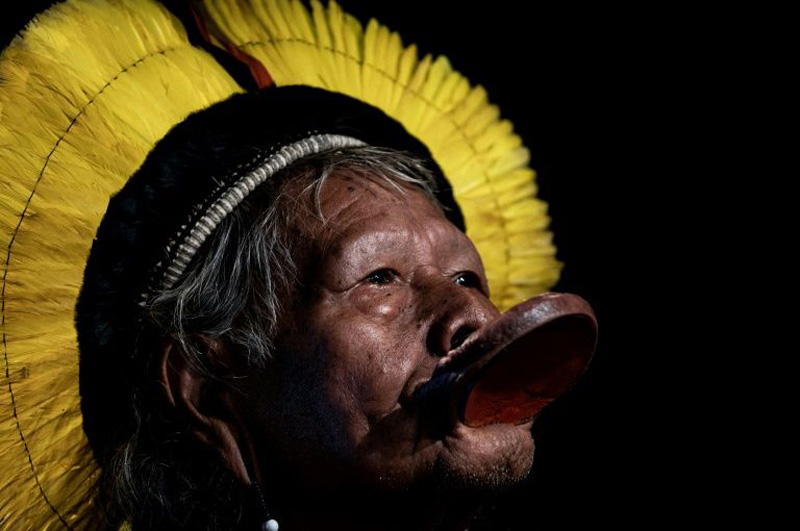 Brazil’s legendary indigenous chief Raoni on Friday accused President Jair Bolsonaro of wanting to destroy the Amazon rainforest and called for international help to put out fires raging in the region.

The elderly Kayapo chief, internationally recognizable through his traditional lip plate and feather headdress, called for Bolsonaro’s removal from power, as a global outcry over the blazes ignites protests around the world.

“He wants to finish with the forest, with us. It’s really terrible what he does,” Raoni Metuktire told AFP by telephone from Germany, accusing Bolsonaro of emboldening farmers, loggers and miners.

“We have to get him out soon.”

Raoni, who is famous for his work campaigning in defense of Brazil’s rainforest alongside personalities like pop star Sting, pleaded for international help to extinguish the fires.

The latest official figures show 76,720 forest fires were recorded in Brazil so far this year — the highest number for any year since 2013 — which experts blame on accelerating deforestation as land is cleared during the months-long dry season to make way for crops or grazing.

More than half are in the Amazon.

Around 700 new fires were ignited between Wednesday and Thursday, according to the National Institute for Space Research.

“We cannot let it burn like that,” Raoni said. “What is happening is extremely dangerous.”

Raoni said he would soon return to Brazil and mobilize to end the “attacks on the environment.”

“When I see these fires I feel very sad,” he said, warning it could get worse if no action is taken to preserve the Amazon.

His remarks come as Bolsonaro authorized the deployment of the armed forces to help put out the fires, amid growing European criticism as well as offers of assistance from US President Donald Trump and UK Prime Minister Boris Johnson. Several thousand protesters took to the streets in Brazil to express their outrage over the destruction, after demonstrations in Europe.