Powell: No clear hint on rates but says Fed will aid economy

* The outlook for the US economy, Powell said, remains favorable but continues to face risks
* Trump, who has relentlessly attacked Powell and the Fed over its rate policies, kept up his verbal assaults on Twitter 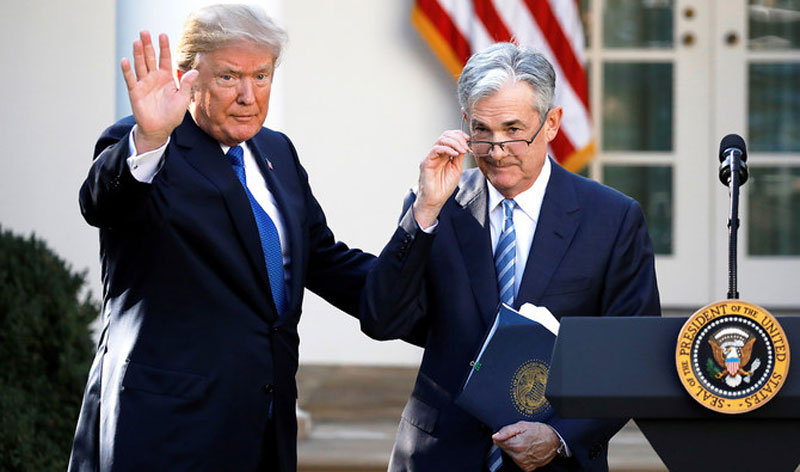 Federal Reserve Chairman Jerome Powell sent no clear signal Friday that the Fed will further cut interest rates this year but said it would “act as appropriate” to sustain the expansion — phrasing that analysts see as suggesting rate cuts.

Speaking to a gathering of central bankers in Jackson Hole, Wyoming, Powell didn’t give financial markets explicit guidance on whether or how many rate cuts might be coming the rest of the year. The Fed cut rates last month for the first time in a decade, and financial markets have baked in the likelihood of more rate cuts this year.

The outlook for the US economy, Powell said, remains favorable but continues to face risks. He pointed to increasing evidence of a global economic slowdown and suggested that uncertainty from Trump’s trade wars has contributed to it.

Reacting to the speech Friday, Trump, who has relentlessly attacked Powell and the Fed over its rate policies, kept up his verbal assaults on Twitter:

“As usual, the Fed did NOTHING!” Trump tweeted. “It is incredible that they can ‘speak’without knowing or asking what I am doing, which will be announced shortly. We have a very strong dollar and a very weak Fed. I will work “brilliantly” with both, and the US will do great.” Trump added: “My only question is, who is our bigger enemy, Jay Powel (sic) or Chairman Xi?“ Powell’s speech comes against the backdrop of a vulnerable economy, with the financial world seeking clarity on whether last month’s rate decision likely marked the start of a period of easier credit.

The confusion only heightened in the days leading to the Jackson Hole conference, at which Powell gave the keynote address. Minutes of the Fed’s July meeting released Wednesday showed that although officials voted 8-2 to cut their benchmark rate by a quarter-point, there was a wider divergence of opinion on the committee than the two dissenting votes against the rate cut had indicated. The minutes showed that two Fed officials favored a more aggressive half-point rate cut, while some others adopted the polar opposite view: They felt the Fed shouldn’t cut rates at all.

The minutes depicted the rate cut as a “mid-cycle adjustment,” the phrase Powell had used at his news conference after the rate cut. That wording upset traders who interpreted the remark as suggesting that the Fed might not be preparing for a series of rate cuts to support an economy that’s struggling with a global slowdown and escalating uncertainty from President Donald Trump’s trade war with China.

There was even a difference of opinion among the Fed members who favored a rate cut, the minutes showed, with some concerned most about subpar inflation and others worried more about the threats to economic growth.

Comments Thursday from Fed officials gathering in Jackson Hole reflected the committee’s sharp divisions, including some reluctance to cut rates at least until the economic picture changes. “I think we should stay here for a while and see how things play out,” said Patrick Harker, the president of the Fed’s Philadelphia regional bank.

Esther George, president of the Fed’s Kansas City regional bank and one of the dissenting votes in July, said, “While I see downside risk, I wasn’t ready to act on that relative to the performance of the economy.” George said she saw some areas of strength, including very low unemployment and inflation now closer to the Fed’s target level. She said her decision on a possible future rate cut would depend on forthcoming data releases.

Robert Kaplan, president of the Fed’s Dallas branch indicated that he might be prepared to support further rate cuts.

If “we are seeing some weakness in manufacturing and global growth, then it may be good to take some action,” Kaplan said.

George was interviewed on Fox Business Network; Harker and Kaplan spoke on CNBC.

The CME Group, which tracks investor bets on central bank policy, is projecting the likelihood that the Fed will cut rates at least twice more before year’s end.

Adding to the pressures on the Fed, Trump has kept up his attacks on the central bank and on Powell personally, arguing that Fed officials have kept rates too high and should be cutting them aggressively.

Trump has argued that a full percentage-point rate reduction in coming months would be appropriate — a suggestion that most economists consider extravagantly excessive as well as an improper intrusion on the Fed’s political independence.

The president contends that lower rates in other countries have caused the dollar to rise in value and thereby hurt US export sales.