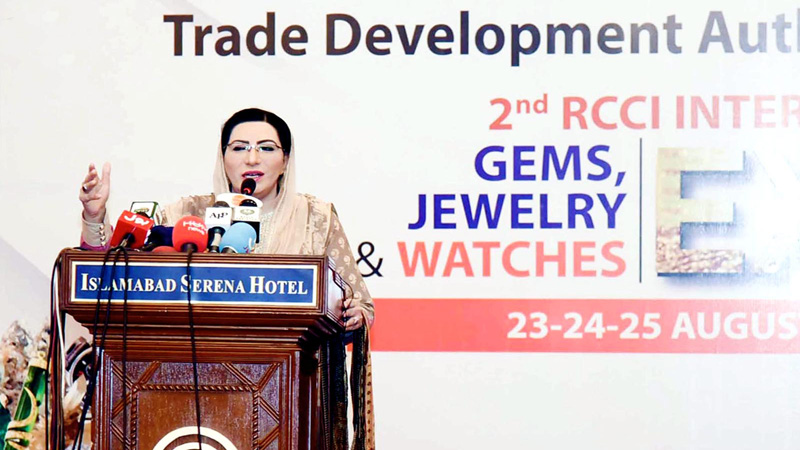 Speaking at the gems and jewellery exposition, organized by RCCI in collaboration with Trade Development Authority of Pakistan (TDAP), she declared the chamber as a solidarity forum for Kashmiris who had become victim of state terrorism under rule of Bharatiya Janata Party, led by Rashtriya Swayamsevak Sangh’s (RSS) activist Narendra Modi.

Dr Firdous said since the government, Foreign Office, parliamentarians, Pakistani expatriates and civil society were proactively highlighting the plight of Kashmiris across the world but it was imperative for the business community to sensitise their counterparts in other countries about prevailing situation in IHK.

She appealed businessmen to act as the country’s ambassador during their foreign visits and expose abhorrent face of India before international community, in addition to their routine marketing practices.

Soliciting the assistance of business associations, she said the government would chalk out a strategy to make Azad and Jammu Kashmir financially empowered. “A link will be set up to ensure connectivity between Kashmiri women from across the Line of Control and business community for making them financially strong,” she added.

The special assistant said the government was initiating steps for the welfare of people, who became victims of unprovoked Indian firing along the LoC.

In modern era, she said wars were fought on economic front, rather in battlefields and only those nations could succeed, that nurture strong economies, she added.

Dr Firdous said economic empowerment of women was imperative to make Pakistan a developed and progressive country since they constituted 52 per cent of the national population.

She said the leading role of Mohtarma Fatima Jinnah during Freedom Movement along with his brother Quaid-i-Azam Mohammad Ali Jinnah, was a strong message for future generations that no nation could prosper without active participation of women.

Citing the rise of Malaysia, she said the country emerged as a developed Islamic state with a visionary Prime Minister (Mahathir Mohamad) who ensured 100 percent literacy of girls.

She said the government was taking multiple initiatives to ensure equal women representation in all walks of life in line with vision of Prime Minister Imran Khan, who was a strong proponent of women empowerment.

Dr Firdous Awan said the government was all set to launch its ‘Kamyab Jawan Programme’ since the prime minister had given its formal approval. The government had allocated 25 percent quota in that programme which would eventually benefit 52 percent women population, she added.

She underlined the need for promoting cottage industry which would help women financially without compromising the socio-religious and cultural values. She said the people had given a mandate to Imran Khan in 2018 elections to rid the country of the rotten system of status quo. Apprising the diplomats, who was invited by the RCCI in event, about Kashmir situation she said India had converted Occupied Kashmir into biggest jail of the world by imposing curfew in the entire state.

The special assistant said it was not a conflict between two countries but two ideologies, adding Kashmiris had moderate and peaceful ideology of Islam whereas India supported hard-line Hindu extremism. She urged the United Nations, international human rights organizations to take cognizance of the grave situation of the IHK and take concrete steps for saving lives of besieged Kashmiris.

Separately, Firdous said it was a clear message to state terrorist and Hindu extremist leadership of India that all segments of the nation stood united for Kashmir cause.

Talking to media persons at the Parliament House along with Minister for Kashmir Affairs Ali Amin Gandpur, Kashmiri leader Mushaal Hussein Mullick and leaders of journalist community, she paid tribute to the media men for taking the initiative to hoist the national flag at the Line of Control (LoC).

“Pakistanis feel the pain of Kashmiri brethren in IHK who are inflicted with unprecedented violence and state terrorism,” she added.

The SAPM said that unarmed and innocent Kashmiris were barred from offering Friday prayers and Indian armed forces had been deputed outside their houses to impose the curfew.