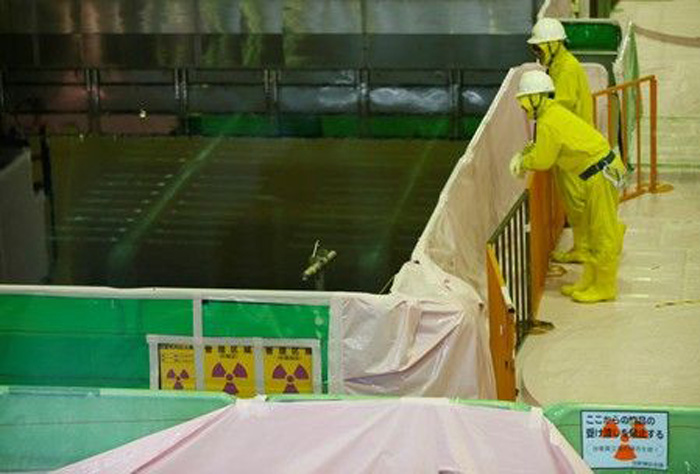 Japan’s nuclear operators are starting to sell some of their huge holdings of uranium fuel, as chances fade of restarting many more reactors eight years after the Fukushima nuclear disaster.

The sales so far have been small, but were made at values well below their purchase price and are likely to further depress the already beaten-down uranium market, say two senior market specialists.

They could also focus attention on the balance sheets of the country’s utilities, bolstered by holdings of nuclear fuel valued at 2.5 trillion yen (19.19 billion pounds), a figure that market experts say is highly unrealistic. “Given the extended shutdown of our reactors, we are selling uranium as well as cancelling long-term contracts where necessary,” Japan Atomic told Reuters in a statement. The company, which is yet to receive all the regulatory approvals needed to restart reactors at either of its two nuclear stations, declined to provide further details.

Before the meltdowns at Tokyo Electric Power’s Fukushima plant in March 2011 after an earthquake and tsunami, Japan was the world’s third-biggest user of nuclear power behind the United States and France, operating 54 nuclear reactors. It is permanently shutting 40% of its facilities and just nine of the 33 remaining have restarted. With reactors also being closed in the United States, Germany, Belgium and other countries, traders and specialists say the market is likely to remain depressed for years.

Unlike other commodities such as crude oil, most of the nuclear fuel market is privately traded, generally on long-term contracts, although CME Group’s NYMEX has a futures contract for uranium oxide (U308).

The contract is settled on prices supplied by US-based UxC LLC and is currently trading at about a third of where it was before Fukushima. US based UxC, LLC also calculates prices for converted and enriched uranium.

Sales by Japanese utilities “are definitely showing up more in the market,” said one US-based market specialist, who requested anonymity because of the sensitive nature of the industry.

“Some are selling uranium, some are selling more upstream products or services,” such as enriched uranium, he said. “Japanese inventory is a big overhang in the market.”

A senior fuel trader told Reuters his company had purchased nuclear fuel from a Japanese utility but declined to give details.

Japan Atomic was responding to a Reuters survey of 10 Japanese utilities that have operated nuclear plants. All the other utilities declined to comment on whether they had sold any nuclear fuel.

One said it adjusts supplies for optimal inventory levels and three said they have delayed deliveries of fuel. Tepco in 2017 cancelled a supply contract with Canadian uranium fuel producer Cameco, which was awarded $40.3 million in damages last month by an arbitration panel.

“Tepco has made efforts to reduce its holdings of nuclear fuel, such as by partly reducing uranium purchase contracts,” the company told Reuters, without giving further details.

Unlike in Europe and the United States, Japanese utilities are not required to mark to market their fuel holdings. They are booked on Japanese operators’ balance sheets as fixed assets at the purchase price, the utilities told Reuters.

“If the utilities are not going to use the fuel, and it is unlikely they will get many more reactors going, then at some point they will have to take losses on their holdings,” said Tom O’Sullivan, the founder of energy consultancy Mathyos Japan.

Sector-wide the nuclear fuel valuation is nearly 50 percent of the market value of the nine publicly traded utilities, calculations by Reuters showed.