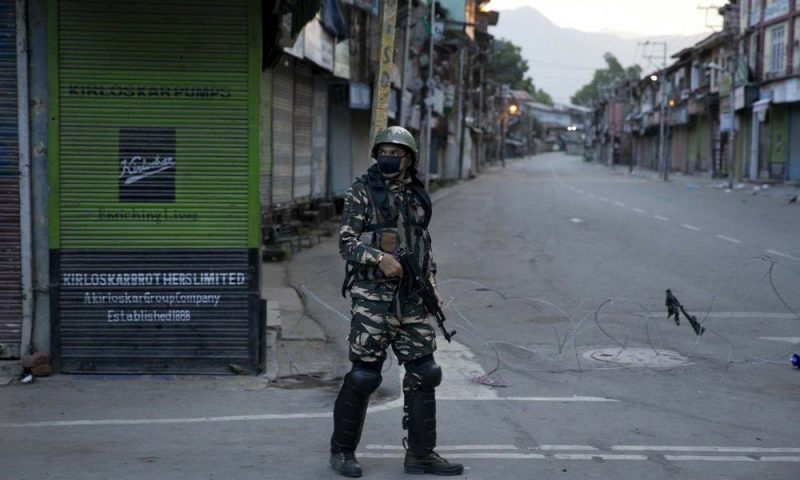 Police and paramilitary soldiers re-imposed restrictions on traffic in areas where they had been eased, putting steel barricades back up and laying razor wire across roads, bridges and intersections.

The posters called for preachers to educate the public about the “explosive situation arising from India’s political, geographical and demographic plans” in Kashmir.

It was not immediately possible to verify that the posters were connected to the Kashmiri leaders because two are under house arrest and one is being held in a New Delhi jail.

A paramilitary officer said all vehicles and pedestrians were banned in the area to stop any anti-India protest.

“We have directions to not allow even top officials in the area,” he said, speaking on condition of anonymity in keeping with department policy.

The move by the Modi government touched off anger among residents of Indian-occupied Kashmir.

The changes in Indian-occupied Kashmir’s status allow anyone to buy land in the territory, which some Kashmiris fear could mean an influx of Hindus who would change the region’s culture and demographics.

Kashmiris remain under a blockade

Since Monday, two weeks since occupied Kashmir’s special status was abolished, authorities have eased some restrictions, allowing some businesses to reopen in Srinagar.

Landline phone service has been restored in some areas. Officials also say they have opened grade schools. But both student and teacher attendance has been sparse.

However, downtown Srinagar, the urban heart of resistance against India where about half a million people live, remained under a blockade. Some vendors and shopkeepers complained that police were forcing them to resume business to “enforce normalcy” in occupied Kashmir.

“They are telling us if you don’t resume business, we will take away the space allotted for vendors,” said Mohammed Akbar, a vendor in the city’s main business center, Lal Chowk. Some taxi drivers also said authorities were forcing them on the roads even without passengers so that roads appeared busy with traffic.

“They are exploiting the concerns of people pertaining to their livelihood. They’re using the same tactics they’ve employed time and again to break our resolve,” said Shakil Ahmed Bhat, a local resident. “But they should know that this time people will never surrender.”