America’s Cup winners back in groove for Olympics tilt 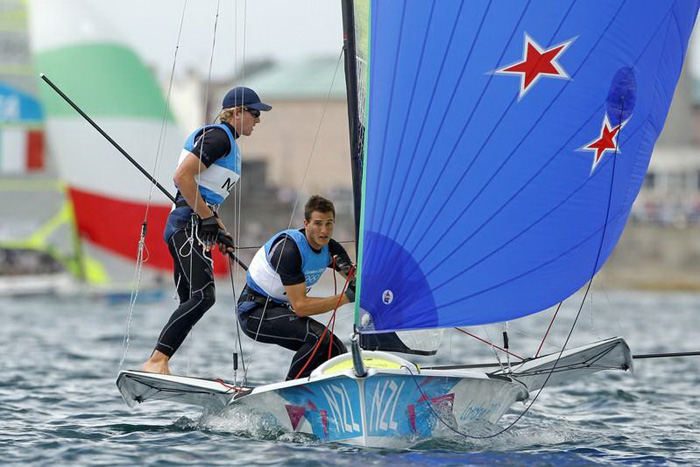 Winning the Tokyo Olympics test event in Enoshima may have appeared a cakewalk for Rio gold medallists Peter Burling and Blair Tuke, but the duo said it had taken them some time to get used to the 49er class yacht again.

The New Zealand pair dominated their sport in the previous Olympic cycle as they won all 28 of the major regattas between 2012 and 2016 before they sealed gold in Rio.

They then gave it away for about two and a half years as they helped Team New Zealand win the America’s Cup in 2017 before they raced in the Round the World Race on competing yachts.

They only returned to Olympics training less than a year ago and then had “four or five” regattas to get back up to speed again with the skiff before the test event at the Enoshima Yacht Harbour.

“It has taken a little while to get back into it,” Burling told Reuters via telephone from Japan on Thursday. “We had a decent break (from Olympic sailing) after the Rio Games until the first event this year (in April).

“It does take you little bit of time to get back into it and get all that race craft back.

“But we wouldn’t have done it if we didn’t think that we had a realistic shot at winning the gold again.”

They proved that against the world’s top crews when they produced a series of consistent finishes that included three victories and had sealed either first or second overall before the medal race on Wednesday.

They clinched over Britain’s Dylan Fletcher and Stuart Bithell.

Poland’s Pawel Kolodzinski and Lukasz Przbytek, who had been the only pair that could have overhauled them for first in the medal race, finished third overall after the New Zealanders had forced them across the start line early.

“They put themselves in a pretty compromised situation with about 10 or 15 seconds to go and we just aided them in that so they we were on the wrong side of the start line and from there it was quite easy,” Tuke said.

“We just made sure that we stayed between them and the next mark all the way around.”

Both were “happy with where we’re tracking” in terms of progress ahead of Tokyo with Burling pleased to have “tried out a few things” at the test event.

The Olympic preparations, however, will be shelved temporarily until the world championships in Auckland in December.

The pair instead return to duties with Team New Zealand, with the new AC75 foiling monohull almost ready to be launched.

“We should be on the water in the next few weeks with the America’s Cup,” Tuke said of the new yachts that will be used for the regatta in Auckland in early 2021.

“The next six months are just about the America’s Cup sailing and the world champs in Auckland, which will be a pretty cool event.”