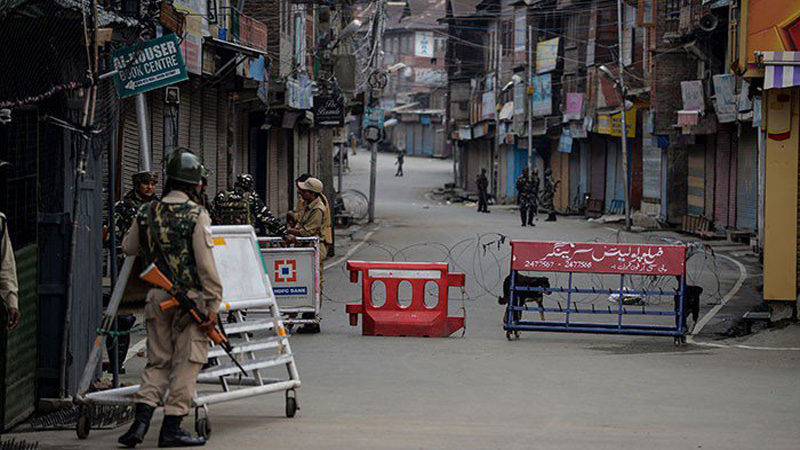 Genocide Watch, a global organisation dedicated to the prevention of genocide, has issued a warning alert for the Indian-held Kashmir.

Applying Prof Barbara Harff’s risk factors for genocide, the organisation has issued following early warnings of massacre in Kashmir: prior genocidal massacres and continuing impunity for such killings; continued armed conflict between India and Pakistan over LoC in Kashmir; an exclusionary ideology of ‘Hindutva’ by Modi’s ruling BJP; authoritarian military rule without legal restraints imposed by civilian Indian officials; rule by a minority military force (Hindus and Sikhs) over majority Muslim citizens; cut-off of communications and outside access by internet, media, and trade; widespread violations of basic human rights – torture, rape, two-year detentions without charge, arbitrary arrests and deportations of Muslim political and human rights leaders.

Classification: Hindu and Sikh Indian Army ‘us’ vs Kashmiri Muslim civilian ‘them’;

Persecution: Kashmiri Muslims are locked down, subjected to arrest, torture, rape, and murder;

Extermination: genocidal massacres occurred during Partition; since 1990, there have been at least 25 massacres with death tolls over 25: 10 of Muslims by Indian troops; 15 of Hindus by Muslim militants;

Denial: Modi and BJP say their goals are to ‘bring prosperity’ and ‘end terrorism’; they deny any massacres. No Indian Army troops or police are ever tried for torture, rape or murder. Modi’s takeover is popular in India.

The Genocide Watch called upon the United Nations and its members to warn India not to commit genocide in Kashmir.

Over seven million people in Assam State, mostly Muslims of Bengali descent, may lose their Indian citizenship and risk imprisonment in special ‘foreigner detention centers’. A process is now underway to ‘verify’ the citizenship of all 32 million inhabitants of Assam state, which requires each person to affirmatively prove that they are Indian and not an ‘illegal migrant’.

Beginning in colonial times, millions of ethnically Bengali Muslims settled in Assam. The 2011 Indian census put their number at 10.6 million in Assam state.

At the urging of Prime Minister Narendra Modi’s Hindu nationalist central government, Assam is updating its master list of ‘citizens’. Those classified as Indian citizens will receive new Indian identity cards, symbolizing their classification. Anyone not on the final ‘citizen’ list will be presumptively declared a ‘foreigner’, subject to statelessness and indefinite detention.

Assam’s Muslims are especially likely to be excluded from the ‘citizen’ list as part of a decades-long pattern of discrimination. The home minister of India has repeatedly referred to the Bengali Muslims as ‘termites’. Assam’s Chief Minister Sarbananda Sonowal has requested additional Indian government troops and police to arrest ‘foreigners’. The Assam state is constructing 10 new ‘foreigner’ detention centers to add to the six prisons already in existence.

Genocide Watch called upon the UN secretary general, the UN special advisor on the prevention of genocide, the UN high commissioner for human rights, and key UN member states to warn India not to strip citizenship from, imprison, and forcibly displace millions of Bengali Muslims, many of whom have lived their entire lives in Assam.