The Gulf’s war on smugglers 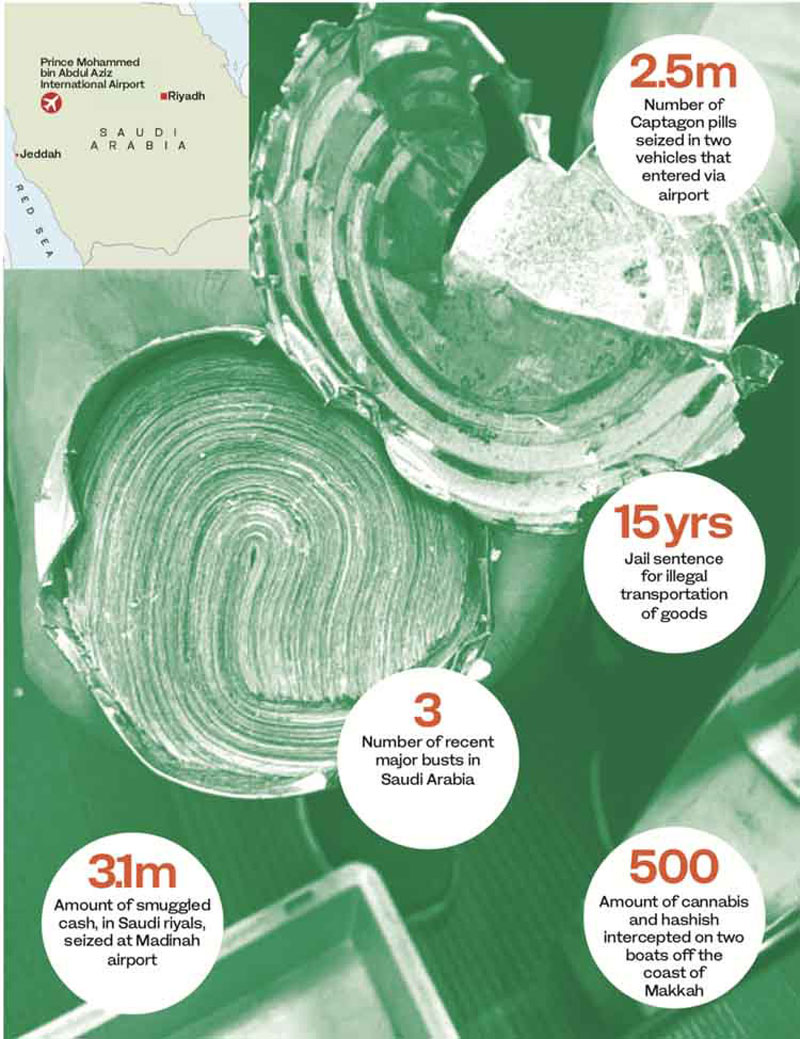 Experts say that illegal trafficking in all its guises is bringing in billions each year for criminals worldwide, and the problem is increasing across the globe and the region.

Adel Hamaizia, a research fellow for the Middle East and North Africa program at the Royal Institute of International Affairs at the think tank Chatham House, told Arab News that money laundering,  or cash smuggling, is a major trafficking problem for the Kingdom and wider GCC.

“One of the methods aiding capital flight in the GCC is old-school smuggling of cash as well as precious metals,” he said.

But trafficking of drugs, fuel and even wildlife are also adding to pressures facing customs officials.

“Cross-border fuel smuggling from Saudi Arabia into its neighbors has remained an enduring feature. However, energy pricing reforms in the Kingdom in recent years have stifled smugglers’ margins if not canceled them out altogether,” said Hamaizia. “When it comes to drugs, countries of the GCC serve as consumption destinations and transit hubs, but not production spaces.”

Many countries in the region serve as transit hubs for drug smuggling as a result of geography, infrastructure, porous borders and lengthy coastlines, he said.

“Drugs smuggled into GCC states include qat, opium, cannabis, and Captagon (the family of drugs known as amphetamines). Captagon is one of the major drugs smuggled from Lebanon, Syria, Iraq, Jordan and Egypt.

“Wildlife smuggling such as houbara birds, pangolins, ivory, rhinoceros horns and others are also common across Gulf states. Doha serves as transit hubs for birds, mammals, ivory, and reptiles being transported between Africa and Asia.”

The Gulf is a transit point for trade passing through the region, so any and all types of illicit goods are smuggled.

Channing Mavrellis, of the think tank Global Financial Integrity, which works to curtail trade-related illicit financial flows, also highlighted the growing threat smugglers pose in the GCC. “The Gulf is a transit point for trade passing through the region, so any and all types of illicit goods are smuggled,” he said.

Experts say smuggling tactics are becoming increasingly sophisticated. “The methods used depend largely on the type of good being smuggled, its quantity and the level of risk/enforcement,” said Mavrellis. “For bulk cash smuggling or drug trafficking in smaller quantities, someone may simply conceal the illicit goods on their body or in their luggage. For larger quantities, smugglers may conceal the goods in a shipment of legitimate goods.”

However, Hamaizia warned that criminals are adopting new high-tech tactics. “The smuggling of lightweight drugs is now often supported by drones,” he said.

Smugglers are also turning to social media. In a report — Social Media and Drug Smuggling — published in journals earlier this year, authors noted the trend, saying: “Social media can be used for legal or illegal purposes by many individuals. Some may use these applications for drug smuggling. For example, Saudi Arabia Directorate General of Narcotics Control has arrested eight individuals for drug smuggling through social media.”

According to customs law jointly adopted by GCC countries, illegal transportation of goods can carry a jail term of up to 15 years.

Meanwhile, many criminals are attempting to take advantage of the busy transit routes in the region.

Hamaizia said: “Traffickers and smugglers often opt for busier international airports where they may benefit from sloppier screening. Smugglers also focus on connecting flights, where screening is rushed and even non-existent in some cases.”

At Dubai International Airport, one of the region’s busiest hubs, authorities caught more than 1,000 people attempting to smuggle illegal goods into the UAE last year, with officials employing a wealth of new technologies.

These include the Ionscan 500 DT, which can detect a wide range of military, commercial and homemade explosives as well as common illegal drugs, and the Thermo FirstDefender, a handheld device used to identify unknown solids or liquid chemicals.

Mavrellis said the challenge at busy transit routes was to search and question travelers while keeping operations running smoothly.

“High volumes of international trade can make detecting smuggling difficult as customs agencies must strike a balance between trade facilitation and enforcement. Basically, it is the problem of finding a needle in a haystack — but without taking too much time,” he said.