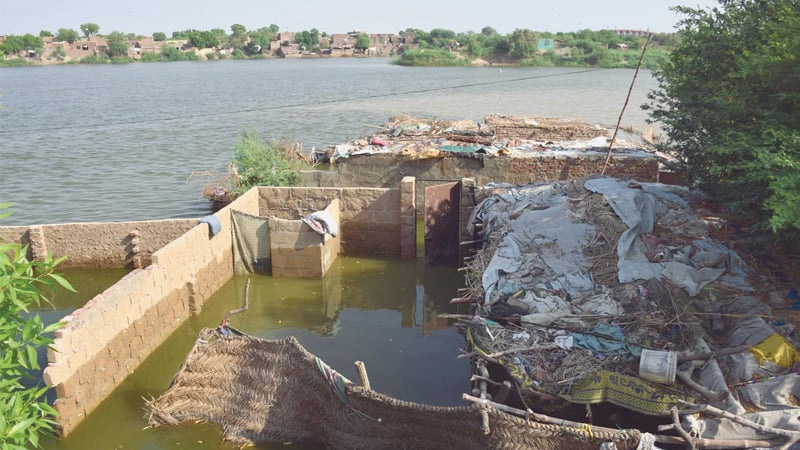 As many as 250 villages were inundated due to flood in Indus River at various places of Katcha area of Dadu and Jamshoro district on Wednesday.

SE irrigation of southern division Dadu, Sajid Ali Bhutto said that it was 67 miles of LS bund in the jurisdiction of Dadu and Jamshoro districts.

He said that flood water of river Indus has touched at bottom of gages of embankments of 11 miles out of 67 miles of LS bund in Dadu and Jamshoro district.

He said that it was only one historical vulnerable point of LS-Larkana Sehwan bund in Sehwan taluka but efforts were taken to face any situation.

While, secretary Irrigation Sindh, Saeed Ahmed Magnejo visited the vulnerable point of embankment at at Jamshoro front bund at left side of Kotri barrage. He directed irrigation officials on urgent base to start the work of Pitching, earth work and widening and stone dumping. Following directives of irrigation secretary Sindh, Saeed Ahmed Magnejo, the work of stone dumping, widening and pitching was started at embankment at Kotri barrage.

Secretary irrigation Sindh Saeed Ahmed Magnejo told that patrolling along with embankments at left and right side of river Indus was going on by irrigation officials and he was monitoring every situation but it was quite safe position of embankment at all barrages in Sindh.

Deputy Commissioner Jamshoro, Captain rtd Fareed u Ddin Mustafa visited the embankments at downstream and up stream of Kotri barrage and watched patrolling of irrigation officials along with embankments.

Meanwhile, following the serious flood warning in Satluj River earlier this week by NDMA, the administrations of districts located at the river bank have been advised to initiate necessary measures to face any emergency situation.

They advised to ensure timely actions on warnings issued by the concerned organizations to save the communities of low lying areas around the river bed, public and private property alongside with irrigation, drainage and flood protection infrastructure.

The PMD is monitoring the prevailing weather system in the overall perspective of anticipated rains and likely flood situation in the country, especially the enhanced inflows in Sutlej River and keeping all concerned fully abreast of the situation on round-the-clock basis through FFD, Lahore.

Authority also issued alert to people residing in and close to river banks and near plain water courses while vulnerable population has also been warned not to venture Nullahs crossing and flash flooding routes.

Relevant authorities have also been advised to take steps for raising awareness in public with regards to vacating dangerous buildings, remaining away from electric wires and avoid swimming during rain especially in underpasses.

Following the likely flooding situation that may cause traveling hindrances for public and rescue activities, National Highway Authority, (NHA) and Communication and Works Department (C&W) of respective provinces and regions have been advised to remain ready for restoring road linkages.

Moreover, all provincial health departments about pre-placement of necessary staff have also been asked to remain on standby in case of emergency.

Earlier, National Disaster Management Authority (NDMA) warned of increasing water levels in River Sutlej at Ganda Singh Wala to cause serious flood like situation while Flood Forecasting Division (FFD) Lahore had predicted that 100,000 cusecs to 150,000 cusecs flood water would pass by the evening of Wednesday from Ganda Singh Wala. Authorities concerned have been requested to ensure these precautionary measures to avoid any loss of life or property.