Pakistan, Afghanistan urged to focus on positives to mitigate negativity 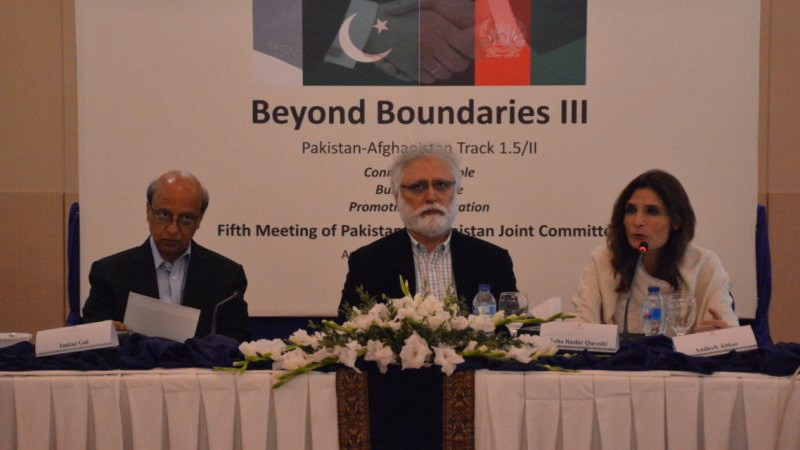 Hate does not end hate, only love can. Revenge cannot end revenge, only forgiveness can. War cannot end war, only peace can. Let us rise above hate and revenge, Federal Parliamentary Secretary for Foreign Affairs and Member National Assembly of Pakistan Andleeb Abbas quoted Martin Luther King’s words at a high-level Pakistan-Afghanistan Track 1.5/II dialogue Beyond Boundaries convened by the Centre for Research and Security Studies (CRSS) in Islamabad, urging both sides to focus on the positives first to mitigate negativity. She was of the opinion that people-to-people linkages across the border are significantly good but political will has been missing for long at the state level. Though, she optimistically stated that the power of the people is always more than the people in power. Hence, at the people’s level, there must be continued efforts towards peace and development.

A 13-member high-level Afghan delegation, headed by former Member of Afghan Parliament Khalid Pashtoon, landed in Islamabad on Tuesday to discuss bilateral relations with the Pakistani delegation of 13 members in a bid to devise recommendations to present to their governments.

Khalid Pashtoon urged all the delegates to stop digging into the blame game of the past and invited both sides to think of solutions of peaceful coexistence for the current and future generations.

Afghan Senator and Member of Afghanistan Cricket Board, Gulalai Noor Safi, stated that to further improve bilateral relations, security issues should not be allowed to impact the flow of trade, as seen in border closures, as it makes both the Pakistani and Afghan traders suffer and, consequently, makes the people in general bear the brunt. Complementing her view, Mehnaz Akbar, Member of National Assembly of Pakistan, suggested creating a bilateral parliamentary group to continue debating issues that affect people on both sides.

Member of High Peace Council Laila Jaffari, from the Afghan delegation, affirmed the need to push both governments to implement the decisions taken under the Afghanistan, Pakistan Action Plan for Peace and Solidarity (APAPPS) framework.

Further, she stated that the government of Pakistan should pressurize the Taliban to hold direct talks with the Afghan government who are the true representatives of Afghan people.

Lt Gen (r) Asif Yasin, former Defence Secretary, responded to the request in a positive manner and apprised the Afghan delegates that Pakistan is already using its full leverage in the Afghan peace talks.

The positive outcomes are visible; regional and international powers are also appreciating Pakistan’s role in lubricating the peace process, he explained. However, he maintained that Pakistan can only use its influence but does not have a decisive position. “You can bring the horse to the water but you cannot make it drink,” he said.

Khalid Pashtoon shared that some comments from the opposition leader in the National Assembly of Pakistan have hurt the feelings of the Afghan people. He requested Pakistani politicians to try avoiding linking the Kashmir situation to Afghanistan. Pakistani politicians should be cautious in this regard, he said, as Kashmir and Kabul are mutually exclusive domains.

Member of Afghan Parliament Kamal Safi was of the view that keeping the Torkham border open 24/7 will not help Afghans until Pakistan’s visa policy is “humanized.” Visa regulations and procedures will need to change to maximize the positive impacts of the Torkham crossing point to be open round the clock.

Pakistani delegate and senior journalist and analyst, Tahir Khan, inquired that while Pakistan has taken measures for keeping the Torkham border open 24/7, have the Afghan authorities taken any corresponding measures to facilitate the better movement of people and the greater flow of all goods? He stated that until that occurs, there will be no moving forward.

On the term “strategic depth” that came up in the discussion, Former Ambassador Asif Durrani commented that strategic depth was a nonsensical idea. For now, there is no such thing; if it ever was, it is long dead, he said. Strategic depth comes from a stable space not from an unstable area. After Pakistan and India became nuclear and missile states, such ideas simply vanished. Former DG ISPR and Pakistan’s Ambassador to Ukraine, Maj Gen (r) Athar Abbas, seconded the argument and asked the Afghan delegates for one valid reason how an unstable Afghanistan would benefit Pakistan. A stable Afghanistan has a positive spill-over effect for Pakistan and Pakistan wants nothing but an Afghan-led and Afghan-owned peace process for the people of Afghanistan.

Commenting on the role of the media, senior Journalist and TV anchor, Hassan Khan, commented that Afghans are a loving and affectionate people, majority of who hold Pakistan in high regard. However, it is the Afghan media that portrays Pakistan as the enemy and taints perceptions. The media fabricates negative narratives in the minds of the Afghan people, fracturing people to people contacts across the border and affecting the hope for peace in the long run.

Former Governor of Nangarhar Saleem Khan Kunduzi remarked that the top priority for the entire Afghan nation for now is only peace; but it depends on the outcome of Doha talks. Let us keep the fingers crossed, he added. As civil society members, he said, we should all be open to certain ground realities but move forward.

At the end of the day-long dialogue, which was the 17th meeting of the Track II initiative, both groups formulated policy recommendations which will be shared with the Foreign Minister of Pakistan, Shah Mahmood Qureshi, in their meeting at the Ministry of Foreign Affairs today.